With a hectic morning of last minute Xmas shopping finished I hastily pointed the car towards the Theatre of Hope for the clash with Danny Wilson's Barnsley. In recent years games against Barnsley have always seen Leeds take the season of goodwill to the extreme in donating points generously to the Tykes relegation fighting fund. Would Brian McD's team carry on this rather philanthropic approach to our South Yorkshire cousins? Time would tell. The feeling around the ground pre match was overwhelmingly positive as the chairman, fans and the wider Leeds family celebrated one year since a certain Kenneth William Bates lost control of the club to GFH. The difference is there for everyone to see, free mince pies in the bar, hundreds of junior team players parading round the pitch before kick off, the chairman dishing out pressies to fans and even Clem from the Football League show had decided Leeds would get more than the token 20 seconds on the show as he did an elongated piece to camera on the shirt tails of David Haigh's Santa Claus impression. Ex Leeds player Robbie Rogers was David Haigh's guest as he promoted his campaign "Beyond it".  All of that in front of over 31,000 fans packed into Elland Road on the last Saturday before Xmas. The new era, new start concept is so well and truly embedded at this famous old club you can almost feel Bates squirming in his own egocentric world. 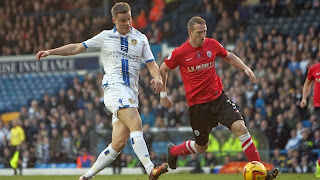 Of course all the new ideas and "fan friendly" initiatives will pale into insignificance if the team doesn't perform on the pitch so all eyes turned to the middle as the game got under way in bright sunshine. Leeds started with the same team that demolished Donny with Diouf making an unexpected return to the bench. An early goal would be nice to settle the nerves I thought as both sides came out the traps eager to stamp their early authority on this Yorkshire derby. It was the away side who had the first opportunity as Paddy Kenny conceded a corner with less than two minutes on the clock. Minutes later Matt Smith rolled Ramage and latched onto a long ball from Pearce..............the ball bounced invitingly for him just 18 yards out in the centre of the goal with only the goalie to beat...........his well struck volley cannoned off Butland though and away to safety. What a chance for the big man to add to his growing tally of goals but this time his "brawn not brain" approach let him down. 5 minutes later he had a chance to make amends but this time his attempted shot from edge of the box rolled tamely into the grateful arms of Butland.

Barnsley weren't overawed by their awful recent form and started to knock the ball about to good effect exploiting the space behind the Leeds wing backs. Chances fell to Hassell, O'Brien and Tudgay as the Tykes sought to benefit once again from some over generous Leeds defending. The referee Mr Stroud was quick to flash his cards with Murphy and Mowatt for Leeds and Mellis for Barnsley all having a yellow waved in their faces with just 30 minutes gone. The inconsistency and sheer incredulity of some of his decisions left both sides scratching their heads in despair. 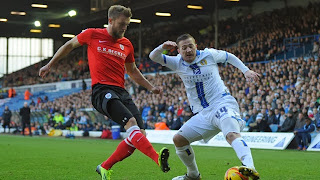 The game continued at pace as both teams looked to get the upper hand. Good approach work by Leeds was all too often undone by a less than appropriate final ball or touch. Even Ross Mac wasn't firing on all cylinders and both Mowatt and Murphy in midfield were struggling to keep possession with Murphy particularly guilty of frivolous loss of the ball with some wayward passing. Barnssley finished the half stronger as Tudgay missed an easy chance after outwitting the usually reliable Zakiulas and putting his rushed shot wide of Kenny's post. Half time arrived with the game goalless but I wasn't the only one who couldn't see the score sheet remaining blank for all the game. The Xmas spirit had percolated into the urinal philosophers at half time. "Nice mince pies" one fan beamed but Smith's early miss was clearly rankling another as he declared "My Granny would have buried the one Smith f****** missed".


Brian McD clearly didn't like what he had seen in the first half. Too often we were caught with everyone up front when Barnsley counter attacked, a recurring problem this term, add that to the restricting lack of width and pace in Leeds play and it was clear that changes were needed. Byram replaced Pelts at wing back to give a bit more width whilst Tonge returned from the wilderness to replace a largely ineffective Mowatt in the centre of midfield. The changes gave Leeds more impetus and they enjoyed an up beat start to the 2nd period. The much maligned Pugh fired a superb dipping shot that Butland just managed to tip over before Tonge got another shot away to test the impressive Barnsley keeper. Matt Smith was winning the majority of the headers but there were still too many diagonal ball pumped into him rather than crosses from wide. On the hour mark Ross Mac so nearly continued his scoring streak as Pearce dropped a lovely header back towards the Scot who fired a header goalwards for Butland to acrobatically tip over.

Nerves began to jangle on both sides as the half wore on. Leeds were having the better of the 2nd half but the Tykes looked dangerous on the break. Smith used all his strength in the box to fire a left footed shot inches past Butland's post. Poleon replaced Murphy on 80 minutes as Brian McD looked to pinch all three points with 3 strikers now pressing the Tykes defence.

Both teams were looking for the all important winner as the game entered the last ten minutes. The fiery Tudgay received a straight red for what looked like a nasty tackle on Zaliukas which in effect left Leeds with 10 men as well as Zaliukas hobbled on for the remaining minutes with all the subs already used. Leeds huffed and puffed but even with 6 minutes added time they couldn't breach the Tykes defence. The game ended a disappointing 0.0. A fair result on the balance of play though.

This was a game of missed chances. Smith was the main culprit for Leeds whilst Tudgay shared that tag for Barnsley. The point is enough to lift Leeds into 5th spot but the overall feeling of the majority of fans streaming away from Elland Road was frustration. Leeds worked hard but didn't quite get into top gear today. Austin and Ross Mac were typical of the Leeds effort...........lots of movement and endeavour but let down by some wayward last touches. It was just one of those days. Still we didn't lose. The width and pace that Brian McD yearns for was so obviously absent from the team today. News of new investment in the team has whetted the fan's appetite as the transfer window starts to open. A possible return for Max Gradel has been muted and on today's evidence he is just the type of player to make a difference in this ever so tight league. Not the best of games but there's plenty to look forward to in the New Year............and yes the mince pies were lovely!

Blackpool on Boxing day is the next challenge for Brian McD's men followed by Forest away and Blackburn at home. Three testing games over the holiday period that could just define Leeds' season especially given our awful festive form in recent years. Fasten your seat belts this is going to be a real rollercoaster ride for Leeds starting with the big one at Blackpool.............live on Sky Sports!

Have a very merry Xmas.

MOT
Posted by Andrew Butterwick at 22:25

Always enjoy reading your reports - it's good to know that my opinion is the same as someone else's!

Just can't decide whether your mixed spellings of Zaliukas is deliberate?!!

Have a good Xmas and we'll MOT!

Anon,
thanks for the comments ad I'm glad you enjoy my ramblings. As for Zaliukas or Zakiulas.........that's a Freudian slip! Well spotted.
MOT

Great commentary as always. Love your work. Merry Xmas to all and looking fwd to watching the Blackpool game here in Oz.

G'day Frank,
Merry Xmas to you and here's hoping you see a rare Leeds win at Blackpool.
MOT