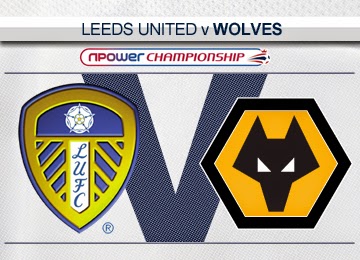 After two difficult trips to Rotherham and Norwich Leeds return to the relative sanctuary of the Theatre of Italian dreams for the clash with high flying Wolves. As ever on Planet Leeds there was much to debate as the Happy Chocker, Quiet One and yours truly made that familiar trek down Elland Road to the ground. Will the Leeds back four keep the ravenous Wolves goal machine quiet? Will Bellusci keep out of trouble for 90 minutes? Hopefully he won't compare Dicko to a "Shit Brian Montenegro"? Will Morison start in place of Douks? Who will be in this week's midfield arrangement? Will Silvestri's girlfriend Sophia start charging fans for cringeworthy Selfies? All questions that add to that wonderful pre match blend of hope, optimism and foreboding that most true football fans recognise.

Darko's team sheet again raised eyebrows as Berardi relegated Byram to the bench? Morison did start up front with Cook replacing the injured Austin in midfield. The game kicked off with Leeds looking for their first win under Darko's short reign. The young Leeds midfield opened well with Adryan, Cook and Mowatt gliding around with youthful confidence. Leeds dominated the early exchanges against their high flying opponents. Maybe for once this was going to be one of the more enjoyable afternoons at Elland Road?

On 13 minutes the much maligned Morison consolidated his good start as he latched onto an incisive ball from Pearce and lashed a shot goalwards from a tight angle............Ikeme could only parry the ball into the path of Mowatt who frustratingly slid his shot into the side netting. Leeds's momentum was building though with the visitors struggling to cope with the slick passing of the home midfield and on 17 minutes they got their just reward. Mowatt powered through from the centre circle and clipped a lovely ball to Morison on the right who picked out Antenucci on the edge of the box. The Italian coolly finished the move by shooting through the defender's legs into the bottom corner. Goal Leeds!!!!!!!!!!!!!!!

Leeds continued to have the better of the game with Bellusci commanding the back aswell as hitting some sweet balls up to the front two of Morison and Antenucci. Mowatt failed with another good chance whilst at the other end Silvestri comfortably kept out an effort from Lee Evans. Chances continued to flow for Leeds. Bianchi glanced a header inches wide, both Antenucci and Morison had shots blocked as Leeds looked for the vital 2nd goal. The half came to an end with Leeds just the one goal to the good and disappeared down the tunnel to a healthy ovation from the admiring home crowd.................just like they did for the Rotherham game!

Most of the half time comments concerned how well Morison and the team in general were playing with the slight note of caution over the single goal lead. Surely we have learnt from the Rotherham game though. Unfortunately we were about to suffer an awful groundhog 2nd half. 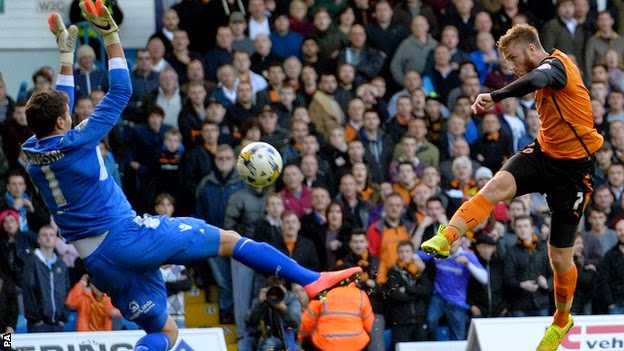 For reasons only known to Darko he changed the tactics at the start of the 2nd half pushing Morison out wide right in a sort of 4.3.3 formation. This allowed Wolves back into the game big style and they took their chance in impressive style. It was Leeds who were now on the back foot as Wolves, inspired by McDonald, danced through the chaotic Leeds midfield at will. Gone was the swaggering confidence of the first half replaced by a crisis of confidence as Leeds continually gave the ball up to the ravenous Wolves. Inevitably Wolves overturned Leeds slender lead in another painful 45 minutes for the long, long suffering home fans. Both Wolves goals had an element of luck and controversy about them but make no mistake there was only one team who were going to win the game as Leeds reached new heights in capitulation. For the record Montenegro, Murphy and Sloth came on for Mowatt, Bianchi and Adryan. Murphy was awful in his short time on the pitch as Wolves saw the game out for what at half time seemed like an unlikely win. Final score 2.1 Wolves.

Most fans strode away from Elland Road in stunned silence. Those who were talking were using words such as relegation, rubbish and clueless. What had been an encouraging first half turned into a 2nd half debacle after the bizarre tactical change from Darko. As I'm writing this blog news that Darko Milanic has managed his last game in charge of Leeds United breaks with Redfearn replacing him with immediate effect. Whilst not altogether unexpected given Cellino's hair trigger reputation the swiftness in which Massimo has reacted is breathtaking and leaves our great club once again the laughing stock of the football world................not for the first time though!

Supporting Leeds United is a birthright I carry with great passion and pride but sometimes it is bloody hard work. Still roll on Cardiff next Saturday.................will Redders still be in charge?

Posted by Andrew Butterwick at 19:04