After 2 weeks away on holiday I was looking forward to our away day at Derby. With the exotic food and drink of the holiday replaced by a few cans and Dawson's best Cornish Pasties all was well with the world as we boarded the Derby train at York for the lunchtime clash with the Rams. As usual the Happy Chocker and the Quiet One were on board as we debated the possible outcomes of Leeds's 5th championship game of the campaign. Would Byram show better form than of late? Would Wood silence his impatient critics? Would we lay the bogey of not winning at Derby since goldfish had the pride of place in the Leeds United offices? After some lively debate we settled for predicting a 5th straight draw for the mighty whites.

By the time we reached the Harvester pub in Pride Park and quenched a few more refreshments the predictions shifted to a 2.0 Leeds win as we headed towards the newly named iPro Stadium. Rosler had brought back Cook and Mowatt to replace Phillips and Antenucci in an otherwise unchanged team from the draw against Sheff Wednesday. Despite the ridiculous kick off time of 12.05pm the stadium was rocking as the game kicked off with the flag waving drum led Derby fans matching the raucous away support to produce an electric atmosphere.

Leeds flew at Derby from the off with both Dallas and Wood firing in shots within the first two minutes. Leeds early impetus was halted as Keogh received lengthy treatment after trying to head Cook's boot. The Leeds midfield began to dominate their opponents as Cook took control with his quick thinking, strong running and neat incisive passing. Dallas smashed a good chance high into the crowd before Wood had a good shot blocked in a crowded area. As the clock ticked past 30 minutes the decibel level in the away end increased as Rosler's stormtroopers continued their assault on the Rams with delightful efficiency. All we needed was a goal to reward the impressive build up play...........and to stop the dangerous Derby attackers at the other end! As if to emphasise the point Martin drifted a header just over Silvestri's bar from a teasing Russell free kick. With ten minutes to go to half time Cook snatched at a chance on the edge of the box at the end of another lovely Leeds move.

Fans from both sides were sneaking out for an early half time pint when Leeds won yet another corner. Dallas took a short corner which drew groans from some Leeds fans but the groans soon turned to ecstasy as he clipped in a searching cross which was met by Adeyemi's thunderbolt header giving ex Leeds goalie, Carson, absolutely no chance and Leeds a fully deserved lead. It was carnage in the away end as the travelling Leeds hordes smelt Ram blood. 1.0 Leeds. Minutes later the referee's half time whistle was greeted by a thunderous ovation for the team in yellow.

The half time chatter was positive after possibly the best 45 minutes from a Leeds team in recent years. Would they regret not taking more than a single goal lead into the 2nd half though?

Paul Clement the new Derby coach may have coached at Real Madrid and PSG but he was now feeling the heat as his team sat a goal down at half time still searching for their first win of the season. What ever he said in the 15 minute break worked wonders though as Derby reappeared with an extra spring in their step as they launched a fierce assault on the Leeds defence. Russell fired a chance high and wide less than a minute into the half to be followed by a thumping Hendrick shot that Silvestri tipped over the bar for a corner. The kitchen sink was raining down on the Leeds back four. Leeds cleared the corner but Derby fed the ball back into Martin on the edge of the box who gave Cooper the slip before firing a low shot past Silvestri to equalise for the home side. The flag end erupted in joy as the home fans celebrated their immediate reply to Leeds opening goal. 1.1 and game on.

Both teams went at each other throwing caution to the wind as both looked to avoid a 5th straight draw. It was the home side who now on top though with Russell, Ince and Hendrick all going near for the Rams. Leeds dug in though and on 70 minutes Rosler replaced Byram with Murphy as he tried to stem the Rams midfield dominance quickly followed by Antenucci coming on for Mowatt. The changes stiffened the away side's resolve and within a couple of minutes Antenucci squirmed his way past a couple of Derby players and placed a pin point cross on Wood's head but from just 8 yards out but the big Leeds striker's header flew over the bar. Bollox! 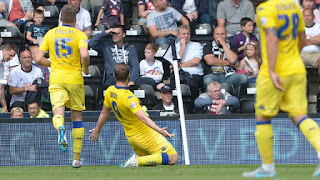 Bent came on for Derby as both teams looked for the winner in a hectic finale. The winner when it came was a thing of beauty. The imperious Cook swooped on a ball like a Rolls Royce and glided the ball into Wood on the edge of the box who took one touch and then bent a stunning shot wide of the motionless Carson to win the game and send the 2,400 away fans into delirium. Get innnnnnnnnnnnnnnnnnn! 2.1 Leeds. Even five minutes of added time couldn't prevent Rosler's stormtroopers from taking a deserved 3 points back up the M1 to Yorkshire. The away end was still reverberating to the full Leeds United songbook as a forlorn Derby steward collected all his flags up from the fast disappearing Rams fans. Rosler and his team drunk in the adulation of their adoring fans after maintaining their unbeaten record as we head into the international break. Mint! 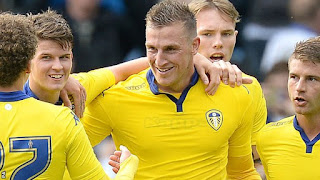 As we streamed away from the ground beaming from ear to ear a Derby fan whispered "Scum" as he hurried past making my smile even bigger. I do love winning away. Come to think of it I love winning full stop. Cook was my man of the match for another sublime performance. Berardi, Bamba, Taylor and Wood also had more than impressive games for a Leeds team that is beginning to look not only pleasing on the eye but hard to beat. Still early days yet but it's been a good August for Leeds......except for the penalties at Donny!


Brentford at home next after the international break. I don't want to tempt fate but if we maintain our run against the West Londoners I might just feel the stirrings of a good season ahead?

MOT.
Posted by Andrew Butterwick at 18:34

Fantastic team performance today. Byrams collapse in form is a concern, but everybody else is starting to knit together nicely. My only concern is how much longer are we going to be able to hide the talents of Cook and Taylor ?

Keith,
Byram is a worry. I think the plan is to bring in a winger and then drop him back to full back..............but it would be difficult to drop Barardi the way he's playing. The team is definitely coming together nicely. As for Cook and Taylor roll on 1st Sept!
Thanks for your comments.
MOT

Great to see you back posting (favourite Sunday morning read). Really think we have a 20 a season striker in Wood, the whole squad has a nice look about it.
The Byram situation is a tough one he is not a right winger and Barardi is a better right full.
Could it be possibly time to cash in on SB ?
The real eye catcher for me has been Taylor, just seems to be getting better with each game.
Cook showed us yesterday what we have missed in the last three games, pure class at times and still so young.

Thanks Tony,
The Byram debate will split fans IMO. Ideally I would keep him but unfortunately money talks. You're spot on regarding Taylor.....he just improves with each game.
MOT