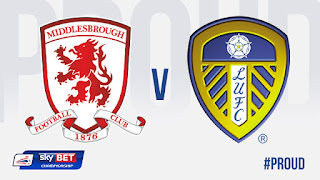 Sunday mornings are usually for relaxing and digesting the previous day's result good or bad whilst anticipating a mouth watering Sunday lunch but not this one. Thanks to Sky Sports Leeds we were heading bleary eyed up the A19 through the fog to Teeside for the lunchtime kick off at high flying Middlesbrough a trip that in recent years has been very productive for the men in white. Memories of Becchio's volley and Mowatt's early winner last year blanked out the fact that the Smoggies were looking for their 5th straight league win in their super charged start to their championship campaign. Somehow I thought that it was going to need a bit more than Rosler's plan of replaying you tube clips of the Leeds away support at MK Dons to the team to secure anything from this trip?

The early morning fog gave way to bright sunshine as we arrived on Teeside just in time to see the team news that surprisingly had 5 changes from the team that beat MK Dons. Out went Byram, Wooton, Murphy, Cooper and the injured Wood and in came Antenucci, Botaka, Berardi, Adeyemi and Bellusci. The excitement of seeing Botaka start was more than tempered by the baffling decision to replace Cooper with Bellusci? Why when Cooper had been playing so well? Soon the conspiracy theorists were smelling intervention by Cellino now that Pearson was out of the way.............as if!

The Riverside Stadium was nearly full and the atmosphere was just about at boiling point as the game kicked off. Leeds started with a promising attack that ended with a cynical foul on Dallas by Boro's Stuani a pattern that would repeat itself for most of the game. Boro regained the ball from the free kick and ventured up field where the afore mentioned Stuani turned Taylor inside out before delivering a decent cross into the box. Bellusci was in pole position to head the cross clear but in a moment of pure slapstick he slipped on his arse allowing the ball to drop to Nugent on the 6 yard box. He was never going to miss from there and he didn't. His celebration in front of the massed away fans drew the expected response from the disappointed Leeds support. 1.0 Boro and the home fans were bouncing with just two minutes on the board.

The game became a stop start affair as the ref allowed too many niggly fouls to go uncarded. Botaka had some neat touches early on as he settled into his debut impressively. Leeds looked nervy though and on 11 minutes Bamba nearly gifted the Smoggies a 2nd goal as he tried to chest a cross into Silvestri's top corner. Good job the athletic Italian was at his best as he turned the ball round the post for a corner. Leeds did start to test the Boro defence though with Antenucci scuffing a shot at the goalie then Botaka skipped past his man and fired a shot goalwards that was blocked by a Boro leg. Adeyemi strolled onto a shot and then hit it hopelessly wide.

The Boro manager, Karanka, has moulded a good well drilled team at the Riverside and they were happy to soak up any pressure before looking to counter attack with their speedy forwards. Their defensive plan is simple. Cut out any attacking moves, usually by a foul, and then spring a wall of steel around the box for the set piece. It was certainly working aided by a very tolerant ref.

Bellusci's return the first team starting line up got even worse on 30 minutes. The hugely impressive George Friend found space on the left flank and hit a cross into the box. With no Boro player challenging and clearly no communication between Bellusci and Silvestri the Italian centre half launched himself at the ball and thundered a bullet header into the Leeds net. What a dick! Boro 2:0 and the home fans were in dreamland. Boro had had one shot on goal and they were two up.

Leeds continued to try and recover their self inflicted goals with first Dallas hammering a stinging shot straight at the Boro keeper and then Mowatt jinking to the edge of the box before bringing a fine save from the home keeper. Boro nearly added to their two goal lead right on half time as Stuani headed a far post Downing cross over from inside the 6 yard box. HT 2:0 Boro.

The relative silence amongst the away fans spoke volumes for their frustration at gifting a team with such a good record as Boro a two goal start. Botaka had shown some nice touches and Cook and Mowatt had battled hard in midfield so maybe we could get back in it in the 2nd half? The fire alarm messages on the tannoy interrupted the HT announcer naming the lottery winners so we assumed there wasn't a fire after all although at two nil down I'd have taken an evacuation.

Leeds started the 2nd period with a bit more more purpose despite the continuing niggly fouls disrupting nearly every Leeds attack.The Boro plan nearly come unstuck though on 52 minutes when Mowatt curled a lovely free kick towards the top corner only to see the Boro's Greek keeper turn it over for a corner. Leeds were now starting to build up a head of steam as the decibel levels increased in the away end. Berardi picked up a loose ball 30 yards out and shot through a crowd of players..........Cook helped at on it's way to Antenucci who slotted the ball home to the delight of the travelling hordes. A glance across to the linesman showed no flag as we celebrated a deserved goal. But wait........the referee wasn't happy. He walked to the linesman to consult with him. Why when he didn't raise his flag? The ref then decided he was offside and disallowed the goal. Clearly he had a better view from 20 yards behind Antenucci than the linesman had direct in line with him! Utter Bastard.

The injustice lifted Leeds and their supporters and now the Boro parked bus was creaking. Botaka flew down the wing and delivered a delicious cross right onto Antenucci's head just 7 yards out get innnnnn I screamed as the Italian's header went straight at the Boro keeper. As a reward for his scintillating run Botaka was replaced by Doukara. Mmmm not many Leeds fans could fathom that one out. If Botaka was tiring what about Byram? What about Ethel the Tea Lady? Surely they would come on in front of Doukara? Leeds seemed to lose some momentum with the substitutions and although they continued to plug away another disaster was waiting around the corner. With ten minutes to go Bamba received the ball along the back and slipped leaving Fabbrini the simple task of rounding Silvestri and driving another self inflicted stake through the heart of Leeds United. 3:0 Boro and game over.

There was still time for Leeds to push forward but all to no avail. Boro ran out comfortable if not slightly flattering winners at 3:0. The only two shots the home side had on goal were two of the goals. Leeds actually had the same number of shots on our goal as Boro with Bamba's chest effort and Bellusci's own goal. Botaka had a good debut and Cook once again showed what a talent he can be. Adeyemi disappoints me with his laid back approach to the game especially when the opposition are clattering us at every tackle. As for Bellusci at the back he was 90 minutes worth of a constant liability. Still don't understand the logic in dropping Cooper for him? Karanka has got his Boro side well organised and with no little skill. Add the cynicism of their defending and they are clearly one of the favourites for automatic promotion at this early stage of the season.

At least the drive back through the glorious sunshine took some of the sting out of the defeat but Rosler now faces a run of games that could define Leeds season against Brum, Brighton, Fulham and Bolton. Interesting times ahead on Planet Leeds especially with Sheriff Cellino stomping about like a loose canon. Roll on Birmingham................

Posted by Andrew Butterwick at 18:55