Even in the highly charged and chaotic atmosphere that continually surrounds Planet Leeds this week has been surreal. On what is now known as "What the fuck's going on Monday" Rosler was sacked, Evans was appointed, Cellino was banned yet again and finally Cellino appealed. The following day his bizarre decision to cap away fan numbers was reversed. Wow! I know being a Leeds fan is a calling that brings with it certain conditions similar to the early religious sects wearing a hair shirt to prove they were committed but Jesus Christ........talk about being punch drunk with chaos. 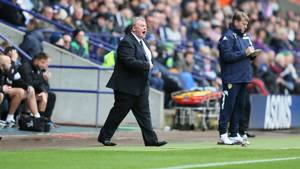 After the whirlwind events of the first part of the week we then went to Fulham and played probably the best we'd played all season! Not only that our new firebrand Scottish coach was then giving sensible, witty and passionate media interviews. Suddenly the Leeds family was alive again despite the mad Italian lurking in the back ground waiting to throw another hand grenade into the mix. It was against this background that we headed to The Macron Stadium for the clash with Bolton oozing with confidence. Bizarre!

The slate grey skies over the Bolton ground weren't exactly welcoming for the 4,500 travelling fans as the game got under way. Steve Evans stuck with the same starting line up as the Fulham game with the only change on the bench as Doukara replaced the poorly Botaka. Mmmm!. The first ten minutes were dominated by the home side as Leeds struggled to regain the tempo and passion from the midweek game. Gary Madine suffered a head injury and had to leave the field after a long delay. Up stepped Ameobi from the bench to replace the Bolton striker. Ameobi arrived at Bolton on a free after failing to find anyone who wanted him which was a tad strange despite his chequered career at Newcastle. No sooner had he been on the pitch 2 minutes that the Happy Chocker put the fans curse on him with the comment "he's useless he'll never score in a million years" Cue a hat trick I replied! It soon became evident that the speedy and tricky Feeney was the ideal foil for the ex Newcastle man as they combined to give the Leeds back four an uncomfortable time. Thankfully Feeney's finishing wasn't as good as his approach play on 20 minutes as he wasted a golden chance to score the opening goal when his shot curled wide of Silvestri's post.

At the other end of the pitch Cooper combined with Adeyemi from a corner only to see the midfielder's shot hit the base of the post. The game was by no means a classic as the massed banks of away fans began to get restless with the lack of penetration from the men in yellow. Then on 30 minutes the Happy Chocker's careless comments about the Bolton substitute came back to haunt him. Feeney was the initial instigator as he caused havoc down the left flank before launching a deep cross to the back post. Silvestri came for the cross like a demented frightened swan as he flapped at the ball only to turn it round for a corner. The corner came low into the box where the ball bobbled up to the unmarked Ameobi who drilled it into the net for the first goal. The home fans were now awake and I was frowning at HC. 1.0 Bolton.

The game continued in a scrappy vein. Byram got a yellow for an agricultural challenge on a Bolton player as Leeds struggled to find any real rhythm. Silvestri pulled of a good save from Feeney as the half finished with the Trotters still a goal to the good. Muffled boo's were heard from the away end as the teams disappeared down the tunnel. Steve Evans Honeymoon period was in severe danger of lasting just 6 days as the Leeds fans discussed the poor first half performance. To be fair to him he's only got the same players who got Rosler the sack.

Evans replaced the misfiring Murphy with Mowatt at half time and this helped Leeds lift the tempo. The hard working Antenucci had the first chance of the 2nd period as he escaped his marker only to bury his shot in the side netting. Leeds started to get the better of the bottom side in the League and on 55 minutes Adeyemi so nearly claimed the equaliser as he saw his shot turned agonisingly onto the post by the home keeper. Ameobi continued to amble about up front for Bolton but proved very difficult to dispossess as he gave Cooper a bruising afternoon. Salvation was just round the corner for Leeds though in the shape of Antenucci. 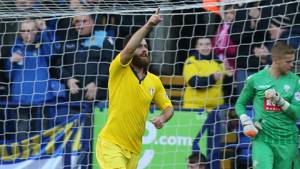 The Italian forward made the most of a horrendous mistake on the half way by a Bolton defender as he sprinted away towards the goal. Prince chased him down but as Antenucci primed his right foot for a shot in the box the Bolton defender made a right royal hash of his tackle and sent the Italian crashing to the floor. PENALTY and a red card to boot. Mint! While the referee dispensed Prince to the dressing room Antenucci grabbed the ball and put it on the spot despite protests from Wood. Antenucci won the debate and coolly placed the ball past the Bolton keeper for the equaliser. 1.1 and the frustrated away fans were suddenly in good voice again.


Leeds now looked to capitalise on the one man advantage as they went in search of the win. Buckley replaced Dallas and immediately made an impression with some nice touches and crosses into the box. Problem was there was rarely anybody in a yellow shirt on the end of them. Leeds huffed and puffed but couldn't blow the Bolton piggies house down. The nearest they came was a weak Mowatt free kick from 30 yards. The referee blew his final whistle to signal the end of the game with the scores tied at 1.1. Not all the Leeds fans were happy with the performance as the team applauded the loyal fans who had followed them over the Pennines. A frustrating end to a game we should have gleaned more than a point from.

The excruciating slow exit from the roads around the stadium left us time to reflect on Steve Evans 2nd game in charge. Chris Wood is fast becoming another in a long line of Leeds strikers who actually don't score goals. He doesn't seem to anticipate enough when the balls flung into the box and when he does get a chance he struggles to put it away. Steve Evans said publicly this week he was looking to bring fresh faces in. A striker and a goalkeeper would be my bet he's looking at. Pity we didn't pick Ameobi up? All in all a disappointing draw against the team holding the championship up.

Blackburn Rovers at home next Thursday (wtf don't get me going about Thursday night football). A chance for Leeds to break their winning drought at Elland Road? If they do Evans will be on a roll. I can see the tension being high around LS11 on Thursday night though.............

Posted by Andrew Butterwick at 20:08