Despite another week of farcical news oozing out of Elland Road the Happy Chocker , Quiet One and yours truly were heading to LS11 for our clash with our East Yorkshire cousins, Hull City. Whether it's Piegate, Cellino's alleged QPR half time team talk, Byramgate or the claim that all the players are up for sale this was another mind boggling week on Planet Leeds. The disillusionment, anger and bewilderment amongst the vast majority of fans grows with each outrageous decision the Mad Italian makes to such a level that sadly nothing he does is a surprise any more. It was against this background that we tried to find any smidgen of hope for a Leeds success against the Codheads as we gloomily quenched our pre match thirst. "Bamba should be back" I offered as a positive but quick as a flash HC shot the perfect negative back at me "yes but so is Snoddy" Gloom descended again.

The storm clouds were gathering , literally, as we made our way into the ground. My hope that Bamba would be back was cruelly dashed as he pulled his big posh car into the Elland Road car park ahead of me with just 35 minutes to the kick off. Further team news revealed that Evans had gone with Wood as a lone striker with a 5 man midfield containing both Bridcutt and Adeyemi in the starting eleven. Wootton kept his place at right back with Byram yet again on the bench. Mmmm there weren't many positive reactions to the team news as I took my seat begrudgingly.

The wild, stormy weather whipped up a varied mix of rubbish on the Elland Road pitch and that was before the teams came out. The game kicked off with Leeds immediately on the attack as the much maligned Wood laid off a perfect chest to Dallas who was brought down as he skipped past the Hull defender in front of the packed travelling Tiger's fans. Mowatt lined up the free kick out wide but not for the first time this season a Leeds set piece fizzled out frustratingly as McGregor in the Hull goal plucked the ball out of the air with ease. This was the prequel to a very open and attacking first 20 minutes to the game as both teams battled the blustery conditions with no little skill. Hull's ex Leeds defender Bruce forced a save from Silvestri before Dallas fired high and wide for Leeds at the other end. There was an extra snap to Leeds' play that we hadn't seen in recent weeks led by Bridcutt in midfield. Not only was he visibly vocal with his team mates he was clattering into the opposition whenever they had the ball. Maybe today wasn't going to be that bad after all?

Leeds continued to battle well against their high flying visitors. Bridcutt won a free kick on the edge of the box then Bellusci hit the free kick too near to McGregor. On 17 minutes with the match unusually gripping the attention of the home crowd hardly any fans left for the much hyped protest. The few that did missed Mowatt crashing a free kick into the wall from a promising position. Leeds were playing with vim and vigour all over the pitch as they began to pressurise the visitors into mistakes. This was not the Leeds United I was falling out with!

Cluclas should have put Hull ahead just before the half hour but he failed to hit the target from a searching cross from Elmohaday.  On 30 minutes though Leeds got their reward for an excellent opening to the match. First Bridcutt hassled a Hull player and relieved him of the ball before rolling it to Cook. Cook moved into overdrive before putting a slide rule ball behind the Hull full back into the path of the flying Dallas who's first time cross was met be the rejuvenated Wood to steer it home to give Leeds the lead. Fantastic! What a goal and Leeds were 1.0 up. The Tigers were now rocking as Mowatt hunted down Mcguire forcing him into a mistake but the youngsters left footed shot rattled the bar with McGregor motionless in the Hull goal. 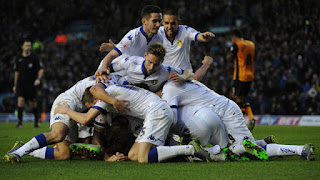 Leeds were now on a roll and further pressure saw a flurry of corners as the decibel levels cranked up around Elland Road. On 44 minutes the roof came off the old stadium. Cook pounced on a second ball from a corner and thundered a shot goalwards.........McGregor stretched to save it but Adeyemi was first to react and smashed the ball into the Hull net. 2.0 Leeds and the place erupted in a mixture of joy and disbelief. Half Time and the score was 2.0 to Leeds. As I made my way to the Urinal philosophers there was some unusual looks on all the Leeds fans faces. I think they are called smiles something I can't remember seeing for a very long time. "F****** brilliant" was one fans comment whilst another glowed "Bridcutt's like a little terrier" For once all was right with the world on Planet Leeds. What could possibly go wrong?

Hull emerged from the dressing room for the 2nd half with a steely determination and soon Leeds were on the rack as the East Yorkshiremen attacked Leeds like a wounded Tiger. Leeds couldn't get a sniff of the ball as they pinged it about the Elland Road turf. After just 6 minutes they got their just reward as Elmohamady climbed all over Taylor to send a bullet header past Silvestri from 6 yards. 2.1. "This could be a long half" HC mused.

Within a minute though the kop were screaming for a penalty as a swift Leeds counter attack saw Cook pulled down in the box just as he was about to connect with a teasing cross from the right. Bollox! A minute later the young Cook got a yellow card for a tackle driven out of frustration at not getting the spot kick. Hull were now dominating the game as they patiently launched attack after attack. Livermore, Diame and Huddlestone all drew saves from Silvestri as the Tigers turned the screw looking for the equaliser. On 70 minutes Akpom replaced Mcguire for Hull and Byram came on for Dallas. "One Sam Byram" drifted up into the Beeston air as the fans showed which side of the Byramgate debate they were on.

Leeds still had some defending to do though if they were to protect their slender lead. Hull born Cooper was magnificent at the heart of the Leeds defence alongside Bellusci as the weary Leeds side scrapped for every tackle. Snodgrass came onto to a generous round of applause with just 10 minutes to go, Within two minutes he delivered a typical teasing cross that Akpom really should have scored from but his header drifted aimlessly wide. Nerves were jangling as the clock appeared to be going backwards. Doukara came on for Wood who got a standing ovation for his best game in a Leeds shirt by a country mile. The home fans started to celebrate as the game inched into added time but Hull couldn't break the Leeds resolve and the game finished 2.1 to Leeds. Unbelievable!

Smiles abounded as we strode back to the car. Bridcutt and Cook were peerless in midfield. Wood was a handful all afternoon up front. Even Wootton had a good game. The whole team played with pride and passion and thoroughly deserved the three points. Bridcutt was my man of the match for his tenacious and non stop hassling of the Tigers midfield. Brilliant. Even more brilliant is the fact I work in East Yorkshire within spitting distance of Hull. I won't have any trouble getting up to work this Monday morning?

I've said it many times but football is a funny old game. Last week we were atrocious against a poor QPR side but this week we played like our lives depended on it and beat one of the teams who will be competing for one of the automatic promotion places. Next up is another trip to London to play struggling Charlton. A week's a long time on Planet Leeds though.....................


Posted by Andrew Butterwick at 19:31

Could this be the kick start to our season, believe the players are well capable (just need to get some belief) and we should the start the climb up the table.
Re Byram I know your a fan, but I feel the lad is being badly advised, better than Wotton but not Berardi. LUFC will lose out as he will go for a lesser value (if not free) than a couple of seasons ago.
Anyway top read as usual MOT

Always enjoy your reports, like them even more on the rare happy days. MOT

Thanks for the comments. Roll on Charlton.

Being a Leeds fan now living in Spain it's great to get an unbiased report that tells it how it is, so thanks and keep up the good work.
MOT

Derek,
Thanks for the kind comments. Spread the word!
MOT