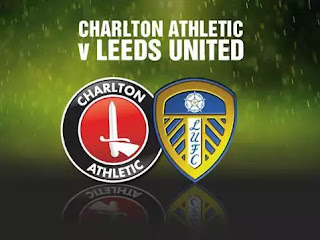 After a relatively calm week on Planet Leeds we headed south for the clash with Charlton Athletic at the Valley. Buoyed by last week's success against high flying Hull optimism was once again infiltrating our pre match discussions as the train hurtled down the familiar East Coast line towards the capital. The midfield combination of Bridcutt and Adeyemi had blended perfectly with Cook, Mowatt and Dallas against the Codheads so we were anticipating more of the same against a struggling Charlton side. Wood had for once showed some class leading the line aggressively and causing the miserly Hull defence plenty of problems whilst the Leeds defence had battled impressively against the 2nd half onslaught from the wounded Tigers. Helped by some necessary thirst quenching we had virtually got the game sewn up before we arrived at Kings Cross. Oh the joy of pre match football logic!

As expected Evans went with the same starting eleven that thwarted Hull which meant both Berardi and Byram on the bench. 3,200 Leeds fans had packed the away end hoping for a more productive afternoon than the last trip to the capital and the loss to QPR. Charlton started the game on the front foot and had the first chance when the wonderfully named Reza Ghoochannejhad got behind the Leeds back four only to see his shot from a tight angle go through Silvestri's legs and roll agonisingly wide of the post. Charlton's bright start soon faded as both teams conspired to serve up an uninspiring contest of huffing, puffing with very little flow to the game. The soporific first 45 minutes came to end with the score at 0.0. Silvestri was tested once whilst the Charlton goalie only had a relatively tame Mowatt free kick to deal with. Not the stuff to get the adrenalin pumping by any stretch of the imagination. After last week's barnstorming first half from Leeds this was more a kind of sleep inducing effort from the men in yellow. Could they change it for the 2nd 45 minutes?

The 2nd half started in a similar fashion but within minutes Evans withdrew Wootton and replaced him with Berardi. All of a sudden Leeds began to look a little more dangerous as Berardi and Dallas found some joy attacking the right hand flank. Dallas forced a save from the Charlton keeper before once again getting to the bye line but his cut back evaded the oncoming Cook. The decibel levels in the away end cranked up fed by a now eager attacking Leeds side. Taylor crashed a well worked pass from a corner over the bar to the frustration of the now baying Leeds crowd. Silvestri soon reminded us of his excellent shot stopping ability when he turned a shot from the illusive Vaz te round the post for a corner. Botaka entered the fray as the game became more open and end to end which was much to Leeds advantage. 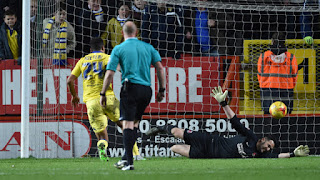 Vaz Te tested Silvestri again but all the momentum was with Leeds now as they turned the screw. Chances for Adeyemi and then Cook were horribly spurned as the home defence started to creak. Why didn't they do this in the first half I pondered? Surely we must score? Dallas time and again went past his marker on the flanks but the Charlton goal remained intact. On 80 minutes the game's pivotal moment arrived. Wood slipped the ball to Botaka who neatly laid the ball back to Adeyemi on the penalty spot. Yesssssssss I screamed as the Leeds midfielder lined up his shot but somehow he managed to scuff the shot past the goalie and onto the post. Triple Bollox! That should have been the winner. Leeds continued to attack the home defence............Cooper then Berardi both had shots with plenty of power but lacking accuracy as the 90 minute mark loomed with the game still 0.0.

On 90 minutes Berardi picked up what looked like a serious injury and reluctantly Leeds sent on Byram for the final moments.Further pressure from Leeds led to one final corner but alas the game finished all square. The frustrated away fans applauded the team off the field before reflecting on what might have been if we had played for 90 minutes with the intensity we played for the last 20. It felt very much like two points dropped rather than one gained in my eyes but after the very forgettable first half I was just glad there was a bit of decent action to watch in the second 45 minutes.

After patiently getting through the long queues to the trains we had plenty of time to reflect on the game during the long trip home. Difficult to pick a man of the match today. Cook and Dallas did well as did Botaka when he came on. Bridcutt put a good shift in at the heart of the Leeds midfield and Silvestri looked assured in the Leeds goal. This was another game in the championship though that shows how little there is between the top and bottom of the division. Last week's victory against Hull didn't guarantee a win against a team in the bottom three. Onwards to Wolves for our next game on Thursday night to fit in with Sky TV's Ten in Ten promotion. Well whoever dreamt that one up at Sky wants slow roasting over a roaring fire. Thursday night Football is not fair on true fans. Never has been never will be.

Despite the ridiculous kick off time Wolves does offer us the chance of another 3 points...........if we play for the full 90 minutes. You never know Byram might even get a start?


Posted by Andrew Butterwick at 23:25