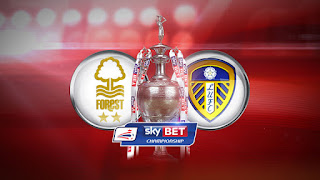 Xmas is a time for tradition and families coming together. Unfortunately the tradition in recent years within the Leeds United family is for everybody to get together on Boxing Day and share their tales of Xmas day whilst watching their loved ones ruin yet another festive season with a less than impressive performance on the pitch. This year would be
different though. For one we were playing at 4.30pm on the day after Boxing Day in order to suit the Lords and Masters at Sky TV and another we arrived at the City ground Nottingham unbeaten in December. The pre match positiveness took a slight knock when we looked at Forest's recent impressive form as they appear to have recovered from an awful start to the season with a productive run of games through December themselves.


So after enjoying the pre match hospitality at the Notts County club we joined the army of fans with new hats, jumpers and scarves heading across the Trent Bridge to the ground ready for the Sunday tea time clash of two sides who once dined with the European elite before descending into the dog eat dog wilderness of the Championship. Evans kept the same team that disposed of Preston with Adeyemi and Sloth replacing Mowatt and Phillips on the bench. A near capacity crowd had packed into the City Ground as the game kicked off in drizzly weather. Lewis Cook was first to show as he strode through the retreating Forest defence before pulling the ball back for Dallas who screwed his shot wide. The encouraging start continued from Leeds as they pinged the ball about from wing to wing with a smoothness and confidence that offered real hope of a result on the banks of the Trent. The early Leeds pressure saw Wood flash a header wide from a corner and then Byram surged into the penalty area before being brought down by a desperate Forest leg..........PENALTY! Well no the referee booked Byram for simulation?????

Leeds were dominating the game and with 1900 raucous away fans urging them on surely it was only a matter of time before they turned their dominance into goals? Well not quite. On 17 minutes Matt Mills played a long ball beyond the Leeds back four...........Bellusci tried and failed to cut out the pass whilst Silvestri hesitated slightly before coming all the way to clear the ball but Oliveira nipped in before him and rolled the ball into the empty net. 1.0 Forest and the home fans were in dreamland.

Leeds continued to dominate possession with Bridcutt at the centre of the majority of Leeds moves. Murphy found space to get a shot away but it deflected wide. Dallas tried his luck from an acute angle while Wood rose high at a corner but his mis-timed header flew high and wide. On the flanks both Wootton and Taylor were constantly overlapping and causing Forest problems. Despite been one goal down I felt it was only a matter of time before we converted possession into goals. At the other end of the pitch Mendes and Oliveira were testing the Leeds back four but both Cooper and Bellusci were holding firm. On the stroke of half time Wootton and Cooper clashed heads just as the referee blew for half time. 1.0 Forest.

Most fans were satisfied with the first half performance. Taylor played virtually as a left winger whilst Murphy, Cook and Bridcutt were winning their midfield duels. Only problem was.....could we convert any of the chances?

The second half resumed with Forest enjoying a spell of pressure. Oliveira struck a dangerous free kick over the bar shortly followed by another shot after good work by Vaughan. Leeds did settle though and soon regained the Lion's share of the possession resulting in a couple of corners. Byram couldn't quite get the power on his header to trouble the Forest goalie though. Then Wood had the sort of chance that he must dream about. Lewis Cook collected the ball in midfield and picked out Wood who made a perfectly timed run beyond the Forest back four onto Cook's sublime pass............he was now 12 yards from goal with only the goalie to beat but somehow managed to snatch at the chance and send the ball into the upper tier of the stand. Bollox and double Bollox! He should have buried that.

The game opened up as Forest looked for the killer 2nd goal. Osborn, Mancienne and Matt Mills all had chances either blocked or headed off the line whilst Leeds were going for broke at the other end with Byram and Dallas going close with headers. Leeds needed a goal though. On the hour Doukara replaced Cook and Ward came on for Forest. The game was now a thrilling end to end affair. Ward sprinted from midfield and stung Silvestri with a rasping 25 yard drive. Leeds responded by attacking quickly on the counter but still lacked the killer touch in the final third. Antenucci replaced Dallas as Evans went for broke with a change to a 4.4.2 formation. 15 minutes left for Leeds to rescue a point. 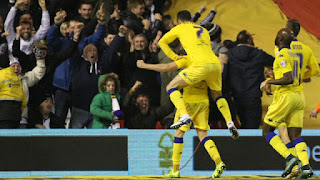 Forest were now creaking at the back as Leeds searched for an effective shot on goal. On 79 minutes they eventually found the right formula. Doukara made space in the inside left slot and jinked back inside before laying the ball sideways to Byram who hit a 25 yard bullet past De Vries in the Forest goal. Get in and absolute carnage in the away end as the 1900 Leeds fans celebrated the equaliser like only they can. The decibel levels were now at maximum as Leeds went for the winner. First Antenucci screwed the ball wide with the goal gaping after a terrific run by Wootton then as Leeds went for bust Wood found himself 7 yards out but fluffed his shot....................Nooooooooooooooooooooooooooo!

Forest weren't done though and they got themselves up off the canvas and pushed for the winner. Ward went close with two shots before Burke scrambled a shot against the post with Silvestri beaten. 3 added minutes. Murphy tried an intricate curling shot but missed and then finally Cooper scuffed a shot with the final kick of the game. Phew. What a game. It wasn't the best technically but the way it swung from one end to the other certainly kept the crowd on tenterhooks for most of the game.

So Leeds kept their unbeaten run going after an entertaining game. Byram just sneaked the MOM from Bridcutt for me with Murphy and Taylor also catching the eye. Wootton had a good game despite or possibly because of the bang on his head he got in the first half. Walking away from the ground felt like a victory after scoring so late. We've played worse and won this season. Derby up next on Tuesday at Elland Road. Can we do the double over the East Midlands side? I do hope so........

MOT.
Posted by Andrew Butterwick at 23:15