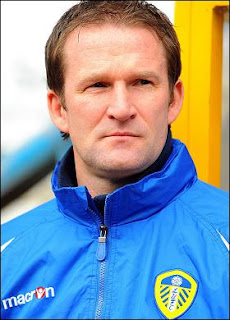 In a Galaxy far, far away the inhabitants of Planet Leeds were tentatively preparing for the oh so important Christmas rush of games. After Thursday's thrilling win at Wolves hopes were high that Leeds would continue their newly found attacking force field against the miserly defence of Simon Grayson's current Preston team. There's a rich irony there as it was the notoriously porous defence of Grayson's Leeds team that ultimately cost the Leeds prodigal son his job at Elland Road a fact no better illustrated than on Preston's last visit to ER Grayson's Leeds threw away a 4.1 lead to incredibly lose 6:4. Let battle commence!

So after postponing the usual Sunday lunch we joined the throng marching down Elland Road to the accompaniment of a heady mix of the smell of fried onions and the incessant pre match chatter in the sunny but chilly December weather . Will the Fat One stick with 4:4:2? Will Doukara start? Has Byram signed his contract yet? At least this temporarily took the Happy Chocker's mind off the fact that he had just worked his last shift at the last deep mine in the UK. The decision to close the pit whilst there is still good coal to be cut will be seen by History as short sighted and naive at best and criminal at worst. Still we will always be able to rely on the stable regimes in Russia, China, Columbia et al to supply the coal we need won't we?

Back to football matters and Steve Evans team selection saw just one change with Murphy coming in for the injured Adeyemi in a 5 man midfield with Wood up front. Simon Grayson received a warm reception from the Leeds fans in a crowd of 22,000 as the game got under way. Preston started well with Silvestri called upon 3 times in the first ten minutes to deny decent efforts from Gallagher, Keane and Garner respectively as Leeds struggled to get a foothold in the game. Then Taylor got Leeds in the game with a superb cross that Wood could only head wide but Preston were showing plenty of signs of why they have had such a productive run of late in the Championship. The Leeds midfield, inspired by Bridcutt, did start to have some joy though creating two good chances for Wood the best of which the lone Leeds striker spurned when one on one with the Preston keeper Pickford.

Leeds battled on in what was a scrappy opening period as the clock approached the half hour mark Wood was denied by Pickford this time from a header that he tipped over the bar. Then came the key moment of the game. Wootton hit an ambitious ball forward beyond the high Preston back line for Wood to chase. The Leeds striker got there just before the advancing Pickford and nodded the ball goalwards only to be denied by what seemed to the arm of the Preston goalie outside the box. Free kick to Leeds but what would the colour of the card be? To Preston's dismay it was red and the Lancastrians were down to ten men. Not only that Preston only had their Youth keeper on the bench after the normal back up, Kirkland, had been taken ill. Lovely. Surely Leeds would now bombard the 17 year old with shots and crosses to test his nerves?  Mmmm maybe not as it turned out.

Bellusci put the resulting free kick inches over the bar. Leeds enjoyed a period of pressure up to half time but couldn't convert any of the 4 or 5 corners their attacking play yielded. Half Time 0.0. After an underwhelming 45 minutes of Football the urinal philosophers were muted in their half time comments. "We should make the extra man count in the 2nd half" one fan thought whilst another questioned Wood's goal scoring ability "I bet he can't even finish a pint". Others were reflecting on the news of the date change for the Brighton away game although they're not printable even for this blog. Suffice to say they didn't think it was very fair for the fans.....or words to that effect!

The second half started with a bang. Leeds attacked immediately down the left flank with Dallas tormenting the Preston full back before swinging a teasing ball into the box where the Preston centre half Browne gave Wood a master class in finishing as he sent a bullet header past his young goalie. 1.0 Leeds. Just what the doctor ordered. Now we can kill the ten men of Preston off and extend our recent unbeaten run I thought? Well not quite. It started well with Byram winning a free kick on the edge of the box but Taylor's free kick sailed into the kop and from there on in Leeds tried ever so hard to press their well worn self destruct button as they allowed Preston to dictate the majority of play despite having the one man advantage.

On 54 minutes Kilkenny came off the bench and immediately started to torment Leeds with his passing game. Not only that the Leeds midfield gave him enough space to drill three shots into the overworked Silvestri in the Leeds goal. Leeds were crumbling before my eyes as I desperately glanced at the clock hoping to see the 90 minute mark approaching. It showed 64 minutes gone. "We'll never keep em out at this rate. I thought they were supposed to have ten men" one nervous fan beside me moaned. Not for the first time at Elland Road it was squeaky bum time as my finger nails started to disappear at an alarming rate. It's not as if we didn't have chances to finish them off as they pushed forward but every time we broke the final ball was just poor at best and criminally wasteful at worst. Doukara and Antenucci came on for Murphy and Wood respectively. We were winning but it felt like we were losing. Leeds United do that to you.

Preston continued to batter the eleven man Leeds team right to the last but thankfully the referee finally blew his whistle with score still showing 1.0 to Leeds. Phew! It was a relieved Leeds crowd that headed away from Elland Road into the cold West Yorkshire night air. Silvestri was the man of the match by a country mile in a frustrating and disappointing Leeds performance. Maybe the quick turnaround from Thursday's game didn't help but today's game was the classic "the result was better than the performance". Statistics don't lie though and the fact that Leeds managed only one shot on the young replacement goalie speaks volumes for how Leeds mismanaged this game. Still that's 4 games unbeaten in December with 10 points out of the last 12 something that seemed impossible on that long train ride home after the QPR defeat.

Forest away is the next hurdle for Leeds on the Sunday after Xmas and naturally it's on Sky Sports Leeds. Can Steve Evans team keep the momentum going into the New Year? Here's hoping! Finally a Very Merry Xmas to all my readers.


Posted by Andrew Butterwick at 19:22

Thanks for the report, actually going into Christmas in a positive state of mind,fantastic!
Merry Christmas. Mot