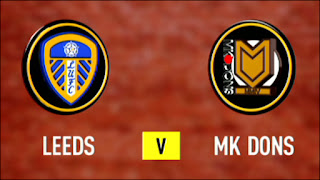 There was an unusual air of real hope and optimism on Planet Leeds for the first game of 2016. It wasn't just the unbeaten run through December but also the way the team has gelled together into a team that is now difficult to beat. In fact if we were able to cut out the numerous defensive aberrations we are afflicted with we would be cruising up the table towards that oh so important play off zone.

Pivotal to our recent performances has been the excellent form of both Bridcutt and Byram but would they still be wearing the white of Leeds come the 1st Feb? That was the key topic of pre match debate as the Happy Chocker, Quiet One and your's truly joined the throng of fans heading down Elland Road for the game against the MK Dons. Would this be Bridcutt's last game? Would Byram or any other of the young guns be tempted away to the bright lights of the Premier League? Had Steve Evans joined weight watchers for the New Year? All key questions as we waited for kick off.

The miserable weather engulfing Elland Road couldn't dampen the spirits of the fans as they digested the team news. Wood replaced by Doukara and Adeyemi dropped to the bench in favour of Cook. Erwin was on the bench. Then the game started. With Leeds sticking with the 4.5.1 formation Doukara would need to play as the lone striker and as was soon very evident this is not a role he enjoys or really understands. Still we were only playing MK Dons so we should be be able to overcome that problem shouldn't we? Well no we didn't! The tempo of the Leeds performance was set in the opening exchanges as Captain  Bamba sent his first three passes straight to a red shirt. After their recent impressive performances Leeds suddenly seemed to have lost all their rhythm and fluency as move after move faltered on the final pass. Maybe the Leeds players were still suffering from too much partying on New Year's Eve or maybe without the pivotal Wood as lone striker the 4.5.1 system doesn't work? What ever the reason the first half hour was littered with an explosion of missed passes and shocking decision making. It was no surprise that the visitors took the lead on 30 minutes.

Maynard escaped down the right flank and pulled a lovely ball back for the illusive Hall on the edge of the box who finished sweetly past the helpless Silvestri. 1.0 MK Dons. Things went from bad to worse for lethargic Leeds. Taylor twice brought down Hall in the box with what seemed liked blatant fouls but to my amazement the ref disagreed. Maybe he was just being sympathetic considering the way Leeds were playing? Half time couldn't come quick enough. 1.0 to MK. Not surprisingly the urinal philosophers had all forgotten the recent good run by Leeds as they laid into the woeful first half performance. "We're that f****** shite we're even missing Chris Wood" one punter declared. "Why, why, why do we play 4.5.1 at home when we haven't got anyone to play the lone striker role" another disgruntled fan wanted to know. "New Year same old frustrating Leeds" was the last comment I heard as I headed back to my seat. 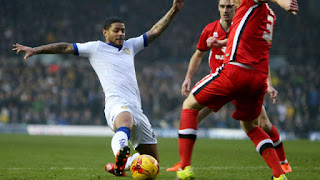 Evans had to change something and he went with the consensus in the stands and brought Antenucci on for Murphy and went to 4.4.2. I'd like to report that the move changed the game and Leeds went on to dominate the 2nd half and claim the three points but that's not exactly how the game panned out! Leeds did show a tiny bit more cohesion but with Bamba having a nightmare game at the back and the midfield unable to open up an MK team that was sitting deep the frustration just grew amongst the 24,000 fans enduring a text book excruciating Leeds United performance.

It's not that there was a lack of effort from the men in white but it just seemed everything they did was disjointed and lacking in any penetration. There was a bright spot on 55 minutes when Byram was bundled over on the edge of the box. Taylor's subsequent free quick left the MK goalie flat footed but hit the post and came out. Leeds still hadn't had a shot on target by this time........at home against a team struggling at the wrong end of the table FFS. MK continued to look dangerous on the break against the hesitant Leeds centre back pairing. Erwin replaced Doukara as Evans looked to add some much needed fire power to the Leeds attack.

The game was meandering to a win for the MK Dons with Silvestro doing his best to keep the score down to just the one goal lead. I don't think anyone in the stadium could see Leeds scoring...........and to score they had to have a shot on goal which up to the 80th minute they had failed to do. Then out of nowhere came an unlikely saviour in the shape of ex Huddersfield centre back Kay. Byram won a corner for Leeds and when the first cross was cleared Taylor swung a decent ball back into the box......"Challenge for the f****** ball" I screamed as not one Leeds player got any where near the inviting cross. Step up Mr Kay who with no challenge whatsoever managed to somehow head it past his own goalie from 12 yards when he was heading it up field. Bizarre........but it sent a huge tidal wave of relief around Elland Road. 1.1 with two minutes to go. We couldn't possibly sneak the most undeserved win since time began could we? Well we gave it a go. Well sort of.

Erwin climbed to meet a deep cross with the MK goalie but just failed to make a connection. The crowd was now urging Leeds forward but it was too little too late. MK held on for a point they would have welcomed before the game started but were now cursing their luck in how they hadn't left West Yorkshire with all three points. Such a disappointing and hugely frustrating game for Leeds which was summed up with the damning statistic that showed Leeds had managed a meagre 3 shots in the whole of the 90 minutes and none of them on target...... at home as well. Unbelievable! Thank god for Silvestri because without him we would have lost for sure.

So although our unbeaten run continues this was a huge body blow for the new found confidence at the club and highlighted just how much Wood is needed despite his failings he does lead the line well. The January window is open so presumably that will be an area to strengthen? Bamba had a shocking game and looked all at sea on more than one occasion against one of the most docile attacks in the league. Maybe it was a bloody good New Year's Eve party that was to blame for the performance? Let's hope so because with away trips to Ipswich and Sheff Wed up next in the league we will need to see a dramatic improvement if we want to hang onto our unbeaten run.

Rotherham are the next visitors to Elland Road in the 3rd Round of the FA Cup. It breaks my heart to think that the stadium will be half empty and both teams will probably play weakened teams in what used to be such an iconic competition. But that's modern Football. I quite fancy a cup run though?

Posted by Andrew Butterwick at 19:10