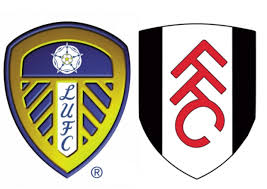 In recent years a Tuesday night game at Elland Road in February has hardly been what you would call inspiring. Usually whatever promise or anticipation that had been generated running up to Xmas had been well and truly trashed by the time the Valentines Fair arrived in LS11. Jokes about having the end of season party in the shortest month of the year have worn thin so it was with a large dose of deja vu that I hurried to the Theatre of Hope for this evening's clash with the under achieving Cottagers from West London. Fulham at home on a Saturday at 3pm struggles to get the pre match juices going so the chances of any juice squeezed out of a cold, wintry Tuesday night were about the same as the temperature......zero!

Much of the debate amongst the fans since the defeat at Watford involved the names Wootton, Berardi, Coyle along with a large helping of soul searching regarding the chronic shortage of not just goals but shots on goal so it's fair to say the hardy souls who had got to Elland Road were more than a tad interested in Steve Evans team sheet. When it came they weren't disappointed. In came Coyle, Adeyemi, Cooper and Mowatt for Wootton, Bridcutt, Bellusci and Dallas. Would the changes give a boost to Leeds poor home form? Would McCormack score against his old employers? Would Berardi get a run? Time would tell as the game got under way before a sparse crowd of just 17,000 fans.

On paper Fulham have a good squad with the likes of McCormack, Fredricks, Cairney and Dembele all possessing the quality to star in the championship but clearly whilst Fulham have the ammunition to hurt teams up front their defence is porous to say the least with an eye watering 53 goals conceded so far this term giving me just a smidgen of hope that we might improve our woeful home goal scoring record. There was no evidence of a hangover from Saturday's defeat in the opening exchanges as Leeds forced the first corner of the game with their first attack. Their early momentum was rudely interrupted though by two ex Leeds men as first Garbutt tested Silvestri with a low shot and then Bamba just got a head onto a McCormack shot to deflect it onto the bar and away for a corner.

The game was scrappy as both teams hurried passes and lost possession far too easily. It looked as if it was going to be another long night watching the once mighty whites. On 17 minutes the dark clouds hanging over Elland Road became jet black. Fulham attacked Leeds and not for the first time the defence was all at sea when the ball fell to ex Leeds academy player, Cairney, on the edge of the box who calmly volleyed the ball back past a mysteriously static Silvestri for the opening goal. 1.0 Fulham. There was almost a collective shrug of the shoulders by the Leeds crowd. Soft goals are not a surprise any more! 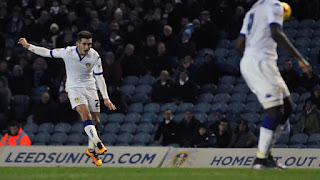 Fulham fed on the confidence the goal gave them and minutes later split the Leeds defence again but this time Garbutt mis-hit his shot straight at Silvestri. This could get embarrassing I pondered and when Bamba ballooned a shot high into the South Stand you got the feeling that Leeds season was about to collapse all around them. The only real bright spot was Lewis Coyle who had slotted into the right back slot like a veteran and for once this season we had some balance on the right hand flank. Then just as the collective home crowd had resigned themselves to another horror show at Elland Road there was a spark of sheer brilliance that came out of nowhere from a certain Mr Cook. The Leeds teenager picked up the ball in the Fulham half and ran at the retreating defence before hitting a superb shot from 35 yards that gave Lonergan absolutely no chance as the ball arrowed into the goal. What a goal and never has the saying "just what we needed" been so relevant. 1.1. Cook's goal stirred both the team and the crowd and Leeds enjoyed some pressure as the first half came to an end.

The urinal philosophers were in a slightly positive mood after Cook's goal."What a fucking strike" one fan gushed only to be shot down by a more grumpy colleague's observation "Yes but we were shite up to then" In general though there was some positivity around the old stadium but could Leeds carry it on in the 2nd half?

The game stuttered into the 2nd half with a number of stoppages not helping the flow of the game. Bamba pulled off a fantastic tackle to deny Dembele in the box as Fulham had the best of pressure up to the hour mark. Silvestri pulled off a good save to keep the scores level. Leeds only really came alive with the introduction of first Erwin for Antenucci and then Dallas for Mowatt. Erwin's physical presence upset the big Fulham centre backs and belatedly Leeds looked as if they might just muster up a few shots on goal. It was Dallas who had the best chance with almost his first touch of the game when he side footed a chance from ten yards inches past the post. Botaka came on for the last 5 minutes in place of Adeyemi as the home side looked to snatch a winner. A Taylor free kick was deflected for a corner and a Doukara header went wide but there was a sad inevitability when the ref brought the game to a close with the scores still tied at 1.1. For the record Fulham's Amorebieta made a dramatic exit in added time for a second yellow.

So Leeds continue to struggle to muster up enough fire power to win games much to the frustration of the remaining die hard fans. In truth this was a poor match with both teams guilty of giving away possession far too easily. For Leeds the old problem of disappointing final balls seems to be on permanent repeat at present. On the positive side Coyle had an excellent game at right back and was my man of the match. Cook's goal was worth all the heartache but the dwindling crowds, lack of any sort of attacking threat and general disillusionment on Planet Leeds tells it's own story.

Brighton away on Monday night next. Work commitments mean I will watch this one on the Telly.  I hope Coyle keeps his place at right back for that one. Time will tell.

MOT
Posted by Andrew Butterwick at 23:43

Hi Andrew,
Long time reader from Australia. Always the first place i go to read if i haven't made it to 01:30am to listen or watch game. Which is generally most weeks. :-) Noticed you have changed to not showing the scores in the title of report. I generally find myself squinting eyes when opening page to hopefully not read the scores before i read the report. The reason for this is because it feels like a build up and a always entertaining read to most time finding a disappointing result for us, the trials and tribulations of a leeds fan. Would enjoy if you kept it in this format. But at the end of the day it is YOUR blog and would like to send my appreciation to you for all the miles, time and effort you put into this for all us long suffering leeds fans. Keep up the great work! Heres hoping we can turn around the club over the next couple of years to its long ago former glory.

Carl,
Thanks for the comments. Really appreciate your feedback and makes my efforts worthwhile if I know exiled Whites are getting pleasure from reading my musings. The score issue is one that has come up before and I've swung both ways to be honest. I will go back to a scoreless title and see how we go.
Regards
A