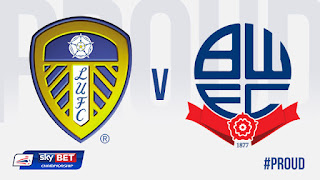 It's not unusual for Planet Leeds to be reeling from a depressive, suffocating, negative atmosphere around it's axis and this week was certainly no exception. On the pitch the woefully, shambolic defending at Brighton delivered a humiliating first 45 minutes that sent icy shivers of reality down the spines of the long suffering and remarkably loyal fans of our once famous club. The following 45 minutes did nothing to lift the spirits as we rigidly stuck to playing with just a lone striker when we were 4 goals down and managed just a solitary shot on target.


Off the pitch the chaos continued as El Presidente banned Steve Evans from talking to the press as speculation grew that a bloodied Horse's head was on it's way to the ex Boston, Crawley and Rotherham manager's bed. Bizarrely the Mad Italian's hair trigger finger wasn't used on Evans...........well for the time being. Whilst the club's accounts were published this week sending our cyberspace accountants into a frenzy the only figure that mattered to most fans were the numbers 18, the position we are in the league after yet another year of stagnation and decline, and 9 in that is the number of points we are above the relegation zone before the game. It was against this background that another club suffering their own off the field problems, Bolton Wanderers, arrived at the Theatre of Desperation and Disillusionment for this Category A clash. Unbelievable.

The cold miserable weather didn't help the mood as I scuttled down Elland Road past the anti Cellino protests and with a light aircraft circling the ground carrying a banner advising the mad Italian to leave I eventually reached the sanctuary of my seat ready for kick off. 21,000 fans had braved the weather and the despondent mood to hopefully see a turn round in the fortunes of Leeds against a struggling Bolton side. Evans made three changes from Monday night's debacle with Bellusci replacing Bamba and Carayol and Antenucci coming in for Wootton and Mowatt respectively. The opening twenty minutes didn't set many pulses racing inside Elland Road. Bellusci and Madine clashed a couple of times, Silvestri made a couple of easy saves and Carayol had a decent shot blocked. A nervous calm settled over the stadium. On 21 minutes the impressive Coyle clattered into Bolton's Spearing and lay motionless. A stretcher was needed to carry the young right back off with what looked like a serious injury. The only positive was that it gave the fiery Berardi a welcome return after his long lay off.

Leeds gradually started to apply some pressure to the fragile visitor's defence mainly inspired by Carayol's willingness to run at defenders and god forbid shoot on target! Ex Leeds keeper Rachubka palmed away a fizzing shot from the Leeds winger as the Whites looked for that all important first goal. Further attacking saw Cooper head just wide from a Charlie Taylor cross. Diagouraga started to boss the midfield area but what we needed was one of them all to rare occurrences this season, a goal. On 39 minutes my prayers were answered and from the most unlikely source............a corner! Cooper leapt high to flick on a teasing Carayol corner into the 6 yard box where Antenucci turned the ball expertly into the net. 1.0 Leeds. The goal was met with the usual roar but also a not insignificant amount of surprise from the Leeds faithful. 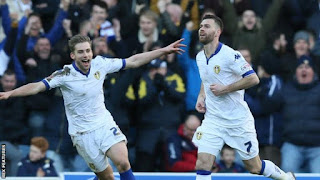 The goal shook the Bolton team and gave Leeds some impetus going forward. Taylor escaped down the left and pinged in a dangerous cross for Antenucci who so nearly doubled the lead. Half time approached with Leeds in relative control. But Leeds being Leeds they sent their fans into the half time break with a scare as Silvestri had Cooper to thank for saving his blushes as he spilled a cross in his box but thankfully the centre half's long leg diverted the ball off the line to safety. Half Time 1.0 Leeds. Leeds had responded to the defeat at Brighton in a positive manner so far but nobody was fooled into thinking we would stroll the 2nd half or this was the springboard to give Bolton a good thrashing. It wasn't and this was a very poor Bolton side.

Bamba replaced Cooper at half time after the centre half's goal line clearance appeared to have stretched a muscle too far. How would Bamba react after his nightmare game on Monday night? The club captain answered the question straight away as he made a couple of towering clearances and used his long legs to make some telling tackles. Bolton started to push for the equaliser but the Leeds defence was holding firm......well sort of firm against the division's worst away attack. What Leeds needed was a 2nd goal to settle the taut nerves of the home fans. On the hour Mirco Antenucci stepped up with with another quality finish to the delight of the home fans. Leeds broke quickly and Diagouraga split the Bolton defence to release Antenucci's but his first attempt at a cross was blocked in practice all it did was convert the cross into the perfect one two for the Italian who curled the ball sublimely past Rachubka into the net. 2.0 Leeds. Leeds could now kill the Trotters off and send them more into the relegation mire.....couldn't they?

Leeds were still enjoying a good share of the possession and certainly enough to add to their goal tally but time after time a promising break ended weakly as Leeds failed to get enough players into the opposition box to convert the chances. Chief culprit was Doukara who seems to insist on drifting wide or deep or both to get the ball and then be no where near when the ball comes into the box. With 15 minutes to go the poor Bolton side gave themselves a life line as sub Woolery pulled one back after slack marking in the build up left him like Billy No Mates on the penalty spot as he shot past Silvestri. Squeaky bum time followed as Leeds did their best to both infuriate their fans and also sit deep allowing Bolton to look for an undeserved equaliser.

Dallas replaced Carayol with ten minutes left and gave Leeds some extra legs going forward but it was at the back we were now looking vulnerable. Holding, Dobbie and Trotter all had chances to deny Leeds a much needed victory as the home side clung onto their one goal lead. 5 minutes of added time seemed like 10 but in the end Leeds held on to their 2.1 advantage.......but only just. The three points were very, very welcome especially with teams below Leeds also winning but there weren't many smiling faces as the fans headed out of the stadium. Diagouraga and Carayol had good games and Cook was like an effervescent terrier as he chased about the midfield. Antenucci was man of the match though for two quality finishes in a sea of averageness. Bolton look doomed on the evidence of this showing.

Cardiff away on Tuesday will be a much more difficult test for Steve Evans men a contest I will watch from the confines of the Norman Hunter suite and the beamback with work commitments once again preventing a long mid week trip. I'm not sure there was much evidence on show today to give any hope of joy in South Wales? Time will tell.


Posted by Andrew Butterwick at 19:56