Matchday:
Woke up this morning with a bit of PMT (Pre Match Tension)..............the best cure I've found is to keep busy so I hatched a master plan that would not only get rid of the PMT but also earn me a few brownie points with the present Mrs Marching on Together..I would decorate the spare room starting with the ceiling. So an hour later the ceiling is gleaming with it's new coat of paint, brownie points duly banked, my mind wanders to matters Football.
Today is a good day for a start Sir Alex will be choking on his porridge after last nights capitulation to Z Cars St Petersburg, not only that we're in the draw for the next round of the Carling Cup at lunchtime and this afternoon we take on the Pirates from Bristol with new found confidence after our slaughter of Palace on Tuesday, made all the sweeter by the fact that they are managed by our favourite ex blunt, Mr Warnock.
I must admit this is the bit of being a football fan that I always find amazing. In the lead up to a match football fans the world over are overcome by an overdose of optimism regarding how well their particular team are going to do in the imminent conflict. This is usually replaced by the sound of a massive thud of the individual crashing back to earth after about 5 minutes of the match when their team makes the first basic error and reality then kicks in................but today will be different!
I've just to time to watch the draw on Sky, eat your heart out Jeff Stelling Hartlepool at home will do fine , before The Happy Chocker picks me up to catch the train into Leeds. The Quiet One never made it to Skipsea so any drama in picking him up was avoided.
After making our way onto the train, passing the Hull bound express with some soon to be jubilant pie eating Wiganers on board, we settle down to discussing the possible team permutations. 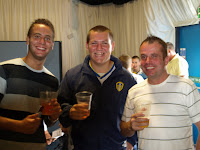 Once inside the members bar at ER and with the obligatory 2 pints and a Cornish Pasty we meet Jason (from Neighbours, Harold, Madge & Kylie are missing today) together with Denby who are fresh from celebrating their GCSE results. The Quiet One and Dad then disappear into the club shop to buy the new home shirt and I take a wander round to the kop ready for KO. 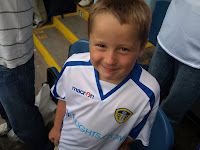 On the way a bus load of Gashead supporters emerge under police escort to be directed into the ground. Some are clearly looking for trouble and the well used "we all hate Leeds scum" is meekly sung from a few, like about four, of their Chavs.


Once inside there is an expectant buzz from a reasonable crowd of 21,000 looking to build on Tuesday's success. The line up was a surprise with Lucas in goal and Prutton, Howson, Rui, Snodgrass & Robbinson all missing from the starting line up. 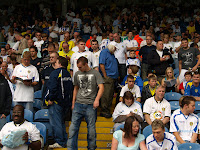 There is the usual mix of blind faith and rabid pessimism from the Kop as we kick off. For the first twenty minutes we dominate possession and run Bristol ragged and it's no surprise when Jermaine B shoots us into the lead via a deflection, the deflection costing me £10 as I had JB to score the first goal. At this stage Maccas selection gamble seemed to be working.

All was going well until The Happy Chocker decided he had to go to the gents, always a cue for a goal, and sure enough no sooner had he unzipped his fly then we conceded a soft goal. All of a sudden Leeds looked jittery at the back and before you could blink we were 2.1 down through some non existent marking by Lubo. "That's it we'll never go up with this shower" shouted a knowledgeable doom & gloom merchant sat near me...........................after all we've only got 42 games to go!

The half time whistle blew to disgruntled groans from around the ground other than the ecstatic Bristol fans in the cheese wedge. 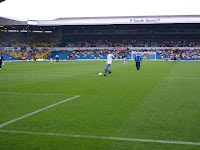 During HT we even failed with the attempted third consecutive crossbar challenge win.
I couldn't understand how we were behind after dominating possession for 95% of the half but I should know by now that supporting Leeds is never easy and surely we will pull it back in the 2nd half.
Into the 2nd half......we huffed and puffed and although we had plenty 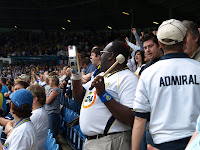 of the ball we were finding it hard to breakdown a well drilled defence and as is so often the case the frustration from the terraces seemed to get to the players. Macca then played his substitute card, taking Becchio and Hughes off to be replaced by Enoch and Howson. With Bristol trying to shore up their defence and Leeds pushing more men forward eventually the pressure told and JB grabbed a grateful equaliser................cue much relief around ER. We even then began to think we could snatch an unlikely victory..................Barry White started his unique singing accompanied by his tambourine to encourage Leeds forward!
But it was not to be and we were left still looking for our first league win at home this year.
There weren't many fans in a positive mood on the way home via the shuttle bus and finally to what became a packed train. Jason and Denby were on board slightly the worse for wear, debating whether they had enough money to make it on Tuesday against Bradford.
So another game where we never quite made the grade but for me there are enough good signs to suggest that my prediction of being in the top two by Boxing Day could still come true.
And so to Tuesday and Bradford City in the Paint Pot Trophy............it's just one glory night after another just recently!
Can't wait
MOT
Posted by Andrew Butterwick at 09:23