g off to the West Yorkshire derby with Bradford City. I listened with a wry smile as the news that "King Kev" is leaving the "bar codes" broke, I'm surprised he's lasted so long before throwing his dummy out, I have to chuckle......................... I mean is there anyone who thought he'd last until Xmas?


Back to tonight's match though...........Macca has a chance to silence the mutterings of discontent amongst some fans after our stuttering start to the season and I will not be the only one listening with interest when he announces the team........Who's going to play at centreback? Who's going to play in midfield? Will Aiden White get another chance at left back? Who'd be a manager?


Other points of interest tonight include possibly the biggest crowd for a JPT match outside the final aswell as a watch on the weather as with the sky darkening and this seasons seat leaving us exposed at the front of the kop we could be in for a wet one.


Thankfully the torrential downpour (Yorkshire's equivalent to Hurricane Gustav!) was over before we set off for the ground and we took our seats in balmy late evening sunshine. City had brought over 5000 fans so this made for a cracking atmosphere in what was a 20,000 crowd, which easily beat the previous largest JPT crowd. Macca's team selection saw starts for Enoch and Jesus up front with Robbo and Howson coming back into midfield and Rui getting the nod alongside Hunty. Young Aiden White again started at left back.


Leeds started confidently with their usual neat passing game and it's not long before we are awarded a penalty, which Robbo tucks away nicely. Not for the first time this year we have started well and are in control, The Happy Chocker even goes to the gents and there's no score. Just when it's looks like being a stress free night Bradford inexplicably get the ball in the net completely against the run of play............even more puzzling is why it was then disallowed by the linesman. Although their two wingers are causing problems for Young Aiden and Capt Chaos we continue to dominate the game and when "Our Argie" scored a terrific headed goal before half time it looked as if it was going to be another cup match with a feast of goals.


Our friend, Young Steptoe the steward, started getting more vociferous in his requests for the fans to sit down, the more Leeds poured forward. He even did a passable impression of the old 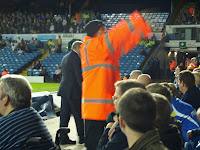 "Yeboah Yeboah" salute in an attempt to spoil the fun.

As the game reached half time there was a definite glow of warm appreciation for the whites fans as the players trotted off for their oranges. During HT the Super Leeds fan crossbar challenge was won by a young lad from Leeds with his first shot, this is the third time out of four games that Leeds have stumped up for a DAB radio...........I can see Capt Birdsye downgrading the prize if there are any more winners!

Into the 2nd half and the crackling atmosphere was ignited further with a mixture of meaty tackles (from City) and good football as Leeds went near to killing the match with shots from Robbo, Capt Chaos to name but two.................................however we have yet to learn that valuable skill of making the game safe and

all of a sudden City scored and with their tails up and their fans suddenly believing they might snatch a draw Leeds were on the rack. The defence creaked but held firm and after 3 minutes of injury time the ref finally blew his whistle on what was a thoroughly entertaining match.

As we mused over the game in the car on the way home I've decided that "watching Leeds United" will soon come with a govt health warning along with smoking, too much salt, too much fried food, as a major cause of heart attacks especially in the LS11 area of West Yorks. Even stranger was that while we were at the match King Kev apparently hasn't been sacked according to Newcastle Utd! Funny old game isn't it.

So onto Saturday and Crewe Alexandra......................more selection problems for Macca after good performances from Robbo (sponsored by Pukka Pies), Howson & Kilkenny. Also Lucas had another sound confident game..........the only thing I seem to have missed is when Casper had his bad one to get dropped?
Posted by Andrew Butterwick at 16:55