Well just excuse me while I pinch myself and check the score on Sky Sports............yes we did win 4:0 so I wasn't dreaming. What a performance from what was supposedly a weakened team......but let's start at the beginning.
Tonight was the first home game we've gone by car as we can't trust the last train especially if the match goes to extra time. Once we get parked we've just time for a quick drink in The Peacock and meet up with a few more chockers before taking our seats in the Kop. The atmosphere is good considering the size of the crowd (10,000) and the less than convincing performance on Saturday.
Macca had clearly used the game to give the periphery players a chance to show what they can do...and they did not disappoint. The young lad at left back, 16 year old Aidan White, was a revelation and thoroughly deserved his standing ovation when he was eventually substituted in the 2nd half. Kilkenny, Telfer, Lubo, Dougie all had excellent games and the man of the match was again our new hero, the Argentinian Becchio, who has added a potent threat up front whilst giving us that all important ability to hold the ball up.
We got an early goal through Dougies persistence and we were knocking the ball about for fun running the championship team ragged. We even had to wait until the 20th minute before the annoying Steward (Albert Steptoe's re-incarnation) told us to "kindly take your seats" It was all going too well. The Happy Chocker decided it was time to visit the gents, always a cue for a goal, and sure enough Mr Beckford popped up to head in the second. A standing ovation at HT as we went in 2.0 up. We'd even had time to taunt our favourite ex-blunt manager during a class first half.
The few Palace fans that had made the journey seemed to be enjoying themselves.......not sure if they were having a go at Warnock or just singing to keep themselves amused though.
The 2nd half continued as the first and soon "Our Argie" had finished off another flowing move by heading the 3rd............now it's a long time since we've seen a performance like this and I 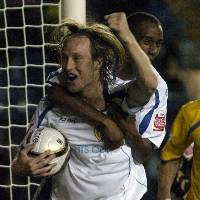 think there were still a number of fans expecting to wake up and find they'd been dreaming but nope we were definitely 3 up. Becchio disappeared to be replaced by Enoch and before too long we were 4 up with Enoch slotting home a nonchalant goal (Pinch myself again...Yep still awake)
Cue more baiting of the ex-blunt and general happiness around Elland Road.
The only negative thing regarding the performance is the headache the players have given Macca in picking the side for Saturday. So we appear to have turned into a good cup side having knocked in 9 goals in two games and with Bradford due next Tuesday it's highly likely we will add to that total.
So the inevitable debate on the way home was who will we get in next round...Southampton away? Scum away....no keep them for the final.....Newcastle would be good or even Derby but there's one thing for sure I don't think anyone is going to relish been drawn against the mighty whites whoever they are.
Roll on Saturday when the free scoring Gasheads from Bristol come to town let's hope we can continue where we left off tonight.
MOT.
Posted by Andrew Butterwick at 22:52

A brilliant read for those of us who can't travel like we used to! Keep up the good work bud, and cheers for the mention.