Its 4.30am and the alarm is ringing away. It's at times like this that even a loyal Leeds fan questions why do I do it? It's always the same answer though..........because they're worth it!

After hastily packing up sufficient provisions to last until at least lunchtime and waking the present Mrs Marching on Together (she's has kindly volunteered to act as taxi driver to York station) we are off to pick up The Happy Chocker and The Quiet One and onwards to Yeovil.

As we board the relatively empty train we notice a group of card playing cider drinking Sunderland fans (at 6am!). They are far too engrossed in the game to engage in early morning banter though. The first leg of the journey is from York to Kings Cross and the 2 hour journey flies by with the help of a couple of breakfast sandwiches of sausage & tomatoes.

It does give time to reflect on the match though. I think it's safe enough to say that confidence was not high after last weeks capitulation to our friends form Oldham. The Quiet One raises the spirits by confidently predicting a 2.0 win. 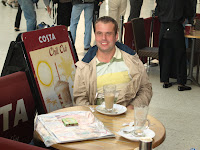 After arriving at Kings X and transiting across London to Waterloo ready for the second leg to Yeovil Junction we find ourselves sat in a coffee shop (Happy Chocker in the pic) near the famous Waterloo clock killing time until our departure. All of a sudden we seem to be outnumbered on the platform by Exeter City fans on their way to Bournmouth. Now I know we have fallen from grace in recent years but ffs....................


On the train to Yeovil Junction we meet what I would call a true Football fan. He supports Grays Athletic, never mind where's Yeovil does anyone actually know where Grays is? Well I do now......it's just off the A13 near Romford in Essex. Our new found friend entertains us for the next hour before departing at Salisbury with his tales of Grays and Football in general. "Those Chelsea/Manure/Arsenal fans are not true fans cos they never go to a match" You won't see them getting up at 4.30am to travel half the length of the country to watch their team" You get the general idea. 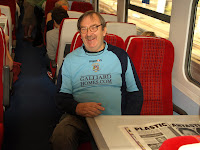 He clearly is a keen fan.......keeping scrap books on the history of football clubs (just completed Man U and is considering doing one on Leeds) but the most amazing bout of loyalty was his intention to travel to Torquay in midweek to do a reckie for his fellow Grays fans for the forthcoming match at Plainmoor just so they would know which bus/train/taxi route was needed to get there on time! Seeing that they only took 32 fans to York City last year I hope his mates buy him a pint for his efforts.


On the train were a good smattering of Leeds fans and after passing through a veritable cocktail of southern towns we arrive at Yeovil Junction. Now to say that Yeovil Junction is in the middle of nowhere is the biggest understatement since Buzz Aldrin uttered those famous words "Houston we got a problem" 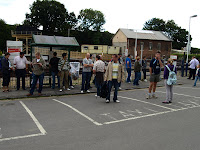 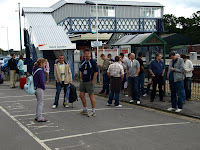 It felt as if we were either on the set of Life on Mars (bit like following Leeds) or an Agatha Christie novel "The 9.20 to Yeovil Junction" Although there was a bus stop at the station the prospects for getting to the match on time were now dwindling even though there was still 90 minutes to go. As you can see from the photos we now knew "Where's Yeovil?"
Eventaully a bus turns up to take us into the town centre where we then had to catch another bus to the ground. After a frantic time trying to find when the next bus was due we finally got on a hopper bus bound for the football ground................. after two detours to drop of a woman he had forgetton to drop at the bus station and the distraction of a woman with a small dog in a push chair getting on to travel two stops, clearly the dog was tired, we arrived at the ground with 15 minutes to go to kick off. Bizarrely we spotted "Grandad Chav" walking the opposite way out of the town centre en route, proudly sporting his LUFC flag around his shoulders again. 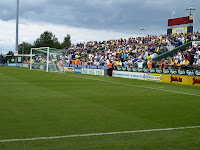 We were in the Cowling stand adjacent to the main body of Leeds fans behind the goals. as with all roofless terraces some of the noise and atmosphere was lost to the sunny Somerset sky but our small band of fans were able to make enough noise in the Cowling stand to ensure puzzled looks from the Yeovil fans in the nearby seats.

The Yeovil mascot, The Jolly Green Giant tried to "connect" 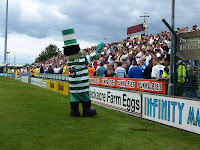 with the Leeds fans, bless him, as Kick off approached but I think he got the message and quietly retreated.


So after 7 hours of travelling we ready for the start and in the blink of an eye the wonderfully named Lucciano Becchio had turned his defender and placed the ball in the bottom corner to give Leeds the best possible start, cue much celebrating from the travel weary Leeds fans. Leeds controlled the first half from that point without ever really looking like adding to their 1.0 lead. The ref did nothing to endear himself to Leeds by his constant whistling and fussy style. Even worse when Fraser was hurt with a late and deliberate lunge from a Yeovil player he decided not to book the offending player. As the game went on he went from bad to worse.


So to the 2nd half and again we seemed to be in the box seat until the man in black gave Yeovil a penalty. Now not having the benefit of a TV replay or bionic eyes I cannot say if it was or not............but by the lack of reaction from the majority of the crowd and no appeal from the Yeovil players I can only assume it was dubious at the very least. Inevitably their striker stepped up and knocked home the rebound after an excellent save from Casper. 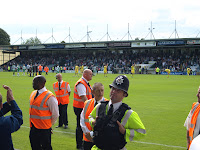 Yeovil with their tales now up looked threatening and could have added to the misery but a lack of finishing and some last ditch tackles prevented Leeds going behind. Macca subbed Robbo, Howson and Snoddy bringing on Dougie, Enoch and Delph. This steadied the ship, especially Dougie's influence, and Leeds ended the game on the ascendancy but still had to be content with a draw.

The positives from the game for me were good performances from Rui & Hunts at the back and Becchio up front, Howson had a better game in midfield and as ever Jesus run his saintly legs off. Robinson was again disappointing but let's bear with him until he settles in, and Beckford flitted in and out of the game looking dangerous when he was in but petulant when he wasn't. In the end I think a draw was probably a fair result.

So whilst a bit cheesed off that we haven't the season like a house on fire, as we did last year, I'm still confident we will progress and come Boxing day will be in the top two.

So now we had the problem of finding our way back to Yeovil Junction and the journey back to civilisation and the 21st century. We picked a taxi up after much haggling and shared it with a fan from South London. Despite a bit of queuing traffic (Never seen anything like it according to the taxi driver!) we made the 4.20 for Waterloo.

We shared a good healthy debate with "The Wakefield Warriors" on the train regarding the match and all things Leeds and by the time we arrived at Waterloo, ably helped by the odd can of Stella and Carling, we were all in agreement that managing a Football team was easy and given the chance to give up our day jobs and takeover the reins we would excel. Don't get me wrong nobody was calling for Macca's head it was just that post match blend of disappointment in not winning, frustration and.............yes alcohol.

Once in Waterloo, after passing the most ludicrously dressed cyclist I've ever seen, we caught the tube back to Kings X and the train back up t'north. 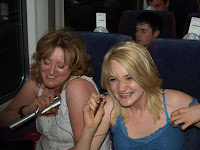 The journey was largely uneventful apart from sporadic renditions of Abba songs from the many girlies on board (In town to see Mama Mia). With the previously mentioned cans kicking in we struck up a conversation with 3 such girlies (aged from early twenties through to 60) from Nottingham. After pointing out to the middle one that singing into a hairbrush her version of Dancing Queen whilst listening on her iPod wouldn't qualify her for the next version of X factor our initial positive inroads seemed to drift away..........come to think of it a bit like the match then ! We wiled away the remaining hour of the journey testing each other on nicknames, team colours and grounds of Football League clubs......The Quiet One kept awake all the way home not bad for an eight year old after a 17 hour day, he enjoys the away games more than the home ones I think......I just contemplating when to let him into a little secret....the first 50 years are the worst!
The present Mrs Marching on Together was dutifully waiting at the station when we arrived and we were all home for 10pm.
4 home games now to look forward to staring on Tuesday.....can't wait.
MOT
Posted by Andrew Butterwick at 08:56