After negotiating the worst the M1 and M25 could throw at us in terms of roadworks and accidents the Happy Chocker and I arrived slightly travel weary in sunny Brighton ready for our Friday night clash with the Seagulls. Our weariness was soon forgotten as the first pint of pre match refreshment was sunk at the aptly named Queens Head in the centre of Brighton.  We were joined by a healthy number of the Twitterwhites glitterati together with an eclectic mix of home fans and the some what perplexed members of the local bohemian set who were none too pleased to have their Friday afternoon watering hole invaded by rather loud Footy fans. 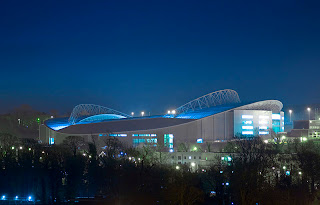 An air of expectation built steadily as the local ales flowed freely.  The locals were confident of victory in their brand new shiny stadium whilst the Leeds fans were slightly more circumspect being acutely aware of how porous our defensive line can be under pressure and with the excellent Mackail-Smith in the home forward line the prospect of a first clean sheet for Leeds looked...............well pretty unlikely.  We said farewell to the Queens Head and made our way to the chaotic train station for the short ride to the new Amex stadium. Even though Brighton have shelled out a staggering £102m on their new home you do expect some teething troubles in the first few games.  Clearly the idea of encouraging fans to make their way to and from the stadium on public transport or bike is a laudable concept but it might help if they provided sufficient trains and buses to cope with a sell out crowd?  Or maybe they expected more fans to go by bike?  Anyhow after squeezing onto the train and having some excellent pre match banter with the home fans on the 10 minute journey ("There's only one Gordon Smith" "Are you Galpharm in disguise" and other songs) we arrived at the mightily impressive Amex Stadium.  This was definitely not The Withdean!

The team news was interesting.  Becchio was on the bench with Keogh starting and Bromby was preferred instead of Kissy.  Not many fans predicted that one.  Danny Pugh made his debut on the left flank.  Inside the stadium the mixture of the well designed acoustics, the enthusiastic home fans and an over subscribed session of pre match refreshment for the away fans combined to create a deafening symphony of pure football atmosphere as the game kicked off.  Both sides sort to gain the early upper hand as the home side's Poyet inspired passing style was matched with a high tempo pressing game by the eager Leeds team.  Ashley Barnes went near from a corner for Brighton.  The ironic cheers from the Leeds fans hid a huge sigh of relief as the ball sailed over the bar.  Leeds were looking confident though as Snoddy combined well with White, Clayton and Howson to time and again push Brighton onto the backfoot.  The openness of the game left Leeds vulnerable at the back though but the new back four combination seemed to be coping for the time being.  Then Leeds' enterprise paid off.  Pugh, who started full of energy, exchanged passes with White to tee Ross Mac up on the edge of the box........................his shot was blocked and the ball rolled tantalisingly to Andy Keogh who calmly slotted it home to give Leeds a 1.0 lead.  Get in you beauty!  The 2,200 travelling army erupted in celebration.  We were so nearly brought straight down to earth though as Mackail-Smith wriggled free in the box and played a stinging cross right in front of an outstretched Brighton boot but thankfully the ball went untouched and away to safety. 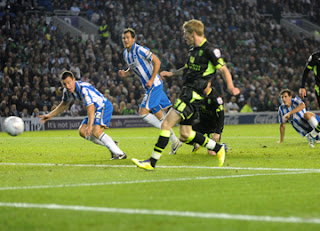 Five minutes later we were in dreamland.  The hard working Keogh, inspired by his first goal for Leeds, chased a hopeful pass into the corner and retrieved the ball before feeding Snoddy.................the Scot looked up and fed Ross Mac who swivelled and fired the ball past Ankergren into the net.  2.0 Leeds.  Bedlam ensued in the away end as the home fans quietly sobbed into their soft tissue hankies. With over 65 minutes to go the game wasn't over but Leeds had taken a giant step forward to securing their first away win of the season.  All we needed now was that illusive clean sheet? For the rest of the half Leeds turned the screw and took control of the game with some confident possession play coupled with incisive attacks that worried the home defense. The only threat the Seagulls made up to half time ended in a pathetic shout for a penalty as Lonergan thwarted a through ball into the box.  Leeds went in 2.0 up and in control.  What could possibly go wrong now?  "Knowing our luck a piece of that NASA satellite will drop on the pitch just as we look like keeping a clean sheet" I forecast to the Happy Chocker.

The Leeds team that trouped off at half time with heads held high and a standing ovation from their devoted fans ringing in their ears didn't reappear for the 2nd half.  Instead they were replaced by a hesitant and indecisive Leeds team who were caught out within two minutes of the restart.  Mackail-Smith lost his marker Bromby, well not so much lost him as wondered away from him, and stroked a sublime shot past Lonergan.  The home fans celebrated with gay abandon whilst the Leeds hordes all had the same thought.  Why, why, why can't we keep a fucking clean sheet...........ever!  Suddenly the robust two goal lead had changed to a wafer thin one goal lead.  At this rate we could be hoping that piece of satellite does fall on the pitch after all.

The next 40 minutes of the game were like torture as Brighton over ran the self same Leeds team that had crucified them in the first half. Bromby brought down Mackail-smith to give them a penalty.  Lonergan couldn't repeat his penalty save of last week and Brighton equalised.  It was the home fans who were raising the roof now as I gazed hopefully skywards for a sign of the satellite plummeting to earth.  Leeds battled hard but couldn't stop the Seagull's waves of attacks and finally conceded a third fatal goal with just 4 paltry minutes to go.  Bummer!  Only Leeds could give up a two goal lead so easily and yet despite this cruel fact I still suggested to HC that we could nick a goal back.  I caught his eyes as they rolled out of the top of his head.  But for a 2nd week running God proved he is a Leeds fan as Jonny Howson contrived to pick out Ross Mac with almost the last kick of the game and our new goal scoring hero took his seasons league tally to 8 in 8 games as he slotted the ball past Casper in the Brighton goal.  Unexpected goals are always the best...................and this was one of the best of the best.  There was carnage behind the goals as the travelling support literally jumped for joy.  3.3.  The final whistle blew accompanied by a chorus of the Ross Mac song closely followed by a rousing rendition of MOT.  Life was good in West Sussex for all Leeds fans.

Clayton, Keogh, Ross Mac, White and Howson were the key performers for Leeds with all the usual worries regarding the defence continuing.  Danny Pugh had an encouraging debut before being substituted.  Still a point is a good return from a visit to Brighton.  The journey back to Brighton centre was hampered by a distinct lack of sufficient trains to transport fans back to civilisation.  It did give the queuing fans at the station time to exchange pleasantries though!  I do wonder if the home team have fully explored the reasoning behind calling themselves the Seagulls and squawking their nickname in the one word song Seeeeeeeeeeeagullllllllllls!  After all a seagull is a scavenging bird that does nothing else but shit over everything it comes in contact with!  Hardly an inspiring reputation to base your team on?

Leeds' never say die spirit saved the day again as a late goal rescued the game for the mighty whites for the 4th time this season.  Sad fact is until we banish the curse of the "no clean sheet" syndrome we won't be able to challenge for the play off's. The long drive home give me plenty of time to consider this and I came back to a conclusion I had last season.  We can change the personnel in the back four and we defend no better or worse.  It's not the individuals it's the defensive coaching and set up that's at fault and until that boil is lanced by Lord Larry we will continue to need to score 3 goals a game just to survive.

Two easier games, dare I say, coming up though in the shape of Pompey at home and then Donny away.Good possibility of 6 points me thinks?
Can't wait!
MOT


Posted by Andrew Butterwick at 16:03