Friday night is never an ideal time to watch Football.  All the stress and worry of your normal working week is still all too vivid in your memory but as the mighty whites had a TV date with Donny the Dog at the time Corrie was having it's first ad break my faithful Scirroco was hurtling towards the Keepmoat Stadium to hook up with the Happy Chocker, the Quiet One and Justin the beer monster. I was quietly confident.  After all Leeds had kept a clean sheet last time out and scored from a corner something they hadn't done for a millenium.  How difficult could a game against Doncaster "town full of Leeds fans" Rovers be even if they had picked up a bit of form since Dean Saunders' arrival at the mighty Dons?

My confidence was matched by HC and Justin as we quaffed a well earned pre match drink.  Bets of 3.1 and 3.2 were laid by my companions. "Nope I fancy another clean sheet" I argued to much rolling of eyes by my unfaithful compatriots!.  Mmmm? The team news was that there wasn't any team news as Lord Larry stuck with his starting eleven from the Pompey game.  The back four of White, O'Dea, Lees and Connolly looked solid enough for me...................even with a bit of a dodgy right back.

The game kicked off on a fresh bracing South Yorks evening.  South Yorkshire's finest had Naylor playing a sweeping role and big, and I mean big, Jon Parkin playing as a target man.  I'm sure I wasn't the only Leeds fan amongst the 4,200 travelling army who felt a shiver go down their spine with memories of a certain game against PNE in which Big Jon gorged himself on some woeful Leeds defending. Still with O'Dea and Lees at the back he'll not get a sniff this time I nervously told myself.  The first 15 minutes were frenetic in keeping with your normal local derby.  As the tackles flew in Leeds started to get the upper hand and press the men in red and white hoops.  A neat move down the right and some intelligent running by the ever improving Keogh sprung the home defence..........................his ball zipped across the box as Ross Mac tried an audacious flick towards the goal only to be clattered from behind by the Donny defender.  Penalty! I screamed from a good 60 yards away.  Th referee, Kevin Friend, turned down my appeals and gave a goal kick.  It was about this time the rather drunken fan to my right began to test my nerves.  Everybody in a blue shirt was either Shite or a greedy bastard and as for Snoddy "he only fucking plays when he's got a Scotland shirt on" he slurred. As he was a good twenty years older than me I put it down to senile dementure brought on by 60 years of watching Leeds United.

Contrary to Mr "everybody's shite" view Leeds were playing the better football and taking control. All of a sudden the worries of the week were far, far away.  Maybe Friday night football isn't too bad after all?  It was about to get a lot,lot better.  Leeds won a free kick near the corner flag with some adventurous attacking play.  I suddenly had a crystal ball moment. "1.0 guaranteed" I muttered to HC.  Snoddy swung the same cross in as he did against Pompey and Pugh did exactly the same as he did against Pompey only this time with a sweet volley past the hapless Kirkland in the home goal.  The Leeds hordes celebrated with delight.  Danny Pugh wasn't trumpeted as a key signing by many fans when he arrived from Stoke but he has certainly added a different quality to the team.  Could turn out to be one of Lord Larry's more astute signings?

Leeds now ripped into the flailing Donny team.  Keogh swept a shot just past the post.  Ross Mac hammered a free kick just too near Kirkland.  Clayton started to purr in midfield ably supported by Capt Fantastic Howson.  Mr "everbody's shite" still wasn't happy but Leeds' confidence on the ball grew visibly as the started to put Donny to the sword.  But this was Leeds I was watching and just to keep us on our toes Big Jon was allowed a free header at the back post from a rare Rovers attack.  He should have equalised.  Half time came with Leeds leading at a canter 1.0.

During the interval I swapped notes with Big Steve on the first 45 minutes and relayed my experience with Mr "everybody's shite".  "Oh you must mean my cousin, Rolly!  He's always drunk and he's never satisfied" When I pointed him out sure enough it was Rolly! The Happy Chocker was more than pleased with the first half and his bet was still live.  I did point out that in the last Friday night game we were 2.0 up at HT and sort of lost our way a bit.  He wasn't amused.

At 1.0 team's are always vulnerable so a solid start to the 2nd half by Leeds was needed and that's just what we got.  Yes Donny spluttered a bit and Leeds' Mr Reliable, Andy Lonergan, had to come and claim a cross and then a weak shot but it was Leeds who were very much on the front foot attacking their adoring fans.  Snoddy gathered the ball on the right and jinked into the box before shooting too near Kirkland.  "Greedy Bastard" Rolly snarled for the umpteenth time.  Leeds' superiority was too much for Donny though. Neat passing and midfield play orchestrated by Howson and Clayton stretched the creaking home defence.  A quick pass to Keogh who's first time clip found Ross Mac goal side of his defender but his first touch wasn't the best.....................his second was delicious though as he adjusted his body and hit an unstoppable overhead kick past the hapless Kirkland. 2.0 Leeds and game over, yes I know Big Jon could still score four but Leeds were now in cruise control. 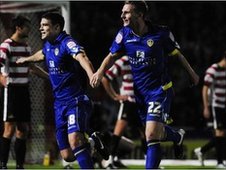 Keogh and Ross Mac were running the Donny back line ragged.  If the impressive Friend (the player) hadn't been at the heart of the home defence Leeds could have had double figures.  Leeds were attacking from all areas of the pitch.  Aidey White was linking magnificently with Pugh and raiding the left.  Snoddy was teasing Illunga on the right and Clayts and Howson were all over the home midfield like a rash.  The third goal was inevitable as Lees obliged from a corner with a firm header past the still hapless Kirkland.  The Leeds fans danced with delight as the Keepmoat started to lose a significant number of home fans who headed for the drawbridge with still 15 minutes to go.  Leeds were now playing exhibition football as they blasted a warning to the rest of the division.................live on Sky!  The only blot on the evening was the departure of Lonergan with a finger injury on 77 minutes.  Keogh so nearly rounded off his best game for Leeds yet with a goal as he broke free and smashed the ball against the bar.

By the time the final whistle blew there were only a handful of the "Donny til I die" brigade left in the ground to see the Leeds fans celebrate picking up their 13th point out of the last 15 available.  Promotion form?  So another clean sheet and another goal from a corner.  A satisfying night for the all Leeds fans, even Rolly in the end.  Lees was outstanding with O'Dea at the back.  White enhanced his growing reputation as one of the best young left backs in the country whilst Danny Pugh gave another impressive quality display.  Keogh and Ross Mac were peerless up front supported by a commanding midfield of Howson and Clayton.  Leeds are definitely on a roll.

Maybe Friday night is a good time to watch football after all?  More displays like this and I could be persuaded I thought as we streamed away from the ground.  I smiled as Justin regretted his decision to buy another pint just as Ross Mac hit the goal of the season. I wasn't the only one smiling though as over 4,000 Leeds fans dispersed into the night with broad grins fastened to their faces.  Don't you just love football?  Well unless your name's Mr LeedsLass that is!

Coventry next on Tuesday night and a chance to extend our unbeaten run.  On this form there should be more broad grins after that one even on Rolly's gnarled face!
Can't wait!
MOT


Posted by Andrew Butterwick at 00:37