Even though it was the 1st day of October Mr Sunshine was cracking the pavements in Selby as I cycled to the station to catch the train to Leeds for our clash with Pompey.  Yes I did say cycle. The Happy Chocker was running behind time so I hijacked Mrs MOT's bike to ensure I didn't miss the train.  Shorts, flip flops, vests, replica shirts and T shirts were the unusual October fashion attire for the assembled mighty whites fans on the packed train.  Much discussion on the likelihood of a much needed clean sheet filled the 30 minute journey to Leeds station.  I was having an extra uber optimistic day  as I confidently predicted that not only would we get a clean sheet but we would also score from a corner.  Leeds have done neither of these this century but I didn't expect the vilification I received from both cyberspace and the train carriage at such a suggestion. I think most people thought I had finally lost the plot.  Someone even suggested there was more chance of Shergar winning the Prix de L'Arc de Triomphe.  (You know who you are!)

The Theatre of Hope was swathed in sweltering sunshine as we took our seats for the kick off.  Lord Larry had dropped Bromby from last week's draw at Brighton and replaced him with Connolly, moving Lees to centre back. Mmmm " Like moving Lees to centre back but not so sure about Connolly" I commented to HC.  Kisnorbo wasn't even on the bench due to a mystery illness.  The Quiet One was demolishing a foot long Subway as the game got under way. 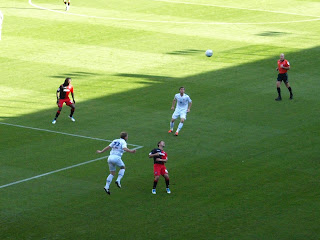 Leeds were firing towards the South Stand, now exclusively reserved for Leeds fans, and started the game with some slick attacking football.  Snoddy was much sharper than of late.  His trade mark jinking runs were already  bamboozling the Pompey left back and the game wasn't ten minutes old.  Leeds were looking hot and began to turn the screw..............Snoddy slithered into the box like a cobra waiting to strike the .unfortunate full back......he lured him into a fateful tackle and then danced by him to the bye line before pulling the ball back into the path of Ross Mac.......Get innnnnnnnnnn I screamed as the ball was deflected away for a corner at the last minute.  Snoddy's corner was scrambled away by Pompey.  The pressure was on Pompey though and they were looking frail at the back.  Snoddy lined up another corner.  This time it was a thing of beauty as the ball sailed into the danger area where it was met by Danny Pugh who planted it firmly in the onion bag.  1.0 Leeds and it was from a corner! All I could visualise was Kammy's excited report back to the Sky Sports studio....................."Unbelievable Jeff, Leeds have scored from a corner" 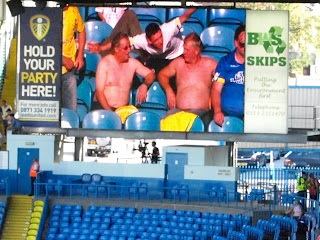 With one goal in the bag and the defence looking solid under the new partnership of O'Dea and Lees the mighty whites went for the jugular.  Snoddy broke quickly down the left and again left the full back for dead before drilling a shot inches wide of the far post. Soon after Leeds again broke quickly from their own half with Snoddy loping towards the half way before releasing Howson.  Capt Fantastic turned on his afterburner and surged through the flailing Pompey midfield before picking out Pugh whose shot deflected wide for a corner.  This was serious stuff from Leeds.  Pompey did show their aerial threat though as the giant Halford met a corner with a thundering header that the magnificent Lonergan just tipped away only for the ball to be slung back into the middle for Halford to hit the bar.  Our pristine clean sheet was so nearly soiled.

Clayton was strutting his classy skills in midfield with able support from Howson whilst Pugh added much needed rigidity to the Leeds left flank.  The only blot on the landscape was Paul Connolly who seemed to be struggling with lack of match practice.  He gave a way a free kick 25 yards out as we neared half time.  Lonergan did well to parry the thunderous shot away and the whites went into the break with a well deserved standing ovation from another poor crowd of just 22,000.  But they got a standing ovation at Brighton after the first 45 minutes?  Surely this time they would kill the game off and not let Pompey back into the match? 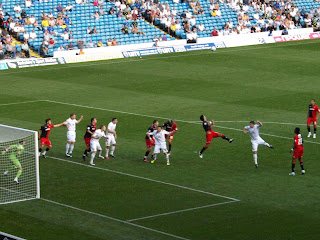 Well not exactly.  Kanu came on for the visitors and immediately Pompey looked a different team as they bossed the first 15 minutes of the half.  "I've seen the trailer" HC ominously opined.  Mmmm I had to agree Leeds were hanging onto their lead nervously.  It was as if they had suddenly realised they had a chance to get the "clean sheet" monkey off their back and they had all started to freeze.  Possession was given up too easily.............Kanu was making a nuisance of himself and in doing so fraying my nerves along with 21,500 other Leeds fans.  The game had a familiar ring to it, Leeds go in front and boss the game then get the jitters and start to panic.  As the half wore on Leeds continued to battle and throw bodies at the ball.  Lees was having a commanding game at the back as was O'Dea.  Aidey White was solid and like lightening when he attacked.  Gradually as the clock ticked slowly towards 90 minutes the crowd fell into a silent, nervous, gut wrenching state as Pompey threw everything at the Leeds defence.  Becchio came on for Keogh with 22 minutes to go.  This was now definitely not a game for the neutral as any quality in the game had long disappeared and been replaced by a "dogs of war" mentality on both sides.  With 12 minutes to go the two Finnish internationals, Forrsell and the other one nobody knows how to pronounce, came on to add fresh legs to the Leeds effort.  Forssell tried to turn a swift cross goalwards but to no avail.  The game entered the last 10 minutes with Leeds still withstanding the Pompey onslaught.  3 minutes added time were announced and I'm not sure my nerves will last.  We get a corner as the 90 minutes are past.  Inexplicably O'Dea thinks this is a good time to try and score a goal whilst three eager Pompey strikers wait in anticipation on the half way line.  "Get back you silly bastard" I suggested to him from 45 yards away.   Pompey's last hurrah were two long throws that somehow were repelled by the exhausted Leeds back line before the ref blew his whistle.  What a beautiful sound.  "You're not going to believe this Jeff but Leeds have kept a clean sheet and scored from a corner all in one match, unbelievable Jeff" Kammy reported. 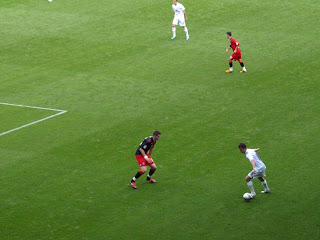 As the crowds streamed away in the glorious sunshine much was made of the first clean sheet in a million years.  Clearly Tom Lees had staked a very firm claim for a permanent spot at centre back after today's performance and O'Dea looked solid alongside him despite his wanderlust near the end of the game.  It was good to see Snoddy back to somewhere near his best aswell. My MOM would go to Clayton though for another accomplished showing in the centre of Leeds midfield.  The journey home in the sweltering heat was a good one.  We are now handily placed in 10th with a game in hand and we've finally got the monkey's of the clean sheet and scoring from a corner off our backs. Things are looking up.  Now what are the odds for Shergar to win the Arc?

Donny at the Keepmoat next just when they seem to be hitting some form.  Should be another cracker and hopefully another clean sheet?
Can't wait!
MOT

Posted by Andrew Butterwick at 20:24