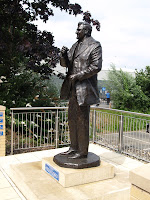 So another tantalising season beckons for the Leeds United faithful. A first round Capital One Cup tie against the mighty Shrews was the first hurdle of a long season that Leeds had to negotiate and like Saturday follows Friday the Happy Chocker, Quiet One and yours truly were treading that well worn path from Selby to the Theatre of Hope.  All the familiar sights, sounds and smells were soon registering with our match day sensors.  The wasps nest in Selby station was still there, the shuttle buses were standing obediently in line waiting to transport us from the station to the ground and the inevitable smell of fried onions and dodgy burgers wafted into our nostrils as we headed for the members bar.  Yes another campaign had begun.

News that El Hadj Diouf had signed a match by match contract and would be sat on the bench shocked more than a few Leeds fans.  The player that Warnock described as a "Sewer Rat" after the post match bust up last season and who Ross Mac crossed off his Xmas card list for the same incident was now wearing the famous white shirt of Leeds. Diouf who is famous for not only his prowess at saliva projectile launching but also causing havoc in nightclubs and generally pissing off the majority of his employers was not universally welcomed to the "Dirty Leeds" fold by the Leeds fans. Despite that "Spit the Dog" had a smile on his face as he warmed up in his new No 21 Leeds shirt.  At least his signing shuffled the takeover Hokey Kokey down the pecking order of discussion topics before the match.  Life is never dull when you follow Leeds! 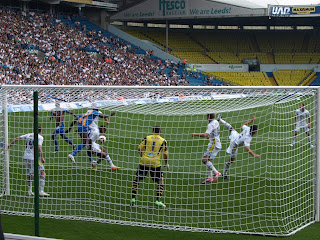 NW had selected what he said would be his strongest team, Sniffer Kenny, Young Sam Byram at full back with Pearce and Pelts at centre back and Aidey White at Left back. The centre midfielders were captain Norris and the Beast Austin with Green and Varney out wide.  Ross Mac tucked in behind Becchio up front. An injury to Tom Lees had sidelined him whilst young Poleon and Kissy joined Spit the Dog on the bench.  The atmosphere inside the ground was expectant with a crowd of 18,000 supplemented by a healthy contingent up from Shropshire.  With our usual location in the Capt's lounge closed we sat in the Kop as the game kicked off in cloudy but warm conditions.

If Neil Warnock's side thought playing a League One side would be easy then they were in for short, sharp shock as it was the Shrews who did all the early pressing forcing Paddy Kenny into two early saves in front of the kop.  Leeds initially looked rattled and dug deep to repel the upstarts from the League below.  Norris in midfield and Pearce at the back led the way with some robust defending but it was the visitors who were knocking the ball about with confidence not the mighty whites. Then on twenty minutes the Bionic man Austin   pounced on a loose ball and drifted towards the goal before unleashing a stinging drive from 25 yards that the Shrews goalie could only parry towards the man who cost less than Berbatov who calmly slotted home the opening goal.  Leeds 1.0 Shrews.  The large visiting contingent of fans could feel rightly aggrieved having had the better of the opening exchanges only to find themselves behind to Leeds' first real assault on goal.

The goal lifted Leeds and six minutes later the lead was doubled as a move that was started by Kenny flowed down the right before an attempted pass from Varney rebounded to Ross Mac in the box who then squared for "Reg" to tap in off his shin. 2.0 Leeds.  The Shrews fans were not a happy bunch.  Not only were they two goals behind in a match they were more than holding their own in the referee was being extremely kind to the home team.  The 2nd goal gave Leeds more confidence and the ball seemed to move sweeter between the white shirts.  A Varney cross sizzled onto Becchio's head and the ball whizzed inches over the bar.  Ross Mac was causing the visitors defence problems whilst in midfield Austin & Norris were beginning to get a grip.  As the game approached half time Norris found some space but ballooned his shot over the bar.  The referee's whistle brought to an end an entertaining half.  Leeds were slightly fortunate to be two goals ahead but words like encouraging and promising were the order of the day in the half time urinal debate................quickly followed by an opinion on Spit the Dog! 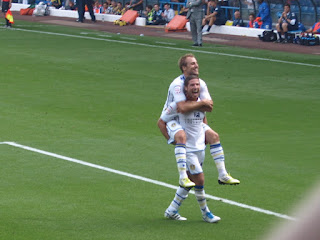 The visitors were out on the pitch a long time before Norris led out the home side.  The pattern of the game continued with Leeds showing touches of superiority without shaking off their tenacious visitors.  Pelts and Pearce looked solid at the back though with some well timed last ditch tackles bringing gasps of delight from the nervy Leeds fans.  At full back Byram was looking promising with some surging runs forward.  He so nearly created a goal as he linked with Ross Mac before whipping over a vicious cross that first Becchio then Reg Varney so nearly converted.  On the hour Leeds' increased pressure finally told as Norris fired what looked like a tame shot past the visiting goalie to give Leeds a three goal cushion.  The Shrews had finally been tamed. 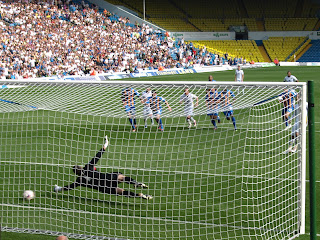 More was to come as Leeds' swift counter attacks opened up gaps in the Shrews defence and on seventy minutes Leeds were awarded a penalty for handball..........more protests from the visitors.  Ross Mac calmly stepped up and slotted the ball home.  His celebration gesture to the kop suggested he wanted to sign a new contract............interesting?  At 4.0 the Shrews were now well and truly tamed as tame can be.  The excitement wasn't over though as 4 minutes later Warnock made his final subs.........enter Spit the Dog and Poleon for Ross Mac and Paul Green.  Green had had a quiet game and was probably the least impressive of the new guys? Now were they boo's or were they cries of Diouf Diouf ringing round Elland road?  I think a bit of both.  Not good.  In my book you don't boo your own player before he's even kicked a ball no matter what he's done.  If he's good enough for Warnock who thought he was a sewer rat last year then he should be acceptable to the fans.

So how did Spit play.  He's not a grafter but he made one or two delightful touches during his brief cameo as did Poleon. I suspect Spit's tenure at Elland Road won't be that long but I bet he gives high entertainment value while he's here. 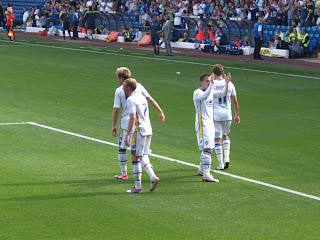 The game finished 4.0 .  Ross Mac and Spit headed for the tunnel together but in a slightly better mood than the last time they trod that path! The Leeds fans went home happy after all the Capital One Cup is one of two possible routes into Europe for next season!

Pearce, Pelts, Byram & Varney all had good games with Norris and the Beast showing excellent steel and guile in midfield. Up front Becchio looked slimmer and fitter than I've seen him for a while whilst Ross Mac showed just why he needs to sign a new contract.  A good start to what could be a promising season? The journey home was filled with chatter about details of the forthcoming away games...........always a good sign that Leeds fans are happy.  Wolves up next in the League opener.  Another clean sheet should secure victory me thinks.

Posted by Andrew Butterwick at 22:56