Thoughts for the Weekend

It seems an absolute age since we were heading home from Essex and the goalless draw with the Shrimpers. At that time we were sitting proudly atop League 1 but Charlton's result on Saturday meant that was a short stay at the summit but that's not too big a jolt as nobody has ever won a league title by being at the top in September! It tends to be who's in pole position in the merry month of May. Looking forward though our fixture list in October is looking more and more important with games against Charlton, Millwall, Bristol Rovers, Norwich & Yeovil............clearly this has not been lost on Larry who is already calling it the "Month of Death" 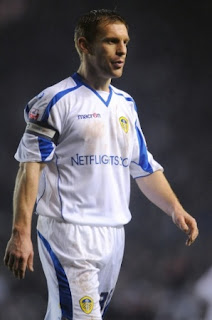 Injuries and selection issues will be testing Mr Grayson's grey cells as Rui is out with an Achilles problem but Bam Bam is available again to push for one of the centre back berths. Add to that the possibility that Jason Crowe may not be fit and the permutations for the back 4 positions start to increase. The positive thing is this year we seem to be solid with almost any combination of defenders whilst last year it was definitely the other way round.
The rest of the team should pick itself with the Italian Stallion, Mike Grella, left straining on the leash on the bench. All is looking well as the mighty whites look to record their 15th straight league win at Fortress Elland Road against a Gillingham side who have yet to win away from Kent this season. Don't be fooled into thinking that it will be a stroll in the park though as the Gills are a very capable side and will be well "up" for their trip to ER.
Good news this week that it looks as if the future of Thorp Arch has been secured by a loan deal with Leeds Council enabling a buy back lease arrangement between the two parties. Everyone with the future growth of Leeds United at heart will be pleased, no more so than me, but why did we need a loan when we've just trousered £6m for Delph? Where's that money gone? Also how can Leeds Council afford to splash the cash when they are going through a massive cost cutting exercise which has led to the Dustbinmen going strike as a result of proposed wage cuts.
I'm afraid it doesn't quite sit comfortably with me? 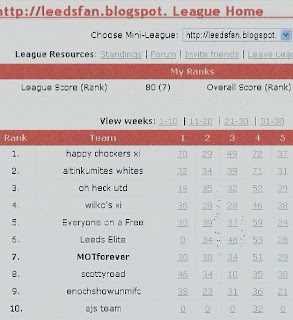 I know Larry has instructed his team to put next Tuesday's game against the Alloy wheel stealers to the back of their mind but for us fans the anticipation is mouth watering and with news that nearly all the tickets are now sold (despite the rip off prices) a full house is guaranteed. This lucky fan is doing the summarising on Yorkshire Radio's commentary with Thom Kirwin and Eddie Gray so in true Motty style I'm already swotting up on stats regarding previous Leeds Liverpool clashes. Names such as St John, Bremner, Keegan, Cantona, Yeboah, Viduka & Smith conjure up mouth watering images of games gone by when big name games at ER were taken for granted. Yes it will be a strange week..........Gillingham, Liverpool and then MK Dons.......arguably the last game is the most important. Mmmmm a sobering thought.
Finally the Fantasy League is turning into a battle royal between the Happy Chocker and Al with big Steve making up ground on the rails. Early days yet.....it's a marathon not a sprint as someone once said.
MOT
Posted by Andrew Butterwick at 17:26