As I hurtled around the fair county of Yorkshire in a mad dash to complete my work commitments ready for an early afternoon departure to Southend my mind was firmly fixed on whoever was responsible for scheduling a fixture requiring a 420 mile round trip on a Friday night. I was attempting a mental version of sticking pins in a Voodoo doll of him when the Happy Chocker arrived armed with his inevitable tesco bag full of cans! With Beefy on board and Ben & Luke picked up from Knottingley we were on our way heading down the heavily congested A1. My newly acquired Sat Nav indicated that our arrival time would be 6.20pm but that soon began to drift as we hit jam after jam and by the time we were crawling along the infamous M25 our ETA was out to 7.15. Mmmmm not the relaxing journey needed to contemplate the game ahead.

Not withstanding the horrors of the UK road system spirits were high in the car. The usual round of trivia quizzes kept some amused, but not Ben who was fresh from throwing a sickie for the day and was fast asleep in the back with his mouth gaping wide open...........not a pretty sight! Luke regaled us with tales of his trip to Soccer AM and the JPT draw. The rest of the car were in awe.................obviously the first question was football related..........so what's Helen Chamberlain like up close?
Eventually we arrived at Roots Hall with 15 minutes to kick off after a tortuous 5 hour journey so we missed the ritual pre match drinks and took our place in yet another packed away end to watch the mighty whites.
Beckford had recovered from his injury and was in the starting line up as was Kissy and Bromby at the back. Leeds started the brighter with their now familiar high tempo midfield grabbing the early advantage on a tight compact pitch. I had predicted that this was going to be our toughest test yet and all the early signs confirmed my worries as Sarfend scrapped for every ball and their two centre half's stuck to a robust approach to every challenge and tackle. Leeds were attacking the goal in the far distance from their adoring fans but that didn't impact on the decibel level pouring from the away stands as the faithful roared on their favourites in search of a 9th straight win of the season. Bromby , Becks and Snoddy all went near in the opening exchanges but gradually the Shrimpers fought their way back into the game and Shane Higgs was soon to the fore with an excellent save to keep the scoresheet blank. The game was frenetic with the ball at times impersonating a very hot potato as both teams struggled for supremacy. Once again the "new" steel curtain Leeds defence was snuffing out any threat from Southend but as the half drew to a close Grant missed a glorious chance to break the deadlock when he shot over from 8 yards with Higgs beaten. Maybe the curse of Roots Hall was about to strike again? Sounds a bit like a Sherlock Holmes novel doesn't it? 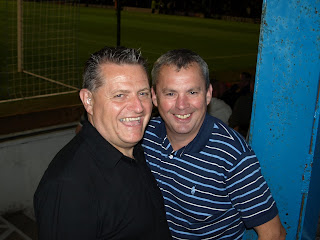 The half ended all square with Leeds just shading the proceedings without seriously testing the home keeper.
A weird thing happened during the break, no Ken Bates didn't come round and reimburse the faithful for the cost of their journeys, but as the Happy Chocker was talking to an old school friend he'd not seen for years I was approached by a similar school friend who I'd not seen for some 38 years........spooky. The friend in question, Barry Copley, was with a group who had clearly made the best of Essex hospitality and were dancing away with gusto to the blaring HT music around us as we tried to remember snippets of those long gone school days. Just goes to prove what a small world we live in. To finish the HT entertainment a rather inebriated heated debate near the Yellow Peril resulted in an early bath for a rotund overweight antagonist. Calm down dear!
Back to the game and Leeds started the 2nd half attacking the end housing their raucous fans. My many tweets had been snapped up by cyberspace and with Twitpic and Twitvid working well I was able to share some of the fantastic atmosphere that we were generating. Beckford was having running verbals with both the goalie and the centre half and started to complain to the ref and the linesman.............Just get on with it Becks..........the match had by now turned into a war of attrition as each attack at either end was smothered by eager defenders and chances were few and far between. Lubo came on for the injured Crowe to add to the anxiety of this fan but as he did last week the big man turned in a sterling performance.
Now as we all know penalties have figured highly on our agenda this year? So when Mr Bromby conceded our 3rd of the season the collective hearts of the away fans sunk. But in Shane Higgs we have a goalie who grows more impressive with each game and even though the action was some 100 yards away the reaction of the Leeds fans confirmed the score was still all square as Higgs became an instant hero. (my TwitVid is enclosed)
Now a saved penalty can often lift a team and the industrious Leeds team changed up a gear to and try and steal all three points and when when Becks pounced on a slip by the big Southend centre back it looked as if our talisman striker was going to settle the game but for the intervention of the impressive Barratt who's last ditch tackle saved the day for the Shrimpers.
Snoddy gave way for Killa and the match opened up a bit for the last 10 minutes..........chances were now flowing at both ends and first Beckford missed from 6 yards and then Grella, on for Becchio, floated a header agonisingly close to the Southend upright. At the other end Leeds defended impressively at least three free kicks from dangerous positions..........now that's something I didn't write last year!
The final act of an absorbing, if not a bit scrappy, game was a stonewall penalty claim for Leeds as Grella was thwarted by Barratt's hand in the box. Wouldn't have mattered because we all know we miss every penalty we get!
In the end 0.0 was a fair result and we did move up a place to head the league, if only until Charlton play Southampton. Our unbeaten record is still intact and confidence in the team is high so not a bad nights work. My only concern is with our over use of the long ball over the top trying to use Mr Beckford's pace, as we found at Southend we really need to vary the line of attack to break down the more resolute teams.
The clock had just moved onto 2am by the time I got home. 9 hour round trip for a 0:0 draw? Magic!
Next up is Gillingham at home. I've a sneaking feeling that we might still be top of the league then. As the Happy Chocker commented Southampton can't be crap all season and maybe they'll surprise the Addicks? I love optimism!
MOT
Posted by Andrew Butterwick at 09:19