After the sobering defeat in South London on Saturday our rather battered group of fans negotiated all sorts of difficulties to make the 200 mile trip to the home of the Pirates of Bristol. The Happy Chocker had recovered from flu, Quiet One was able to come due to the school hols and Beefy & Norton negotiated fair and foul excuses not be at work in the afternoon to make up a very full car. Initial predictions from our merry band were positive even Mr grumpy Beefy predicting a Beckford hat trick! 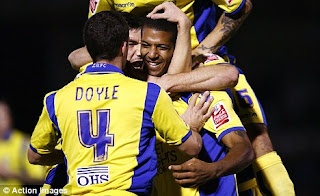