Millwall away is always one of the first games to find when the seasons fixtures are first published. The rivalry is borne more out of dubious off the field confrontations of the past rather than any geographic or Footballing reasons. Whatever the reason the match is always guaranteed to generate a white hot atmosphere and if the most recent games are anything to go by a cracking game. So the early morning trek to York station to catch the southbound train to the metropolis was filled with that wonderful drug of match anticipation that football addicts the world over are so familiar with.
HC and the Quiet One together with Beefy and his crew boarded the packed train. We were "lucky" enough to sit near a group of teachers, one of which had an awful case of verbal diarrhoea. God help his pupils!
After meeting up with Aidey, Luke and his cockney mates pre match refreshments were taken in O'Niell's on Euston Road along with an eclectic mix of other fans for Stoke, Forest & Spurs. The final part of the journey to the new Den is always high on tension as both sets of fans board the same train from London Bridge. Forest and Palace fans also were on board to add spice to the mix. With more than half the train packed with Leeds fans an uneasy truce was observed until we spilled down the away gangway at South Bermondsey station. The relief was massive, especially as the toilets at London Bridge were broken so the alley way to the ground suddenly became an al fresco toilet for desperate Leeds fans, me included, in killing a few of the overgrown weeds through the fence!
Once inside the ground the large Leeds following greeted their heroes with the usual vocal support and dismissed the taunting from the baying home fans. The inevitable insensitive Turkish flag fluttering in the home stand was sensibly confiscated by a steward. The atmosphere was crackling with tension, anticipation and hate in equal quantities as the game kicked off in bright sunshine. Kissy was back at the centre of the Leeds defence with Bromby displacing Crowe at right back. Sam Vokes kept his place up front with Jermaine and Casper remained in goal in the absence of the injured Higgs.
The two sets of fans were still exchanging the usual pleasantries when Harris ghosted in to head the opening goal for the home team after just 3 minutes. Errm who was supposed to be marking him? The Millwall hordes went wild. This was going to be a difficult afternoon. 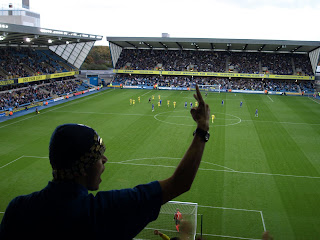 Leeds absorbed the early onslaught and caught their breath and clawed their way back into the game. The magnificent Kisnorbo put Leeds level after he returned with interest as his header was cleared into his path. 1.1. Stick that up yer Jellied Eels!
That set the the tone for a frenetic first half with both teams heavy on endeavour and light on class. Neither Goalkeepers were unduly tested although there were chances at both ends. Mr Harris was causing lots of problems with his intelligent running whilst Sam Vokes nearly evaded the home defence as HT approached. Beckford was taking the expected abuse from the home crowd after his elbowing incident at ER and as ever he seemed to wilt in the hostile arena. Snoddy thundered a free kick into the wall just before the HT whistle but his half hearted claims for hand ball fell on deaf ears.
HT reflection was uncomfortable. Leeds were battling without dominating or keeping hold of possession. Millwall's defence looked resolute with Robinson dominating any long balls, of which there were plenty. Surely Larry will be insisting the ball goes wide and preferably on the grass in his team talk?
Leeds started the 2nd half attacking the packed away stand but it was the blues who began to get the upper hand with their physical, busy and at times neat football. Casper was lucky that Morrison chose to head straight at him when a golden chance dropped in his lap. Millwall were carving out chances that chipped away at the Leeds fans confidence. Leeds did have their chances but Mr Beckford's usual coolness in front of goal was nowhere to be seen as he spurned precious chances, notably as he rounded the home keeper and tried an audacious shot from a tight angle that nearly hit me in the stands. Snoddy was not amused as he stood on his lonesome on the penalty spot! 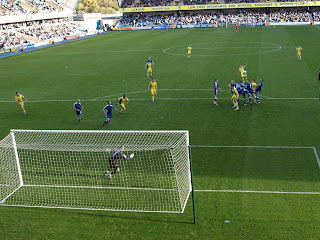 Nerves were raw and exposed as the clock showed 20 minutes to go as Kandol joined the fray in place of a tiring Vokes soon to be followed by Gradel on for Snoddy. Get ready for the final hurrah. A Millwall defender escaped with just a yellow after holding back Beckford but Snoddy blazed the resultant free kick wide. But it was the men from Bermondsey who got the crucial next goal as Alexander headed an inviting cross into the net past a static Casper. The ground erupted on three sides of the ground whilst the away fans momentarily were stunned into silence. I suppose it's a back handed compliment when the opposing fans celebrate as if they've just won the FA Cup but we were focused on willing another late, late comeback but despite an absolute stormer of a shot from Kandol breaking the crossbar on 90 minutes it wasn't to be. Our unbeaten start to the season was over. The home fans had a knees up at the final whistle as we responded with defiant choruses of MOT and "We are top of the league" which we still are after Charlton's draw.
Don't like losing at any time but with taunting chants of "Istanbul" and cockney's dancing with delight didn't enhance this experience. Neither did the torturous wait and route away through London with the understanding Met Police our escort all the way to Kings X.
It's a long way home when you lose and the post match banter & bravado had subsided into dosing and listening to iPods by the time we got to Newark.
October is the "month of death" on our fixture list. To be still at the summit of the table with just one game to go should auger well for the rest of the season but we haven't played particular well since pushing Liverpool all the way in the Carling Cup. Larry needs to regroup ready for our trip to Bristol on Tuesday and our game in hand on the teams below.

Posted by Andrew Butterwick at 08:48