The weekends here and this week we're thankfully kicking off at 3pm on a Saturday for a change. Our opponents are of course Millwall. A battle of the titans is in store if last years clashes are anything to go by. As ever there will be a full allocation of 2000 Leeds fanatics making their way to Bermondsey to watch the match of the day in Div 3. Our little band of die hards including the Happy Chocker, Beefy and the Quiet One will be chancing our arm on the train from York in the morning so expect some serious tweeting from 9.30am onwards @MOTforever. 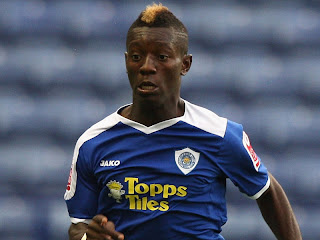 On the team front Kissy returns after his virus to strengthen the back 4 but Higgs, Robbo, Rui & Ben Parker are still all ruled out by injury.
Robbo's is an interesting one? The very next match after Mr Gradel made such a stunning impact on his 10 minute cameo and thrust himself in front of the Pieman in the pecking order he picks up an injury in the reserves. Now if I was cynical, which I am, I would suggest that our highest paid player's injury is a little too convenient for my liking and have a vision of him sulking at home whilst still coining in his not inconsiderable salary?
Speaking of Max Gradel he was a definite breath of fresh air when he came on with his jinking runs and creative touches on Monday. Making an instant hit with the fans but he's definitely not a shrinking violet............I mean who plays football in fluorescent green boots and a streak of yellow paint his hair, well Max does. He must be a confident chappie because if I'd have played against anybody like that they would have been launched into row z in the first tackle! The thought of Snoddy on one flank and Max on the other is a mouth watering one and will strike fear into League 1 defences especially with Mr Beckford knocking in goals aswell. Brilliant!
A special mention for old Bradders this week. Once again he headed in a vital goal on Tuesday, his 6th in 12 league starts. He gets better every week and is a real threat in the air and reminds me a bit of Gary Speed with his heading ability.
I'm confident that Larry will have the team in the right frame of mind for the intimidating atmosphere of the New Den and they will carry out another smash and grab raid to secure another 3 points.
Strange happenings elsewhere in Football as Gareth Southgate was sacked after his team beat Derby to go within a point of the top of the championship. Wonder what would have happened to him if they'd lost? Football in scouse land has been painful as first Liverpool and then their Bluenose neighbours got stuffed in Europe............and not a beachball in sight although I suspect those Manure fans just might have a few with them on Sunday when the big two clash?
Everyone's been fixated on Nick Griffin this week and his appearance on Question Time so I couldn't go without a mention. After his pathetic performance on the show it occurred to me that you should never trust a political leader with a dodgy eye............can you Gordon?
C'mon Leeds let's maul the Lions tomorrow.
Can't wait.
MOT
Posted by Andrew Butterwick at 18:25