Back to the League after the magic of the cup!

Matches are coming thick and fast now. Tonight's game is the first of 8 Leeds will play in December. In fact this weeks games at Oldham, against Udders on Saturday and the Kettering replay will have a big say on how our season develops? Another set of positive results and we will be entering the hectic Xmas period with a more than healthy lead at the top of the league plus the mouth watering prospect of a trip to you know where in the new year. Any slip ups this week will give the chasing pack a glimmer of hope in hauling us back over the festive season. All adds to the excitement though. 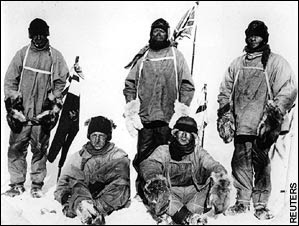 Excitement is what we definitely need tonight as Boundary Park in December is not for the faint hearted. It's rumoured that when Scott of the Antarctic was looking for somewhere to practice before his ill fated attempt to reach the South Pole he used Boundary Park because it has a remarkably similar climate to the South Pole................just no penguins! So winter woolies will be the order of the day for the fans and I suppose the players will be cossetted with gloves and body warmers. Speaking of which why does Jimmy Bullard play with his Grandad's polo neck jumper under his shirt?
Lord Grayson will have more options tonight than he did on Sunday. Hopefully Kissy will be back and please god will you fix whatever is wrong with Mr Higgs and get him playing again. Kettering's goal was an absolute shambles.
Prediction wise I would be happy with a point tonight and a win on Saturday but I think the confidence and belief the team has at present will carry them through to another 2:0 win. Speaking of team spirit I was watching "time of our Lives" Leeds '92 last night on Sky with Strachan, Chapman & Gary Mac. The team spirit and bonding of that team was clear to see , even with Cantona stirring the pot. Just wonder if we are seeing a similar team spirit in today's bunch? I for one thinks so.
Anyhow must go now or I'll miss the KO. The report will appear tomorrow evening. I might have thawed out by then!
MOT
Posted by Andrew Butterwick at 16:55

Hi, it's a very great blog.
I could tell how much efforts you've taken on it.
Keep doing!