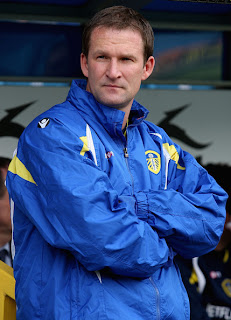 So this was the game that we were supposed to get back to winning ways after our stuttering performances away from home. After Charlton shot themselves in the foot last night all was set up for Leeds to take full advantage against an average Walsall side.
Sat in our usual position in the kop with the usual nonsense spewing from the stewards mouths we started what is a crucial week in our league campaign. Beckford was back in the starting line up so everyone was in a positive mood as the game got under way.
So what happened? The first half was very similar to what we've seen recently. Plenty of possession for Leeds helping them dominate the game but where was the end result? True answer is apart from a sweet move and a Bradley Johnson shot absolutely nowhere. We huffed and puffed and played lots of intricate football but once we got inside the last third of the field time and again the final ball or shot was a major disappointment. Casper was a virtual spectator for the first 45 minutes except for a well hit free kick that skimmed over the bar just on half time. The HT whistle was greeted by muffled boo's. The natives were beginning to get restless......................and with good reason.
Our seemingly inability to test opposing keepers with decent shots is frustrating to say the least. Still Lord Grayson had chance to motivate and rally the troops in his HT team talk. It wouldn't have been easy because nobody had played to their potential.
The Walsall goalie, Clayton Ince, enhanced his already high reputation with Leeds fans by doing a fantastic dance to the opening chorus of MOT in front of the Kop. This lifted the spirits in the crowd on what was a cold evening. Surely Leeds can go up a gear and get the goals they need?
Nope.................after a tepid opening it was Walsall who found themselves in front after a well taken volley beat Casper.
1.0 Walsall I texted the absent big Steve.
The now familiar sick feeling in the pit of my stomach was back. We can't make a complete bollox of this opportunity to claw ground back on Norwich and put some nice distance between us and Charlton can we? Errr well it looked like it.
Then we got one back courtesy of yet another miss hit cross but this time the dancing Walsall keeper had anticipated a normal cross and was left stranded as the ball flew into the net. 1.1 very lucky.
Still we were playing towards the kop so we should be able to push on and win it. Nope. We had plenty of pressure but not a lot of shots on goal. Grella and Gradel had come on for Becchio and Snoddy. With no Becchio up front we still played lots of long balls? Presumably for Mad Max to outjump the defence?
They did spark some energy into a decidedly lethargic Leeds side and there was a brief moment I thought we would snatch an undeserved win.
But no the sick feeling got worse on 80 minutes when a header from the Walsall centre half appeared to go over the line..................well at least it did to the referee, who looked spitting image of Monty Panasar. 2.1 Walsall. Can't believe this is happening.
Howson came on for the last hurrah and even Casper came up for a corner. The ball whizzed about in the Walsall box a lot but there was no end result. There was no muffling the boo's as the final whistle went as disgruntled Leeds fans streamed away from the former fortress Elland Road. "Garbage" "Shocking" and "Clueless" were some of the printable comments I heard on the way back to the car. The radio phones mirrored the views. That fantastic day at the Theatre of Shite seemed an eternity away as did our trip to Stockport when we were 8 points clear at the top of the league with a game in hand. Confidence seems to have drained from a lot of players. Is it the number of games they've played? Is it the new faces that have come in? What ever it is we are now in the middle of an official slump in form that is seriously damaging our chances of automatic promotion. 6 points from 7 games since Stockport is the reason the chasing pack are rubbing their hands in glee.
On a shocking night for Leeds it's very difficult to pull any positives from the game? Nope can't think of any.
The turbulence continues and home to Brighton and Oldham suddenly look like massively tough games. After that we've got the Puppy Dogs away. They will be relishing the prospect of facing a stumbling Leeds at teh Galpharm! I just can't believe it.
So roll on Saturday in the hope that our trust in Grayson is well founded and he finds the secret to repair the damage.
Can't wait.
MOT
Posted by Andrew Butterwick at 22:45