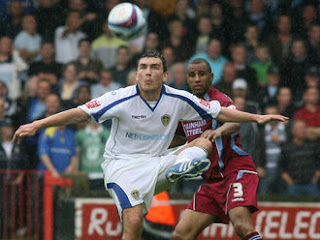 Football derbies bring their own special brand of excitement and this weekend's clash of the West Yorkshire titans is no exception. Yes the two clubs might be scuttling about trying to find a way out of Division 3 but come kick off time on Saturday lunchtime you will struggle to find a more intense atmosphere than that at the strangely named Galpharm stadium.
Unusually Leeds will travel to the home of the Puppy Dogs as underdogs thanks to the hosts impressive unbeaten 10 game run and their recent record against the mighty whites. I think this will suit Leeds as the level of expectation amongst the Puppies fans is stratospheric. Of course this is based on the fact that they have taken great delight in winning the "West Yorkshire Cup" for the last couple of seasons but I suppose when you support a team who last won a major honour when Adolf Hitler was still a young upstart on the periphery of German politics and the first and last General Strike was paralyzing Britain its to be expected! Anyhow I struggle to take a team seriously that has a first team strip inspired by a Tesco carrier bag logo and a stadium designed by someone who couldn't drawn right angles.
The game itself should be an absolute cracker as Lee Clark always sends his Hudderstoon team out to attack with potent players such as Pilkington, Rhodes and Novak key to their free scoring style. But with the rock that is Kisnorbo back in the Leeds team and Lowry and Hughes providing solid support on the flanks Leeds have the resolve to blunt the Puppies bark. Whilst up front the focus will be on our own double Becks I'm backing the sparky Scotsman, Snoddy, to be the pin that bursts the home sides balloon with his measured trickery in tandem with young Aidey on the other flank.
Away from the emotion of the derby and the local bragging rights it's also a key game in the promotion battle. Leeds are nine points in front of their neighbours so for Udders it is a must win game if they are serious about snatching an automatic place. Putting local rivalries aside I think Swindon and Colchester are the bigger threat. After all the Puppy Dogs have yet to win against top 7 opposition. Their run in is testing to say the least.
After our stuttering form of late our destiny is still in our hands though and harvesting an average of 2 points per game over the remaining 14 games should be enough to guarantee promotion and more than likely the title. In contrast Hudderstoon need to win 11 of their remaining 14 games to stand a chance of going up without the pleasure of the play offs.
So everything is set for a titanic struggle, hopefully as exciting as the December clash at ER, that will have all our promotion rivals hoping for a draw. I wouldn't be too disappointed with a point but 3 would be good and it would push the pressure back on the Canaries before they kick off just along the M62 against the Oldham thugs. Our rollercoaster season continues.
Can't wait.
MOT
Posted by Andrew Butterwick at 07:43