Football is a game of passion, hope, expectation and fear. We saw all of those characteristics at today's game. This post will differ than previous ones because I started the day with enough passion and expectation to last a full season and ended it totally distraught after another choking performance by the once mighty whites. 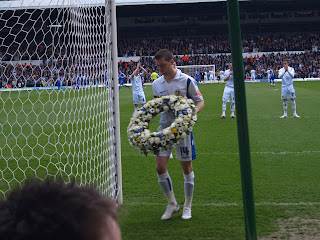 The pre match minutes silence in memory of Kev Speight and Christopher Loftus was emotional and poignant. A wreath was placed behind each goal and all was set for Leeds to mark their tragic anniversary with a sterling performance. The opening salvos were encouraging for Leeds as they carried on with the passing game that served them well last week. Chances for Snoddy and Beckford were spurned but at least the opposing goalie was earning his corn. At this point hopes were high. Nearly 28000 had packed into Elland Road to cheer the fallen giants on to a victory that would cement a spot in the automatic promotion spot. All the action was in the Swindon half as the visitors retreated into an effective defensive block each time Leeds had the ball. For the first time since the Tranmere game I thought we were going to win. How wrong was I?
As half time approached Swindon attacked and the home defence capitulated far too easily. Yes Hughes slipped allowing his man a free shot on goal..............but why did the winger have so much time to cross the ball? Why didn't Higgs save what was a slightly mis hit shot. I found my self with my head in my hands.......................again. Swindon then opened us up again and but for a fine Higgs save we would have gone into the break 2 down. Expectation was replaced with fear.
The chat in the crowd was muted at half time. Leeds fans have been through the wringer in recent years but their capitulation from League leaders to play off strugglers has been difficult to stomach. Resignation to another disappointing day hung heavy in the gents HT debate.
Any hope that Leeds could build up a head of steam in the 2nd half was soon extinguished as Swindon went two up with a deflected shot. When your down don't expect any luck. Shoulders dropped and heads went down by the men in white. Beckford unsuccessfully chased a ball down in front of the kop and when a torrent of abuse drifted his way he responded in kind to the crowd.
There was never a 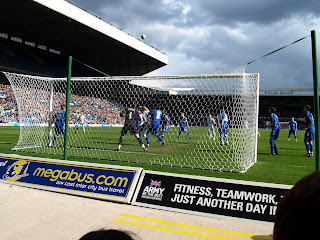 ny doubt about the result from here on in. The third and killer goal went in soon after in embarassing fashion as Austin headed in unchallenged. The only surprise was that Swindon didnt score more goals. Naylor, Grella and Doyle were withdrawn for Max, Dickov and Parker to no effect.
Most of the crowd were streaming out of ER long before the end including for the first time in living memory this fan. The chances of Leeds going up this season have disappeared with this defeat in my opinion. 15 points from 16 games reflects our performances and that will not get us through the play offs. We may even have the ultimate indignity of falling out of the play off places to be replaced by the Puppy dogs. Nightmare.
Where has it all gone wrong? Our inability to score on a regular basis since Xmas has been our downfall. But we've got the same players who took us to the top? Talk of getting rid of Grayson was rife after the game yet he was a Messiah on Jan 3rd at the the Theatre of Shite. Beckford who has supposedly signed a pre contract deal with Everton to play in the Premier League next season currently doesn't look as if he could score in a brothel. Snoddy who was reportedly on the radar of bigger teams in the January transfer window suddenly looks as if he couldn't dribble his way out of a paper bag. As Kammy would say..................Unbelievable!
So we carry on with blind faith. Monday brings an a away day at Yeovil and with it fear of a 5th defeat on the trot. It's not so long ago that we were disrespectfully asking "Where's Yeovil" but now we travel with very few fans, if any, confident of anything other than another embarassment in front of the nations TV cameras. And yet if we do defy logic and win we could be back to 2nd in the table come Monday night!
So I will be up with the larks and on the road by 6am Monday morning in the forlorn hope that somehow the team that beat Salford Yanks on that glorious day in January can overcome the yokels from Yeovil. How bizarre is that? Just another day in the life of a Leeds fan......nothing is ever simple.
Can't wait.
MOT

Todays photos will be up Sunday 11am.
Posted by Andrew Butterwick at 19:05

Nothing is ever simple in the life of a Leeds fan. As always though the support will be there on monday (my hubby and son included who will be setting off at 4am) and fingers crossed they win.

Kerry,
Thanks for the comments. Your spot on with the "Nothing is ever simple" comment! Roll on Yeovil