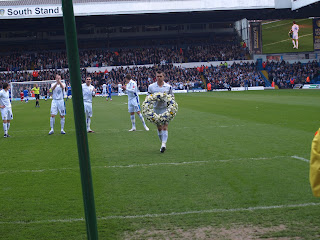 Less than 48 hours after Leeds's painful performance against Swindon we're on our travels again to deepest Somerset to play mighty Yeovil. So despite confidence, resolve and loyalty taking a massive battering yesterday I, along with many more Leeds fanatics, will be out of bed before they've fallen asleep in order to make the trek for the lunchtime kick off against the green hoops of Cider country. Once again we have sold out the away end. Once again the motorways heading south will be littered with buses, vans and cars all flying the blue, yellow and white of the mighty whites. Once again the pre match gatherings will be filled with a bit of hope, expectation and bravado. The loyalty shown by Leeds fans has surprised many. When we were relegated to the 3rd division there were many who gleefully predicted a hemorrhaging of the whites support but despite this being the 3rd long season we've suffered in the wilderness that fantastic support is still resolutely behind the team in significant numbers. A fact that does rankle with many other fans of how shall I say "less well supported teams" Question is just how long will it last?

Yeovil is not a million miles from Hereford where on a wet midweek night last season we witnessed the worst performance ever by a team wearing the famous Leeds strip. Thankfully that proved a turning point and we kicked on to follow it with a long unbeaten run that took us to the play offs. Could tomorrow be the start of our "kick on" after the Swindon debacle? Time will tell.

So what team will Larry send out? Grella? Lowry? Howson? Becchio? Naylor? Beckford? Watt? I suspect even Gypsy Rosie Lee off Blackpool prom won't be able to predict the team that trots out just after noon? I think the loss of Kisnorbo has been a massive hit to our prospects but it's the other end of the pitch that needs to be sorted if we are going to rescue some dignity. 4 defeats 7 goals against and none scored. It hurts just typing those stats but for those who have witnessed Leeds play since Xmas it's just the sort of record we've feared. Larry is under tremendous pressure and he will be a worried man this evening. His career is very much on the line in a match that will be beamed live into the living rooms of the nation. Failure to beat Yeovil will heap more weight on his shoulders as the clamour to "do something" will increase ten fold.
So it's a make or break game and we're only 2 games into the "8 game season" Nerves will be edgy, tension will be high & tempers will be frayed and that's just in the crowd.

Another in a long line of roller coaster games in prospect for the Mighty whites? So are the loyal Leeds fans Lemmings heading for the cliff's of disappointments or Lions stalking their promotion prey ready for an unexpected kill? Answers on May 8th................or later!
Can't wait!
MOT
Posted by Andrew Butterwick at 20:10