Outside the sky may have been blue and the sun bright but the mood in the car was more grey and drizzly as we headed down the M180 for the clash with the Iron.  Firstly the Quiet One had lost his argument with his Mum on which he should attend, the game our his Mum's birthday party and secondly the Happy Chocker was coming down with Man Flu.  Add to that trying to figure out anything positive to say about our prospects in the forthcoming game and you can understand that the usual optimistic pre match mood took a bit of a battering.  Pre match refreshments in the Old Farmhouse pub next to Glanford Park lightened the mood though.  Andy O'Brien was starting at Centre Back, yes he's short of match practice but he has got good Premiership experience.  Mad Max and Killa also bagged starting spots and Paynter had made it onto the bench. Lord Larry appeared to have gone for a 5 man midfield with Becchio the lone striker.  Prediction time saw HC still fearing the worst and a 2.0 defeat whilst I hopefully plumped for a 1.1 stalemate.

Inside the "compact" ground the usual sold out away end was in good voice.  It never ceases to amaze me how come rain or shine, bad defeat or stunning win the Leeds fans are always there giving there full support.  That's not to say that there's not the odd critic amongst the Leeds faithful.  In the first 5 minutes the guy two rows behind me has gone through the whole team calling them all Shite.  I often wonder why fans like that bother? 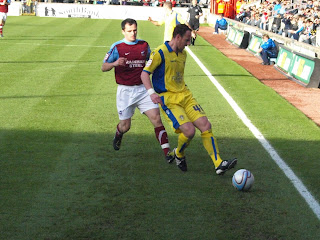 Leeds were soon giving Mr Shite some early ammunition as Bruce and Schmeichel reprised the mis-communication that led to the first Cardiff goal and but for an astute clearance from O'Brien Leeds would have been 1 down. Welcome to Leeds Andy!  Despite his lack of recent match practice the loanee from Bolton showed some assured touches and sensible distribution in the opening 5 minutes.  Mmm maybe he could just bring some much needed organisation and control to our leaky defence?  Leeds were looking bright and to the shock of the travelling fans went in front on their first real attack.  Jonny Howson grabbed a bouncing ball in the centre circle and sent an intelligent ball into the path of the effervescent Mad Max who gleefully sprinted into the box and buried the ball in the corner of Warner's net.  1.0 Leeds.  Get in you unexpected beauty!  "Are you watching Mr Shite"  82 minutes still to go though. 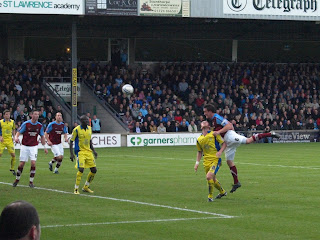 Spurred on by the goal and a bit of authority in defence Leeds had the better of the next 20 minutes.  Scunny's danger man was Freddie Sears, on loan from West Ham, who was having some joy attacking Connolly down the right flank but other than that for once the back four looked relatively solid.  Then Scunny equalised.  A routine floated corner was met at the back post by full back Byrne who looped what seemed like a harmless header into the Leeds net. My head fell into my hands and Mr Shite was going a rather fetching shade of purple.  Here we go again.

Maybe because of O'Brien's presence or maybe because of Scunny's lack of belief or a combination of the two but Leeds didn't fold and instead battled away to half time still level.  The gents debate was a combination of surprise at how we'd gone ahead and the inevitable criticism of any Leeds player not at their best. Faye and Schmeichel were today's targets as Faye's more "relaxed" and "serene" style for a midfield dynamo was interpreted as "just a lazy bastard" by the urinal judges.  Kasper seemed to be having trouble with his kicking, maybe due to his recent injury, but that didn't save him from and ear bashing from the hyper-critical gents queue.

The second period got underway.  Leeds still weren't firing on all cylinders.  I would have gladly taken the 1.1 draw there and then and headed back down the motorway.  Mad Max was having one of his good matches where his boundless energy matched his dribbling skills as he taunted and threatened the Iron defence every time he latched onto the ball.  Typical of this was when he bustled his way past the Scunny full back only to be hauled down just outside the box with 2 minutes on the 2nd half clock.  Expectations rose in the away end as Leeds prepared for the free kick only to disappear just as quick as the ball sailed harmlessly over everyone for a goal kick.  Mr Shite used his favourite word at least another twice.  Leeds did look the more eager of the two teams without really convincing their discerning fans that this was going to be a happy away day.  Then Lord Larry made a key decision as he took off the under-performing Faye and replaced him with Bradders.  Mr Shite was in his element as he berated both the outgoing player and the incoming player in the same breath.  What a tosser! 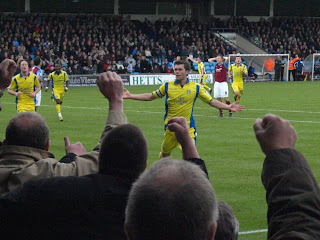 The master stroke by Larry certainly stiffened up the Leeds midfield.  All of sudden Howson was free to push onto the Iron defence and Leeds looked a different team. On the hour Hemingbrough's finest, Mr Howson, punished a Leeds type defensive error in the home defence with a cool finish.  2.1 Leeds.  Even Mr Shite was pleased. Momentum surged through the Leeds team like a shot of adrenalin and all of sudden Leeds were all over Scunny like a rash with the ecstatic away fans roaring them on.  Even when Kasper tipped a rasping shot over the bar at the other end it didn't detract from Leeds' new found superiority. If Monday was a nightmare this was a dream come true.  Next Mad Max weaved his way past a clueless defender and caressed a perfect cross to the back post where Howson headed it back past Warner into the net. 3.1 Leeds and pandemonium in the away end as bodies flew past me in their attempt to greet the celebrating Leeds players.  Leeds were on fire and Scunny knew it.  They pushed forward looking for a goal to get them back in the game which left them fatally exposed at the back.  A quick ball out of defence, Becchio rolled his man and sprinted away towards the box before rolling the ball back to the fast arriving Howson.  I didn't see the ball hit the net but there was only one place it was going to end up as he majestically completed a 15 minute hat trick.  How shite was that!

It's been said many a time but Football is definitely a funny old game.  Who would have thought at half time that we would get 4 goals? Certainly not me and I'm sure nobody else in the ground.  Now all we had to do was hold onto a 4.1 lead. Nervously the name Preston North End was whispered. I didn't see anyone unfasten their seatbelt! 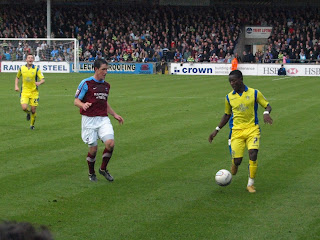 But Leeds weren't to be denied this time.  Paynter and Nunez came on for cameo appearances as Leeds saw the game out with ease.  No tightened gut, no dry mouth, no worries.  This was a well earned victory for Leeds.  It doesn't mask the problems we've had in recent games but it does provide a massive confidence boost ahead of a difficult trip to Coventry.  Smiling Leeds fans contrasted with sullen Scunny fans as we walked back to the car.  Mr Shite was struggling to find a Leeds player to libel and all was well with the world. Howson was obviously man of the match but O'Brien, Kilkenny and Mad Max all had games to be pleased about.  The consistently inconsistent league continues apace.

So a result that nobody could see coming even after Howson's first goal has lifted spirits at Leeds.  Those circling vultures have retreated with the "sack Grayson" brigade for the time being.  There's still a long way to go this season and we need a couple more performances like today's to get all our confidence back but this was a satisfying and dare I say unexpected win.

Coventry await on Saturday with their impressive start to the season.  If we carry on where we left off today we have a chance of getting another three points.  Hope springs eternal!
Can't wait.
MOT


Posted by Andrew Butterwick at 20:38

Hi, Im from Argentina, I write in the "Spanish Leeds" blog, if you like, link the site. Thank you, sorry for my bad english.
MOT!

Lazialle,
Nice to hear from you. I will put a link on to your site. How did you become interested in Leeds?
MOT