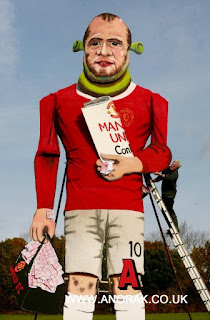 After picking up a niggling injury during his strenuous contract negotiations Salford's favourite Shrek lookalike sort solace in the austere surroundings of a 5 star holiday resort in Dubai.  With Mrs Shrek offering moral support the stellar money grabber's bruised ego is now on the mend and he's planning to make a spectacular return to the UK.  His manager has secured him the hottest deal in town. "This will show you are in touch with your public Mr Superstar" Mr Slimey Agent gushed as they snacked on a Roast Peasant. "Sounds good...what do I need to do" the money grabber enquired. "Just turn up climb to the top of a specially constructed wooden throne and smile.  Couldn't be easier and you'll pocket a cool half a mill for your trouble. Trust me you'll set the world alight with this performance" Money Grabber's eyes glazed over as the prospect of more money finding it's way into his bank account filled him with joy.  So much so that he never really heard his agent telling him the venue............."7pm Edenbridge Bonfire on Friday night.......don't be late"  "OK boss"

Back to Planet Leeds and Capt Birdseye has responded to Gary McSheffrey's whinging about Lord Larry's man management style with some typically caustic comments.  Now I'm only guessing but I don't think there will be many Leeds fans who witnessed Mac's efforts in a Leeds shirt rushing to his support.  My abiding memory of his 11 appearances was his numerous mis-hit crosses that ended up in the kop.  Even the goal he got was a mis-hit cross.  No I think Capt Birdseye got it spot on when he suggested Mac should have done his talking on the pitch.  I just hope he doesn't decide to take that advice literally at 3pm on Saturday!

The game against Coventry will be another stern test for Larry's rejuvenated troops.  The Sky Blues sit in a lofty 4th place in the league after some impressive early season form has lifted expectations around the Ricoh Arena.  Speaking of raised expectations the 6,500 mighty whites fans who will pack the away end will be eager to see Leeds carry on the form that blew Scunny away in the 2nd half at Glanford Park. That victory was achieved using a 4.5.1 formation on a tight Scunthorpe pitch.  Will Larry use the same tactics against Aidey Boothroyd's charges on the more expansive Coventry pitch?  Was Andy O'Brien's impressive debut a flash in the pan?  Will Howson's perfect hat trick inspire him to greater things?  Time will tell.

The news of the management shake up at the LUFC academy caught my eye earlier this week.  In recent months there have been less than complimentary stories drifting out of Thorp Arch regarding the organisation and management of the once envied academy.  The stream of young stars coming out of TA seems to have stalled recently so hopefully this will put what is undoubtedly one of the top training facilities in the country back on track.........just in time for our next attempt in the Money Grabbing League?

So our rollercoaster season continues at Coventry.  As ever I will be there with the Happy Chocker, the Quiet One and 6,497 other Leeds fanatics.  The decibel level's will be high.  The atmosphere will be white hot.  Should be a cracking game...........as many families will be doing this Bonfire night.........light the blue touch paper and stand back......let the fireworks begin!
Can't wait.
MOT
Posted by Andrew Butterwick at 08:35