The last time I watched Bristol City at Elland Road was back in the 70's when the 3 day week forced an FA Cup replay to be played at 1pm on a Wednesday afternoon. A packed Elland Road saw Bristol pull off one of the shocks of the competition as they overcame the mighty whites 1.0. I was one of the thousands locked out that day and subsequently found a vantage point on top of the advertising hoardings next to The Peacock where I was able to see about a third of the pitch.  Heady days...............this time was a bit more conventional.  For one thing we were kicking off at 3pm on a Saturday, something we've not done since we met the Blunts from Sheffield.  The Happy Chocker and I decided to sample the delights of the refurbished Centenary Pavilion before the match and we were well impressed.  The more than adequate Pie and Pies were demolished as we watched Manure scramble a draw against Villa on the big screen.  The team news caused the first surprise of the day.  Somma starting up front with Becchio on the bench............. interesting? Still I decided to stick with my ever optimistic prediction of a 3.0 Leeds win much to the amusement of the regulars around me in our usual seats. 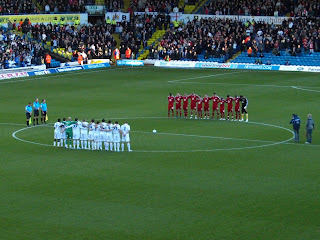 The crew of the Ark Royal were guests at Elland Road as their adopted city paid tribute to the ship and it's crew before the famous aircraft carrier is put out to grass. A one minutes silence in honour of Remembrance Day preceded the game and then we were under way.  A crowd of over 27,000 settled back to enjoy the game.  Could we continue our recent good form?  Would a 4.5.1 formation be effective at home? Would Leeds keep a clean sheet?  All burning questions that were about to be answered.

Lord Larry had indeed gone with the 5 man midfield leaving Somma as the lone striker supported by the raiding Snoddy, Mad Max and Howson.  Clearly the intention was to beat Bristol by keeping the ball on the floor.  Leeds started brightly with Mad Max, Howson, Killa all prominent as Leeds claimed the early superiority.  Somma, fresh from his international call up, took a lovely back heal in his stride and tested David James with a stinging shot.  Things were looking good.  I do like Saturday afternoon football. Leeds have developed a patient style of passing football of late that is easy on the eye and with Killa pulling the strings in midfield the two wide men, Snoddy and Max, were starting to enjoy themselves at the expense of the Bristol full backs.  Bristol looked decidedly average with ex Puppy Dog, Jon Stead, looking their only threat and it was him who so nearly upset the home fans after 20 minutes when he just failed to connect with an inviting cross from 8 yards out.  He did connect with Kasper though and left the flamboyant new Dad banging the floor in frustration as the pain of the collision seared through his leg.  Ouch!

Leeds pressure down the flanks was increasing though and after yet another Snoddy raid Ex England keeper James pulled off a superb save from the knee of his own defender as the Scotsman's cross fizzed tantalising across the box.  As the half  progressed Leeds looked more and more comfortable on the ball and had by far the greater amount of possession but Bristol were defending doggedly and clear cut chances were at a premium.  I detected a slight frustration amongst the Leeds faithful as the ever so patient build up play wasn't universally appreciated.  "Get it forrad" one of the 27,000 coaches near me urged.  Can't please everybody.
Half time came and I eagerly made my way to the gents for the debate on the first half.  I can only assume the lack of debate was testament to the control Leeds had on the game?  After all we gruff Leeds fans do like something to moan about don't we? 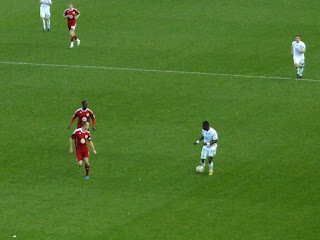 The 2nd half started with Leeds still on the front foot and Bristol content to hold onto what they had.  It was another quiet afternoon for Kasper.  The game wasn't igniting the crowd though.  Something needed to change if Leeds were going to win.  Lord Larry pondered his options on the touchline.  The Kop were already reminding him that Becchio scores more goals than Berbatov.  On the pitch both Mad Max and Somma were trying all they know to unlock the stubborn  West Country defence but to no avail. So once again Lord Larry played his super sub card and sent the black eyed Argentinian and Lloyd Sam into the fray to try and pinch a goal.  The expectation surged through the patient Elland Road crowd as at last they came alive.  Within minutes Larry's masterstroke paid dividends.  Snoddy again teased the Bristol full back before popping up a cross that had Becchio's head written all over it...............I was jumping for joy even before the black eyed one had steered a quite magnificent header past a helpless James! 1.0 Leeds and all's well with the world.  I do like Saturday 3pm kick offs a lot.

It is a well known fact that a team are most vulnerable just after they have scored and Leeds are definitely no exception so it was no real surprise that the euphoria of Lucciano's goal was soon replaced by despair as Stead got his foot on the end of a cross to equalise within 2 minutes.  Oh no don't do this to me Leeds, not again! 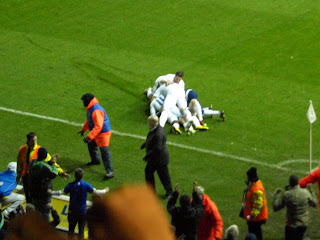 The genteel atmosphere of the first half had now been replaced by an electric pulse as the game exploded into action.  Sam surged into the box only to be hauled down by a rugby tackle.  The referee, who was 5 yards away, somehow pointed for a goal kick and not a penalty.  Which bit of the rugby tackle did he not see FFS?  That was soon forgotten as a minute later he was battling his way into the box again this time to get a shot away that James couldn't hold................who was there to pick up the rebound and slide it into the net?  No not Mr Berbatov.............................Becchioooooooooooooooooooo! 2.1 Leeds and the ground erupts.  Saturday afternoons just got a load better. 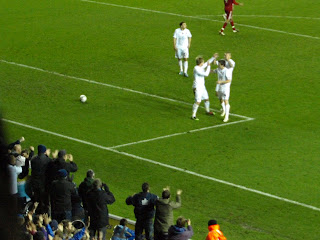 Leeds were now on fire raiding both flanks with menace.  The vociferous away fans were suddenly silent as Leeds went up a gear.  Becchio was at his rumbustious best causing havoc at the heart of the Bristol defence with his more aggressive  style.  The momentum was with the mighty whites now and the home crowd were baying for Bristolian blood like Romans at the Collessium.  The white tide was too much for the relegation strugglers to cope with though as McCartney hurtled down the left flank and surged into the box................will he shoot? No he took another touch and then chipped a perfect cross .................Lucciano Becchio come on down!..............the Argentinian rose out of the congestion in the box and serenely headed the ball into the net with a contemptuous flick of his lethal cranium........................... 3 goals in 17 minutes since coming off the bench, not a bad afternoons work?  3.1 Leeds and the home fans were rejoicing in style.

There was still time for Schmeichel to pull off a spectacular save to deny a goal bound shot that had it gone in would have set the home fans nerves a jangling but Leeds ended the game on a high pushing for a 4th goal.  The final whistle was greeted with a roar from the home fans safe in the knowledge that the mighty whites had just secured another 3 points that rockets them into 5th place in the table.  I very much like Saturday afternoon kick offs.

Howson had a superb game today but clearly the man of the match was Becchio.  When the Leeds wide men get crosses into the box there are few better finishers with their head in the country than Lucciano at the moment.  These are heady days for Leeds as Lord Larry and his team are suddenly getting to grips with what's required to win games in this ultra competitive league.  The talk on the way home was of play off finals and possible promotion.  Somebody on the radio phone in suggested "we needed a couple of seasons in this league before we go up" Bollox, in fact double Bollox..............we are currently displaying promotion form and there's no reason why come next May we are not planning a trip to Wembley at the very least.  Bring it on I say!

A nice trip to Norwich next week to gain revenge for last seasons defeat in the land of Mustard.  Not so sure they will be that keen on facing a Leeds side on this current form.  A tasty encounter is guaranteed.  Get the pies on Delia..........Lord Larry's Barmy army are on their way
Can't wait!
MOT