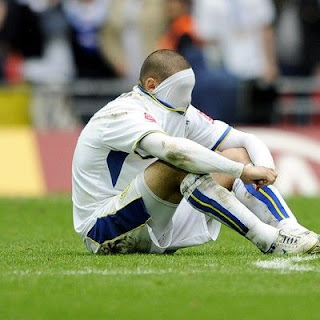 So Mr Johnson's agent has decided that his precious client is worth more than Capt Birdseye's is prepared to stump up?  Mmmmm I can feel a collective shrug and some serious indifference from the vast majority of Leeds fans with the possible exception of our more feminine followers?  Maybe if a few more of his "thunderbolt" shots had actually strayed near the goalposts instead of threatening the occupants of row PP in the kop he might have got a bit more sympathy?  But that along with his difficulty in retaining possession for more than a couple of frenetic moments have put him in the "tries hard but ultimately not good enough" club amongst the majority of Leeds loyal followers.  I suspect he will get short shrift on Saturday from the hard core away support who quite rightly will fail to see why anyone who has the privilege of wearing the famous white shirt and get paid for doing so, and not set the world alight in said shirt, should think he's worth an above average pay rise?  I know fans see these matters through a "romantic" pair of spectacles when in fact it is Bradley's living and you can understand him wanting to better himself but............................where else is he going to play in front of such large crowds and for a team with the potential of a Leeds United?  The correct answer is nowhere a fact his greedy agent has failed to compute!

One of my biggest annoyances in life is what are commonly called "jobsworths" usually combined with that misused justification "Health & Safety"  So this morning found me spluttering into my bowl of Shreddies when I read that our friends the Blunts of Sheffield had announced they were going to allow flags to be taken into Bramall Lane once again.  Apparently they have been banned for some unfathomable reason, I suspect some guy in a High Viz coat with a clipboard has done an over enthusiastic risk assessment.  Anyhow now that the ban has been lifted you would think that common sense had made a brief appearance at the home of the Blunts?  You'd be wrong because if any fan wants to fly a flag they have to get their flag it's very own safety certificate, FFS.  I mean apart from proclaiming the love for a shite football team what harm can a Sheff Utd flag do?  And before you think I've had one too many Werther's Originals see for yourself http://www.sufc.co.uk/page/NewsDetail/0,,10418~2206334,00.html

Finally to our trip to Norwich on Saturday and our clash with the Canaries.  In another decision by the FA that defies logic Grant Holt has been given a reprieve for his red card last Saturday and will line up against the Mighty Whites.  I'm afraid the football authorities just seem to get worse but not to worry I think Stephen Fry's favourite boys will the ones more worried in front of this game.  After all they will be playing a Leeds side flushed with away success after three wins on the bounce away from the Theatre of Hope.  In contrast Delia's carrot crunchers have not tasted success for 4 stuttering games so the time should be right for Leeds to   gain revenge for the disappointment of last seasons reverse at Carrow Road.  One thing guaranteed is that the atmosphere will be white hot as another sold out away allocation for Leeds adds their unique contribution to the afternoon's proceedings.  I just hope Delia's been busy making those pies this week because we'll be damn hungry by the time we've navigated our way across the flat wasteland of East Anglia.  First chant of the day?  It's got to be..............."Get your pies out for the lads"
Let's be aving you Delia!
Can't wait.
MOT
Posted by Andrew Butterwick at 19:15

I may be in the minority who actually think Bradders has something to offer, I also think many have missed a couple of points. One that Leeds want to keep him and offered him a 3yr contract, he with Howson have the most appearances for us this season. Second there seems to be a trend with the club allowing player contracts to get us into this state (remember Becks last season), also if he signs for the Blunts or Dull how can they so easily attract players over Leeds? Lastly if the rumors of interest from Prem teams Blackburn and Stoke are true what do they see in him that what seems a majority of Leeds fans don't, after all Leeds fans have such a great record discerning the calibre of players!

By the way another good blog as usual.

Chicago,
Thanks for the comments. I think the contract issue is just a factor in today's game and not a "Leeds" thing. Players agents will try to get their players the best deal and with him out of contract at the end of the season he clearly thinks this was the best strategy. I suspect he's regretting it now though.
With regards Bradder's ability I've always had a lot of time for him whilst recognising he has got limited ability. IMO he wouldn't last two minutes in the Prem and I think the stories of links to Blackburn and Stoke were more to do with contract negotiation than fact.
It will be interesting to see what happens between now and the end of Jan though.
MOT