A blanket of miserable November fog is not what you want to see when you set out on a 350 mile round trip to the "lost" city of Norwich.  But that's exactly what the Happy Chocker, Quiet One and yours truly encountered as we pointed the car down the A17 towards East Anglia. For those readers who haven't had the pleasure of travelling on the A17 you are definitely missing one of the most frustrating road trips in the entire world. The route dissects the long county of Lincolnshire with the only change in scenery being whether the fields alongside the road have got Sprouts, Cabbages or Leeks growing in them.  The road itself is for the most part single track with few places for overtaking and when a piece of dual carriageway does spring into sight it tantalisingly disappears after about 500 yards of frenetic overtaking.  Then there's the friendly local farmers on their tractors adding double enjoyment to users of the highway by depositing copious amounts of their latest ploughed field on the road together with creating a crocodile of frustrated cars behind them as they obliviously listen to Radio 2 in their air conditioned cabs. Yes the A17 would test the patience of a Saint and certainly exhausted my store of tolerance long before the "lost" city of Norwich appeared out of the ghostly gloom. Note to the highways departments of Lincolnshire and East Anglia: there is a new concept of transport infrastructure you may be interested in? http://en.wikipedia.org/wiki/Motorway 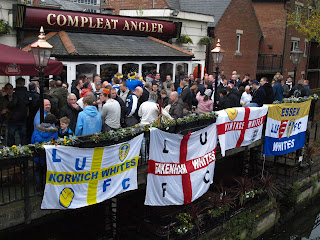 With the car safely parked we found ourselves in the Compleat Angler pub reflecting on the forthcoming game. News that Becchio was the only change from last weeks success against Bristol was understandable.  A 1.1 draw seemed to be the consensus of thinking amongst the gathered throng of Mighty Whites fanatics.  So naturally I offered a more optimistic view that we would extend our 3 match away winning run by virtue of a 3.1 victory! We left Gary, Knatterly and Liloman (Twitterwhites) in the Compleat Angler to ponder that thought and made our way to the ground.

Of course the first thing we did on arrival at the ground was to assess the famous Delia match day pies.  Well the Steak and Ale one just about past muster but I'm afraid the steak and kidney and the cauliflower cheese ones failed miserably under the harsh scrutiny of us Northern aficionados Delia.  Must try harder.  Carrow Road is always a ground that generates a good atmosphere and with 2,300 vociferous away fans lighting the blue touch paper a noisy afternoon was always guaranteed.  Before the match an ambitious Leeds fan entered the perimeter of the pitch to give the Norwich mascot a hug only to be carted off by the over officious stewards.  Just goes to prove that for the most part common sense flies out of the window when you enter a football ground.  The match began in a flurry of attacks as a Canary header tested the Leeds defence in the first  5 minutes with both Bradders and Howson causing panic in the home defence with speculative shots.  Mr Johnson's early touches were greeted with boo's from an unforgiving section of the away support. I am sorry but you don't boo your own players during a game in my opinion. End of.

Our counter attacking formation settled the quicker of the two teams and both Mad Max and Snoddy were soon taking advantage of excellent service from Killa and Howson to torment the Yellow full backs. Mad Max was turning his full back inside out every time he got the ball.  Things were looking good. Johnson was ignoring the boo boys and providing a resilient curtain of defence in front of the eager O'Brien and Bruce.  We were looking solid at the back and dangerous on the break.  All of sudden the trials and tribulations of the journey seemed a million miles away and were soon to be forgotten altogether as Mad Max put Leeds deservedly in front.  Becchio tangled with the lanky Barnett in the home defence and somehow was still able to slot the ball to our Ivorian gem.............Max jinked to the left and jinked to the right and then cracked in a stinging shot that sent the away fans into orbit.............1.0 Leeds! 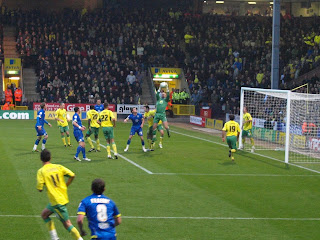 The goal ignited Leeds.  Confident, flowing football was oozing from the men in blue.  Howson was peerless in midfield whilst at the back O'Brien was a colossus with his partner in crime Bruce.  Mad Max had the beating of his man every time  he got the ball as time and again he got to the bye line and delivered teasing balls into the box.  The poor Norwich full back was having a nightmare.  On the other flank Snoddy was adding to his increasing reputation with another illusive display.  On the pitch all was going well.

Off the pitch it was not so harmonious as two Leeds fans next to me had a raging "heated debate" with each other.  The start of the conflict was a comment about Bradders being a greedy bastard to which the other responded with a comment to the effect that they're all greedy bastards and by the way they're all shit and not worth the money they are already paid! Who needs opposing fans singing "we all hate Leeds scum" when we can do it all by ourselves?  The conflict escalated to an argument over who was going to hit who first.  I tried to make them both see sense but the red mist had already descended and I might aswell have been talking Martian as they snarled insults at each other.  The stand off remarkably fizzled out without any punches thrown, bit like the Harrison/Haye fight, as one of the combatants retired to the gents for a piss!  Funny though......a young lad hugs a mascot and gets escorted out of the ground and two grown men square up to each other for at least 10 minutes and there's not a steward in sight?

Back to the match and Grant Holt was causing his usual difficulties for defenders and when Alex Bruce resorted to a more agricultural approach to stopping him Norwich were left with a dangerous free kick on the edge of the box.  The free kick fizzed through the wall but safely into Kaspers arms.  Not for the last time this afternoon did I look at HC with my teeth gritted and stomach knotted. But it was Leeds who were looking the most likely as they created good chances to double the lead.  Just after the half hour they so nearly did as Mad Max finished off a good move with a sweet shot that the home goalie skillfully tipped over the bar.  Half time came with Leeds receiving a standing ovation from their appreciative fans.  Leeds had bossed a cracking first 45 minutes and with a bit more coolness in front of goal could well have gone in 2 or 3 goals to the good. 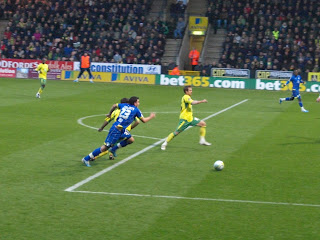 Whatever Paul Lambert put in the Norwich half time cuppa worked.  They hit Leeds with a flood of attacking football that rocked them back on their heels.  The midfield that Howson and Killa found a fertile hunting ground during the first 45 minutes was now over run by a Yellow peril as the home side poured forward.  The famously fragile Leeds back line was tested to its limit. Holt hit the post with a header with Kasper beaten as  O'Brien and Bruce tried to repel the advancing yellow tide with heads and bodies thrown in front of anything that came into the box.  On the flanks Connolly and McCartney were working overtime.  On the break Leeds were still dangerous but Mad Max seemed to  lose his way and spoilt his good creative work with less than appealing final balls.  Hoolahan and Jackson joined the fray for Norwich on the hour to add to Leeds woes as they increased the tempo of the Canaries advance. Although an equaliser had looked inevitable when it came it was cruel.  The 978th Norwich corner of the 2nd half was floated to the back post to be met by the tall Barnett who floated the ball goalwards...............but where was Kasper?............sat on his arse in the goal after been pushed over by an illegal yellow arm...........surely the ref or the linesman had seen it? Nope apparently they must have thought he just fancied a sit down. Kasper and his team mates were furious along with the enraged away following.  All the heroic defending undone by a cheat! Bollox.

Both teams now went for bust like two heavyweights slugging it out toe to toe.  Leeds were defending as if their lives depended on it and when they broke the yellow defence looked vulnerable.  Snoddy, Howson, Killa and Mad Max all found their way into the box but again the final ball agonisingly failed.  At the other end last ditch tackles and headers were the order of the day.  Kasper was proving what a good buy he was as he turned away goalbound shots with assurance.  My safety belt was strangling me as we entered the last 5 minutes.  Any neutral watching was witnessing one of the games of the season.

The nerves were jangling.  Could we snatch a winner? Could we stop another late Norwich winner?  Snoddy tried a speculative shot that just crept over the bar whilst at the other end Kasper was punching and clearing the Norwich attempts with increasing desperation.  The final whistle brought to an end a cracking game that was a credit to the championship.  On this form it's highly likely that both teams will have an interest in the end of season play off bun fight.

Andy O'Brien would be my man of the match for an outstanding defensive display closely followed by Howson and Kasper. Mad Max caused trouble every time he got the ball but his final balls got increasingly way ward as the 2nd half went on.  Overall I was happy with the point and more importantly the performance.  Leeds are looking good and battling as if their lives depend on it.  Leeds fans can't expect any more than that from the players who pull on the white shirt.

The journey home was long and tiring but the knowledge and memory of another good Leeds performance helped soothe the way.  Another away game next in the Thames valley as we take on Reading.  Can we extend our unbeaten run to 6 and firm up our position in the play off spots?  On this form I would say yes, what else?

The Championship remains a very tight league which Leeds are now more than holding their own  Life on Planet Leeds is enjoyable at the moment and the light at the end of the promotion tunnel gets ever so slightly brighter as each week goes on.  If this goes on I might need to ask you to put your sun glasses on with your safety belts! Watch this space.
Can't wait.
MOT

Posted by Andrew Butterwick at 11:07