Away days have usually been kind to us this season  Five times out of the seven trips away from LS11 have proved fruitful for the mighty whites so I was hopeful today's jaunt down the M1 to high flying Coventry would result in similar joy.  We were in car convoy as the Neighbours, Denby and Will clung on to our shirt tails as we sped southwards. The in car chatter soon focused on our chances of continuing last weeks positive showing at Scunny. Expectation was that  Bradders might possibly replace Faye in midfield and Leeds play a five man midfield again.  Justin was soon studiously organising his post match socialising in the fair borough of Pontefract via numerous phone calls with an estimated time of arrival home of 4am! Not surprisingly his plans for Sunday were less specific. 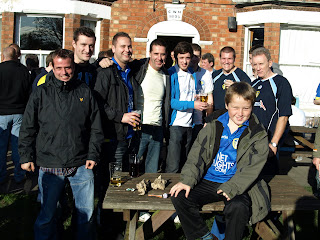 Pre Match refreshments were taken in the Black Horse, a rather "basic" pub who were advertising themselves as an away pub.  Maybe next time it might be a good idea to put more than three bar staff on when Leeds are the away team?  There was a general air of optimism about the place as Leeds' battle hardened troops sniffed the chance of a result at the home of the Sky Blues.  The half mile walk to the ground turned out to be about a mile and a half punctuated by my attempt to do a pirouette and a double pike as I slipped down a grassy bank.  As you'd expect the Happy Chocker, Quiet One and Justin were full of concern for my safety............ after they'd pissed themselves laughing!

The Ricoh Arena is one the better B&Q flat pack stadiums.  The acoustics are superb and the 6,000 plus Leeds fans were soon putting them to good use with a hearty chorus of MOT.  News that Schmeichel was celebrating the birth of his new child and missing from the team sheet was not met with universal approval by the super critical whites fans.  "He hasn't given birth ffs he could still have made the kick off" was one of the more repeatable comments I heard.  So Jason Brown, aka the Flying Pig, was between the sticks with Collins replacing Bruce at centre half.  The rest of the team was unchanged. 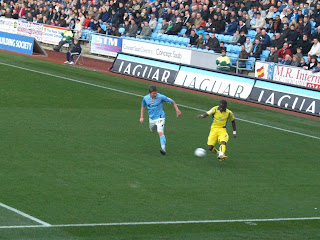 The game kicked off and it was soon clear that McSheffrey's less than complimentary comments about his time at Leeds had registered with the Leeds faithful as a catchy little ditty drifted down from the massed ranks of the Leeds faithful "You're too shit to play for Leeds"  Football is such an unforgiving game. Leeds started as they'd finished at Scunny as they pinged the ball from one side of the field to another with crisp authority forcing Coventry onto the back foot and before I could say "we look good today" we were in front.  Snoddy had already given fair warning that he was going to destroy the Coventry left flank as he ghosted into the box and put an intelligent ball back across the box inviting someone to head it in......................heeeeeere's Jonny to head it into the net in front of his ecstatic fans.  Mayhem in the stands as we celebrated another Howson header.  Get in. 1.0 Leeds and only 5 minutes gone. I do like away days! 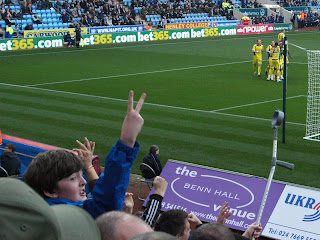 The goal shook the home side and they pushed forward to get an early response but Leeds' quick and incisive counter attacking on both flanks was paying dividends.  Mad Max was revelling in the space he was given and Snoddy was delivering a master class in the art of wing play.  Delicious!  Coventry are 4th in the table for a reason though and they put the Leeds back four under pressure as they looked to nick a goal back but bodies were flung in front of shots and the new Mr Cool, Andy O'Brien, was strutting his stuff impressively as he conducted his defensive troops effortlessly.  But Leeds looked the most likely to score again.  Howson had another Snoddy assisted header drift past the post with Westwood stranded.  Snoddy himself was flattened in the box just as he was going to head in the 2nd.  The clueless ref waved play on in that infuriating manner which means "I've just bottled a difficult decision" I was pinching myself.  2 games ago we were given a footballing lesson by the Lamb lovers from Wales and fans were calling for Lord Larry's head.  Now we were following up last weeks 4.1 triumph with another impressive display showing no little skill as the ball was kept  mainly on the deck.  Snoddy and mad Max were tormenting the home defence and it was no surprise when Snoddy nonchalantly curled a fantastic shot past the helpless Westwood. 2.0 Leeds and a roar from the Leeds end that reverberated around the stadium like a Tsunami engulfing a tiny Pacific atoll.  I like away days even more!
There was still time for a few post goal jitters at the other end before the half time whistle went to a thunderous ovation from the Leeds hordes.

Leeds were deservedly in front and looking good.  Noel Whelan was introduced on the pitch at half time by the hosts and after giving his views on the first half turned to the away end and gave a perfect Leeds salute.  That went down well.

Coventry started the 2nd period with urgency.  Marlon King was trying his best to get Coventry back in the game despite the away fans reminding him of what they think of rapists and men who knock women about (allegedly). Aidey Boothroyd had instructed his team to break quicker and inspired by Westwood's swift service pinned Leeds back. Leeds began to wobble and when a hopeful ball into the box wasn't cleared properly Coventry headed home to start the jitters amongst the away fans.  Coventry's joy was short lived as Mad Max was scythed down at the corner of the box 5 minutes later and got to his feet to slot home the penalty confidently.  3.1 Leeds and the nerves were settled.  I like away days immensely! 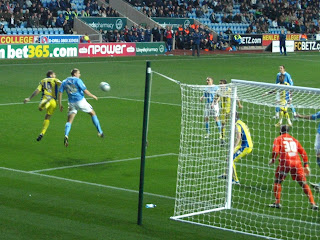 No sooner had we drunk in the joy of restoring the 2 goal margin than lethargic defending allowed a Coventry player to stab home a simple goal. 3.2 and 25 nerve jangling, heart attack inducing minutes to go. This was turning into a cracking game.  Next Becchio got free of his marker rounded the goalie only to have his shot cleared off the line.  Never has the term "end to end game" been more appropriate.  I looked at the clock, 70 minutes 38 seconds gone.  We seemed to be treading water as they surged forward.  Mad Max limped off joining Faye on the treatment bench.  Coventry had a couple of dangerous free kicks.  Surely Gary "too shit for Leeds" McSheffrey was going to plant one of them in the top corner?  But no....one went harmlessly to Brown in the goal and one ballooned away for a corner.  The clock read 70 minutes 42 seconds.  Had it stopped? A scramble in the Leeds box.......the ball bobbed around............a Coventry head nodded it goalwards............slowly Brown appeared to catch the ball just before it crossed the line.  The Happy Chocker thoughtfully revived me with the defibrillator pack we now take to Leeds games.  The clock crept ever nearer to 90 minutes and the decibel levels began to rise in the away end as we desperately urged our heroes on.  5 minutes added time went up.  Bollox!  Leeds stemmed the sky blue surge though and the joy on the players faces at the final whistle told it's own story.  This was a hard fought victory against a decent team.  Snoddy and Mad Max were the difference between the teams with Kilkenny having a peerless performance in midfield.

The walk back to the car was a long one with not much conflict with the view that the better team had won a highly entertaining game.  Much of the match was debated and discussed in the hour it took to extricate ourselves from the car park and the accident strewn M6.  Another successful away trip for the mighty whites and up into 7th place in the table.  Things are looking up all of a sudden.
Next up the Codheads...........on Tuesday night under the lights..............can we break the curse?
Can't wait.
MOT


Posted by Andrew Butterwick at 22:55