Glorious sunshine was beating down on Selby station as the Happy Chocker, Quiet One and yours truly boarded the Leeds bound train.  After Tuesday's frustrating loss at Derby and last Saturday's loss at Millwall the forthcoming game against Watford represented an ideal chance to re-ignite our play off hopes.  After all their defence had shipped nearly as many goals as we have this season but ominously their attack had knocked in an impressive 71 goals.  So there wouldn't be much money going on a goalless draw today?  But as HC correctly observed we said that about the Ipswich game and that's exactly what happened then.

The magnificent Pie and Peas in the members bar went down a treat as we pondered this vital "must win" game.  By the way this was about the 10th "must win" game we'd played this season.  Brother Chris and HC were struggling to build up much optimism for a Leeds win but I showed I had fully recovered from the emotional scars received on Tuesday by predicting a 4.2 win for the mighty whites!  The team news contained a surprise as Davide Somma was preferred to Becchio as the lone striker.  McCartney, Johnson and Snoddy all returned to the starting line up.  The question on most peoples lips was "Is Becchio injured?"  It was a bold move to play our super sub Somma up front by himself.  Presumably the plan was to keep the ball on the floor? 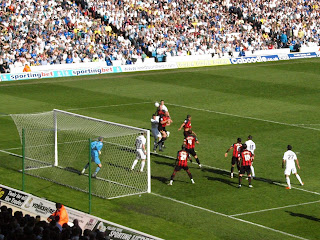 A 31,000 crowd basked in the West Yorkshire sunshine as the game got underway.  With Watford lurking threateningly in the pack of teams chasing Leeds' 6th spot nothing more than a win today would do.  What we needed in the first ten minutes was Leeds to build up a head of steam and fire up the expectant home crowd but much as they tried promising moves seem to flounder on the rocks of too many misplaced passes.  The team was tense and nervy and so was the crowd.  The crowd's nerves were tested on 15 minutes when Andy O'Brien fired in a back pass to Kasper at such a speed that it produced the best stop of the match so far. My head found itself firmly in the clasp of my hands as Leeds struggled to gain any sort of momentum in a game that the visitors were more than happy to sit back and soak up pressure before releasing the impressive Danny Graham on the counter.  Our inability to break them down allowed a certain amount of desperation to creep into the our passing.  Mad Max did find an inch of space in the box only to have his shot blocked and then Howson so nearly finished off a superb Snoddy and Lichaj move only to be denied by a desperate block from Deeney.  Hopes were raised.  HC suggested that this just might be 0.0 after all?

At the other end Kasper had to be alert as Watford looked dangerous on the break but as the half stuttered to a close it was Leeds who increased their chance count as Mad Max rattled the bar with the goal yawning wide open in front of him then he so nearly atoned for the miss with a looping header just on half time.  This wasn't the best 45 minutes of football seen at Elland Road by a long chalk.  The Urinal philosophers gave it short shrift in the half time gents debate. "Rubbish" "Shite" "Poor" were the more eloquent descriptions of the performance.  We Yorkshireman are men of few words when things aren't going right! 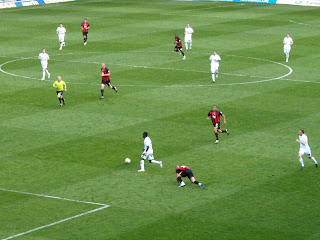 The team were sent out early for the 2nd half presumably with a flea in their ear from Lord Larry.  The start wasn't inspiring as Killa launched the kick off straight into the West Stand.  "Still think it's got nil nil written all over it" HC offered.  The longer the game went on the more he seemed to be correct. After our less than auspicious  showing at Derby this wasn't much better.  Somma was struggling to make any impact against the beefy Watford centre backs, the midfield trio were struggling to break down the deep visiting defence and the crowd was getting more and more tetchy.  O'Brien and Kasper looked at each other as a long ball bounced between them before AOB needlessly launched the ball into the East stand.  If any one incident summed up our defensive failings that was it.  No communication followed by blind panic.

Lord Larry had obviously seen enough and on 56 minutes Becchio came on for Killa as we changed to a 4.4.2 formation.  Immediately Luciano won a ball in the air and lifted the crowd.  Surely Becchio can save the day and show everyone why he shouldn't have been dropped?  But just as I was thinking we can win this game my hopes were once again lowered as Graham found space far too easily and swung a lovely cross which was headed onto a post and back into Kapser's arms.  Whatever HC thought this game wasn't going to stay goaless! 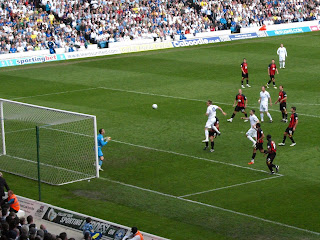 And it didn't.  Leeds won a free kick on the right.  Bannan, on for Somma, floated a pin point ball right onto Becchio's head and the ball flew straight into the net. 31,000 voices of sheer relief roared and Leeds were 1.0 up.  A fan ran onto the field to mob Becchio but his very well filled frame was soon dragged off the scorer by the stewards.  6 stewards then tried unsuccessfully to escort him off the pitch until in the end he was dragged away still trying to give the Leeds salute to the kop. Suddenly fans were checking how Millwall, Hull and the other teams around us were doing.  It was game on.  Roared on with new hope Leeds should have killed the game off as Bradders deft flick in the box left Becchio with the goal at his mercy just 10 yards out....................goooooal.............but no the ball ballooned into the kop.

As they have done many times before this season Leeds then conceded a very soft goal.  A deep ball to the far post found the Watford full back unmarked with Kasper already hesitating in goal he was able to drop a simple header into the net.  Triple Bollox.  We'd done it again.  And as Homer Simpson would say "It just gets worse and worse" a few minutes later as Leeds had at least two chances to tackle or block the ball in their box but allowed Graham to cross the ball to Weimann who had a simple side foot to put the ecstatic Watford team 2.1 up with just 4 minutes to go.  The defending was simply awful.  A sick and nauseous feeling overcame me.  Our season was just fading away in embarrassing fashion.

But no sooner had the Watford fans finsihed celebrating their unlikely lead Leeds drew level with as good an own goal you are likely to see as a teasing corner from Bannan was hammered home by an unfortunate Watford defender.  Cheers mate!  This then set up a frantic last 5 minutes as Leeds poured forward to try and snatch a winner without the injured Becchio. Snoddy turned his full back inside out and crossed only for a Watford arm to stop the ball....... PENALTY........we all shouted. 31,000 fans saw it but one referee and two linesman didn't.  The final whistle was blown with the ball out of play. 2.2 and once again disappointment.

Although we had drawn it felt like a defeat to me.  We didn't play well today against a team who seemed to be content with a draw for most of the match.  If you didn't know that both teams had play off aspirations you could have been mistaken for thinking this was meaningless end of season game............but it wasn't.  Leeds have lost their way just at the wrong time but astonishingly remain in 6th spot.

The trek back to the station was muted as fans grudgingly took in the other results.  The Blunts demise against PNE was greeted with smiles as that almost certainly condemns them to relegation.  I wonder if the Bramall Lane PA man remembers what he said to the Leeds fans at the end of our game? Well you won't be seeing us next year unless it's in one of the cups thank you very much.  Enjoy your trips to Chesterfield, Yeovil et al.  Just 4 games of the regular season left now.  Can we hang on to a play off spot? It is possible but I think unlikely on this form.  Two wins next weekend would change that though. Come on Leeds let's have one final effort.
Can't wait.
MOT

Posted by Andrew Butterwick at 20:01

Good write up that mate, as you say it seemed to be a penalty, but I disagree about us getting in the playoffs, 4 wins and we are in the po's.

Boshhunmanby,
thanks for the comments. Don't get me wrong I'd love us to get to the PO's but 1 point out of the last 9 available has dented my confidence.
MOT