By any stretch of the imagination this is a massive weekend in the history of Leeds United.  Despite our faltering and frustrating form, despite an injury to the redoubtable Mr Becchio and despite the well founded doubts of most fans we enter the critical Easter period occupying the final play off spot.  With four games of the regular season left all we have to do, with the benefit of a two point advantage, is to claim more points than the five teams below us on the run in. Sounds simple and the prize would be a chance to roll the dice in the play off lottery with the golden ticket of a place in the Premier League awaiting the successful team.  The reality of Leeds' position is difficult to comprehend given that this time last year we weren't even sure we would escape our sentence in League One but thanks to Beckford's late jailbreaker against Bristol Rovers we took our place in the ultra competitive Championship.  So it's time to clear our collective heads and focus on what we now hope is a 7 game season ending with a £60m game at Wembley. 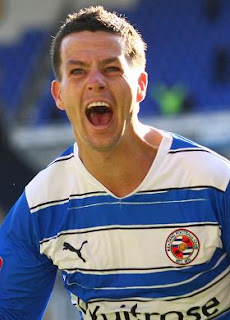 First up is a test against the high flying Royals on Good Friday before we attempt to storm the Palace on Easter Monday at Selhurst Park.  On a weekend when the Christian world celebrate the belief that Jesus Christ was raised from the dead what better time to resurrect Leeds' promotion hopes?  To do that we will have to end Reading's phenomenal  8 game winning streak that has seen them cruise into the play off places on the back of some impressive and speedy counter attacking play.  In simple terms we will need to score three goals because for all the huffing and puffing that has come out of Elland Road regarding the defence we are still shipping two goals a game. Talking of defence I suspect I won't be the only Leeds fan eyeing the Reading centre half, Mr Harte, enviously as the new member of the PFA championship team of the year parades his skills on the same Elland Road pitch where he made his name.  He clearly has fond memories of his stay in Beeston as he has declared he won't be celebrating if he scores a trademark free kick against his one time employers. Top man!

We are more than capable of scoring three goals though even if Luciano doesn't recover from his hamstring injury but to do that Gradel, Snoddy and Howson will need to be at the top of their game and we will need a distinct increase in the creativity coming out of whatever midfield partnership starts the game.  All in all this has the feel of the ultimate "must win" cup final game because anything less than a win will surely shunt us out of the play off spot and with just three games remaining it will be very hard to regain the momentum. Just ask Rory Mcllroy.  I would like to think that we still have some good performances left in us? After all we are not in the top six for nothing are we?  So with a packed Theatre of Hope urging the mighty whites forward and the possibility of a crack at the play off's up for grabs it is more than possible that the Royals' winning run will come to a grinding halt in the cauldron of a seething Elland Road.

"and the lord said unto Simon the disciple have faith, believe in your destiny, strengthen your defence and you will lead your people back to the promised land" (Andrew 3/1/11)
Amen.
Can't wait.
MOT
Posted by Andrew Butterwick at 20:15