The sun was shining brightly as we sped down the A1 towards Peterborough for the high noon clash with the "Son of the Devil's" charges at London Road.  The Happy Chocker, the Quiet One and Aidey White (No not that one) were on board and cautiously optimistic of extending our current six match unbeaten League run.  HC had already hammered his Skybet account with bets on a 3.2 Leeds win with various first goal scorer punts ranging from Danny Pugh through to Ross Mac.  Mmmm...... our recent dallying with those illusive clean sheets didn't seem to figure in anybody's calculations. Not surprising with the Posh's penchant for knocking goals in, especially at home, and Rachubka's Tuesday night howler still fresh in everyone's minds.

Pre match refreshment was taken in the packed Drapers Arms near the train station.  It appeared that the early morning start had given everyone a raging thirst as I struggled through the throng to get to the bar.    The clock showed 9.50am but Liloman had already slated his thirst numerous times!  With Peterborough occupying 7th spot and ourselves in 11th position the fact that a win for either team would propel them into at least joint 2nd place showed just how tight the league is at this early stage of the season.  Suitably refreshed we made our way through town to the ground.  Peterborough's London Road ground is stuck in a time warp somewhere between 1953 and 1970 with their old fashioned turnstiles, proper terracing, minute toilets and an even smaller refreshment bar.  When I ventured in for a Steak Pie it was ram jammed with 4 fans jostling for position.  The Pie was very, very good though!  We were in the Posh seats whilst the vast majority of the travelling army were on the terraces behind the goal.  Just like the old days!

News that Snoddy wasn't fit dampened the spirit somewhat with Lord Larry giving a debut to Vayrenen on the right flank.  The matched kicked off with us squinting into the bright sunshine and the Leeds fans reminding the Peterborough manager how much they liked his Dad and his offspring.  Leeds needed a positive start after the agony of Tuesday's last minute goal and hit Posh with a robust opening.  Clayton, who spent time on loan at Posh last season, was straight into the groove directing operations with confidence.  Both teams utilised the excellent playing surface well in the opening exchanges but it was the men in black who struck first.  Clayton clipped the ball towards Keogh who turned and volleyed a screamer into the Posh net.  1.0 Leeds and the quiet home crowd went even quieter.  Peterborough are a passing side and they soon countered Leeds' attacking efforts with their own fluid attacks.  Chances fell to Tomlin and Sinclair as the home side gave their fans hope.  "Can't see there being just one goal in this" I commented to HC. 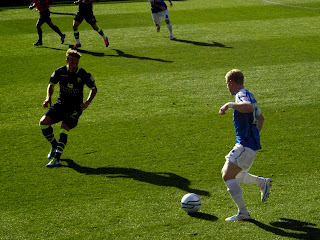 Ross Mac got clear of his marker and tested the Posh goalie with a shot that drifted wide but this see saw match was about to swing towards the men in blue.  A corner swung to the back post was nodded in easily by the big centre half Zakuani. Hesitancy by Rachubka and his back four were a contributory factor for this one.  "How long is Lonergan out for?" the man behind me enquired.  The game then swung one way then the other.  Keogh broke free with another intelligent run but has shot was smothered by Jones in the home goal as Leeds looked good for another goal.  As the clocked ticked to 40 minutes the pendulum swung very much Leeds way.  Tomlin, the excitable home striker, clumsily hacked down Keogh from behind.  The ref had no hesitation as he reached for his red card and despatched the complaining offender for an early bath.  Like Father, like son Mr Ferguson was berating the 4th official on the touchline.  Presumably for his role in not pointing out to his colleague that Keogh had actually deliberately smashed his calf violently into Tomlin's boot.

The ref was at risk of losing control of the game as he insisted players left the field if they had a speck of blood on their person.  White and then Vayrenen disappeared in quick succession but when Posh's Boyd had to go off the Son of the Devil ensured that suitable time wasting by his other players meant that Boyd didn't actually miss any play.  Half time came with tension and fraught tempers on both sides.  Still we were level and now playing against 10 men.  Should be easy shouldn't it? Especially as Posh made it clear they were going to "park the bus" to try and hold what they had. 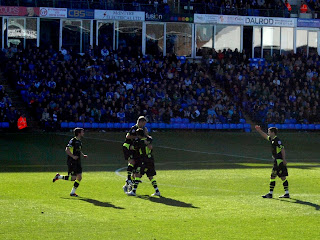 Leeds response to the wall of blue was to play a patient passing game waiting for a chance to be created but this wasn't universally appreciated by the demanding fans around me.  "Get it forrad" was the general cry as Clayton, Pugh, Howson and Connollly played lots of lateral balls to try and unlock the resolute home defence.  I was suggesting that Lord Larry should sacrifice Connolly and bring Becchio onto try and batter the blue wall down when the subs board went up.  Vayrenen came of in favour of the more attacking style of Sam.  Just shows how much I know.  Leeds patient play paid off after 53 minutes though.  The ball swung from one side  to another.............Sam found space in the box and teed up Clayton.............who rifled the ball past Jones...............Gooooooooooooooooooooooooooal Leeds. 2.1 against ten men.  This should be easy shouldn't it?

The Son of the Devil changed his team and formation and attacked Leeds in search of an equaliser.  This gave Leeds more opportunities to hit Posh on the break but they failed to capitalise as the men in blue began to look more threatening as each minute ticked away.  That sickening feeling that comes with the knowledge that Leeds were trying to defend a slender one goal lead sunk to the pit of my stomach.  Boyd was dancing about between the midfield and the Leeds back four and causing havoc.  I looked at my watch for 978th time in the last ten minutes and it showed there was still 5 minutes to go.  This was agony.  Lord Larry then made another strange substitution.  At a time we needed to close the game out he brought on Nunez for Ross Mac?  Now Nunez, bless his cotton socks, is good going forward but not renowned for digging in and keeping possession.  So why bring him on?  As he attempted and ambitious step over and lost the ball a minute later my worries were vindicated.  Posh went down field and launched yet another last ditch attack.  The ball swung aimlessly into the box................somehow Rachubka and the defence had another session of "after you, no after you" and allowed Little to poke the ball home. Unfuckingbelievable!  The home fans were ecstatic as the same gut wrenching silence descended on the Leeds fans that engulfed them in the 93rd minute on Tuesday night.  "You're 3.2 bet's still on" I hopefully suggested to HC.  His face didn't move. 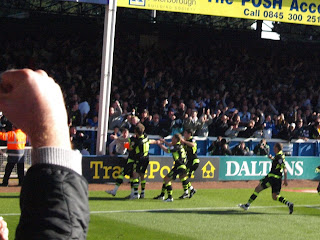 The four minutes of added time were up as Leeds got a free kick 30 yards out.  Clayton took it short to Nunez who jinked inside and curled a teasing ball into the box...............Posh failed to clear properly and O'Dea pounced with his long left foot guiding the ball goalwards onto the bar and just behind the goal line. Becchio followed in and headed home but the ref had already given the goal.  The terraces behind the goal moved like a human sea as the Leeds fans celebrated a victory snatched from the jaws of a draw.  Unfuckingbelievable and HC had won his bet.  The whistle went almost immediately to signal a 3.2 win for Leeds.  Phew!  With finishes like this watching Leeds United needs to come with a public health warning.  Not for those of a nervous disposition!

So Leeds crept up to third in the table before the other games kicked off.  What a fantastic finish to an absorbing game.  Keogh was man of the match for me.  He has added a complete new dimension to Leeds play with his skillful running and ball control.  His goal was top class.  Worried about the goalie position after a second hesitant display by Rachubka but satisfied to come away from a difficult venue with all three points.

Leeds Utd never do easy and today was a classic example.  As the fans streamed away from the ground I heard one old fan comment to his son "Nah it's never boring son watching Leeds, never boring" I think that's possibly the understatement of the day!  Brum on Wed and another tough test.  Note to self......remember to take heart attack pills on Wed!  Don't you just love Leeds?
Can't wait.
MOT

Posted by Andrew Butterwick at 18:52