Let's face it Wednesday night was not a good night for Leeds United Football club.  To lose at home is bad enough but to ship 5 goals without reply is embarrassing with a capital E.  The defeat finished off an 8 day period in which we had gained a single miserly point from a possible nine available.  Compare that to the previous unbeaten run of seven games where we gratefully amassed seventeen points from the twenty one available.  So is this a blip or the start of a downward spiral back to the scary end of the table?  To read the various message boards and listen to the radio phone ins the downward spiral theory is the favoured conclusion.  So are the all the doom and gloomers correct? 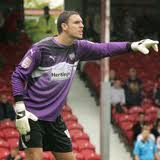 Paul Rachubka has certainly had a major impact for all the wrong reasons on the team since his forced introduction at Doncaster after Lonners departed with a sore finger.  I still can't get over his performance in the first half against Blackpool.  Never has one person caused so much damage to his team in 30 minutes as Mr Rachubka did on Wednesday.  And I'm not just talking professional football.  If he was playing for The Dog & Duck on a Sunday morning and he gave the opposition 3 goals and got his own star defender sent off inside thirty minutes he would have been chased off the pitch by his own players.  Either that or somebody would have slotted him!  Lord Larry should take the hit for this though.  He brought him in from Blackpool because he presumably saw him as better stand in keeper than Shane Higgs?  Even before Wednesday he'd given plenty of indications against Coventry, Posh, Brum and to a lesser extent against Cardiff that he was a car crash waiting to happen but did we scour the loan market for a short term replacement? No.  Now Lord Larry has had to go cap in hand for an emergency replacement or call up Ethel the Tea Lady to stand in!  No Mr Grayson this hasn't been your finest hour in the annals of football management by a long chalk.  News that we have now captured Reading's back up goalie, Alex McCarthy, will at least settle a few concerns amongst the battle hardened Leeds fans.  He is an England under 21 international so he must be a reasonable shot stopper but his loan career up to press is far from illustrious with spells at Team Bath, Woking, Aldershot, Cambridge United, Yeovil Town and Brentford on his CV! Beggars can't be choosers though.

There was a rich irony in Capt Birdseye's programme notes on Wednesday night as he crowed about the problems Leicester City have had even though they had splashed the cash over the summer in comparison to Leeds' more frugal approach.  The point the bearded one was trying to make with his usual literary sledgehammer was "Aren't we clever we don't need to spend silly money bringing good players in.  We manage comfortably with shrewd signings that are just as good"  Yes.................................. just like Paul Rachubka I presume? 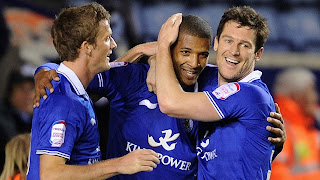 And so to Sunday's match at Leicester City.  Murphy's law of Football dictates that Mr Beckford will definitely score and Schmeichel will have his best game yet for the Foxes as they return to play against their former employers.  Add to that the possibility of the blues being lifted by the "New Manager" impetus a club naturally gets on the appointment of a new boss and the fact that O'Dea and Lees will both be missing from the Leeds back four things are looking a tad bleak.  O'Brien and Bruce up against Beckford..............the very thought of it brings me out in a cold sweat!    A point is the best we can hope for with this one it would seem.  A backs to the wall performance needed from the mighty whites cheered on by another massive travelling army.

Anything's possible in this league though. Dare we hope for a 3.2 win?  Everything crossed and seat belts fastened we're going through some mid season turbulence.  Hang on in there because it's not like we've not experienced this before is it?  We are Leeds after all.
Can't wait.
MOT
Posted by Andrew Butterwick at 19:55