The clear blue sky put a spring in my step as I made my way to York station for the trip to the newly named King Power Stadium, home of Leicester City.  As usual the Happy Chocker and the Quiet One were accompanying me as we threaded our way through the cross country rail network towards Leicester.  To say we were all a bit apprehensive is an understatement after all memories of the midweek humiliation at the hands of the Tangerines was still far too fresh in our minds.  Alex McCarthy had arrived from Reading to shore up the goalkeeping slot but has he got enough experience to play at this level we wondered.................and then there was the delicate subject of who was going to step into Tom Lees boots at centre half?  O'Brien? Bruce? Bromby? None of them were that much of an inspiring prospect especially if they had to face the pace of a certain Mr Beckford.  Despite all of the apparent problems Leeds were burdened with I still hesitantly went for a 2.1 Leeds win along with the Quiet One.  HC was not convinced as he hedged his potential disappointment with a bet on a 3.1 win for the Foxes.

At Sheffield two Leicester fans joined the train.  For some reason I christened them Pinky and Perky as they chattered away about the prospects for the forthcoming game.  "Beckfords shite and you can have him back" young Pinky shouted.  "Well he did score 85 goals for Leeds so he must have done something right" I suggested.  "No he couldn't hit a barn door from 8 yards and he's lazy" young Pinky confidently stated with the older Perky nodding incessantly in the background.  "Well Sven must have thought different or he wouldn't have paid £2.5m for him" I said unsuccessfully trying not to laugh.  They then launched into a duet about how crap Sven was as a manager and how they're doing quite nicely without a leader at the helm.  Mmmm maybe, maybe not I thought.  Thankfully Leicester station came into sight to save us from more of the gospel according to Pinky and Perky. 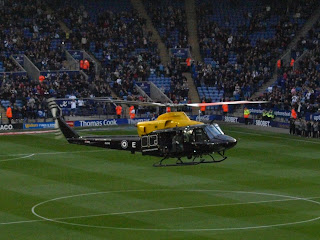 After pre match refreshments in The Hind public house we joined the stream of fans heading for the ground. 3,300 Leeds fans had made the trip and as ever they were in good voice.  Leicester had laid on some impressive Remembrance day tributes starting with a Royal Navy helicoptor delivering the match ball followed by a poignant rendition of the last post before the game got underway.  Andy O'Brien started alongside Kissy at the back with the new recruit, Alex McCarthy, between the sticks. One thing struck me straight away and that is Alex is not a small lad.  His huge frame filled the goal.  Talking of huge frames but this time with a lot more padding on Leicester's drummer boy was once again banging his drum to try and enthuse the home fans.  He certainly hadn't lost any weight since we were last here!  Jermaine Beckford got a rousing chorus of the song about his goal at the Scum shit hole as he took his seat on the subs bench to which he acknowledged warmly. 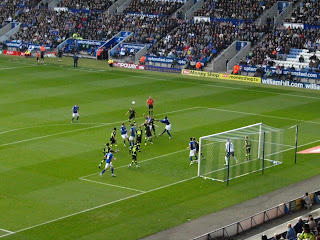 Leeds started well with the back four looking rock solid.  Maybe the knowledge they had a goalie who could catch a ball and not parry shots to the opposing striker helped?  Snoddy tested Kasper Schmeichel early on with a weak shot whilst at the other end the giant McCarthy had to tip a cross cum shot over the bar.  It was Leeds who were looking the more dangerous in a very tight opening twenty minutes.  Ross Mac was incensed when he appeared to be pulled down in the box as he attempted a header on goal after another Leeds attack.  Danny Pugh combined with White to make an opening but his right footed shot just went the wrong side of Schmiechel's post.  30 minutes gone and this already had the look of a very tight game.  Leicester had Steve Howard up front and whilst he was constantly making a nuisance of himself Kissy was dealing with his threat effectively.  Maybe this wasn't going to be too painful after all?

As the game neared half time the game became more of a stalemate with both teams cancelling each other out.  Alex McCarthy must have been slightly frustrated as the only "save" he had to make was the simple tip over the top from the cross cum shot.  But he did catch any balls that came his way very well!  Leeds had edged the first 45 minutes as they trooped off for their half time oranges.  The half time parade of serviceman and veterans was quite moving.  The Leeds fans struck up an impomptu chorus of Rule Britannia as the parade passed the away end.  An old veteran draped in a Union jack and bedecked with medals stopped and saluted.  Classic! 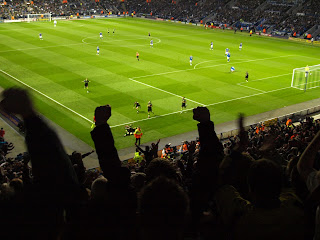 The 2nd half continued as the first half had finished with the game very finely balanced.  Leeds did look to have the more potent attack though.  Keogh so nearly made Mr Schmiechel pay for an awful clearance that went straight to him but his attempted 40 yard return never threatened the Dane's goal.  Snoddy jinked down the right and crossed for Ross Mac who again appeared to be dragged to the ground just as he was about to pull the trigger.  The game needed a goal to lift it out of the tense attritional warfare it had drifted into.  When it came it was straight out of the top drawer.  Adam Clayton latched onto a ball some 25 yards out and arrowed an unstoppable Exocet past Schmiechel right into the top corner of the net. The away end erupted with joy as the Leeds players celebrated a well deserved lead in front of their adoring fans.  1.0 Leeds.

Twenty minutes remained.  Plenty of time for nail biting as we swung from going for a 2nd killer goal to defending desperately to protect the precious lead.  Becchio replaced Keogh.  Leeds had chances to hit Leicester on the break as they pushed on for an equaliser but the 2nd goal didn't materialise.  At the other end the introduction of Beckford added some much needed pace to the home attack and he so nearly silenced his East Midlands critics as he cut inside Connolly and beat McCarthy with a shot that Kissy hoofed off the line magnificently.  The ref blew his whistle to signal another Leeds away win.  "1.0 and we've spent fuck all" the Leeds fans taunted the disappearing home fans who might now be thinking they do need a manager.  Leeds deserved to win if only because they offered more threat going forward and the quality of Clayton's sublime winning strike.  Man of the Match was a toss up between Kissy and Clayton.  Kissy won anything that went near him in the air and even though the Leeds defence retreated far too deep in the last ten minutes the clean sheet was very, very welcome.

The journey home was a good one safe in the knowledge that we had bounced back from that Blackpool game in some style.  AOB had a good game which surprised a lot of people not least me.  I don't know why we were so apprehensive!  Another international break next weekend so it's Burnley away a week on Saturday and already looking forward to sampling the delights of Burnley Cricket club's pre match fare before seeing another Johnny Howson show?  I do hope so.  Hope springs eternal on Planet Leeds once again and we will travel to the home of Alistair Campbell's favourites in good heart.  Suddenly all's well with the world again.
Can't wait!
MOT


Posted by Andrew Butterwick at 23:45

I would like to get in contact with you regarding something LUFC based. Would you please reply with your email address so I can drop you a message.

I know this may come across as spam, but its not. Ask a Leeds based question and I will answer it :)