Profits up, wage budget down. The crazy world of Leeds United. 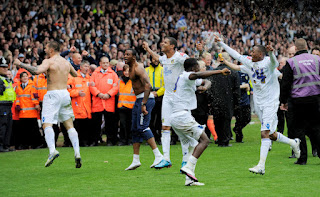 Financial accounts don't usually make exciting reading ............that is unless the accounts are for Leeds United and the convoluted web of company's that control our beloved club.  On the face of it posting a healthy profit of £3.5m from an increased turnover of 19% up to £32.6m is good news (year ending June 2011).  Especially when you cast your eyes round the rest of the Football world and still see clubs falling into the economic abyss.  So why won't Leeds fans be dancing in the streets at the news?  Clearly the sore point of finding the funding for the East Stand development, £2.5m of the £7.5m needed came from club funds, will stick in the throats of fans who want to see money spent on a better quality of player. The benefit of promotion from League 1 is clear to see with an extra £3.9m of central funding winging its way to Elland Road as a result of Beckford's late winner against Bristol Rovers.

All interesting stuff but hang on a minute..................."First team squad & management costs were £11.6m increasing from £7.7m in the previous period"  Mmmm so in June 2011 the players wages bill was £11m?  Surely that must me wrong because Capt Birdseye was berating Lord Larry for being £2m over his wage budget of £9m in his programme notes in December 2011. So let me get this right...........we just miss out on the play off's in our first season back in the Championship so we cut the wage budget for the following season by 18% (£11m down to £9m) and then sack the manager for not making the best use of his resources?  Doesn't smack of much ambition or intention to get back to the Premier League does it? Quelle surprise!

Back to matters football and once again tragedy has reared it's ugly head this week with news that Stillyan Petrov has acute Leukaemia. Our heartfelt thoughts go out to the Aston Villa captain and his family.  On Planet Leeds I am still working on the basis that a team that can lose 5.0 (Blackpool), 4.1 (Birmingham) and 7.3 (Forest) at home can't possibly reach the play offs but quite a number of teams are conspiring to prove me wrong as once again the vast majority of this weeks results favoured Leeds and leave us a tantalising five points adrift of the play offs with seven games to play.  More interestingly seven points separate seven teams chasing 3 play off places before today's matches kick off. Off those seven teams we still have Blackpool and Cardiff to play along with Reading. So near yet so far away?

Watford are today's visitors to the Theatre of Renewed Hope bringing with them an unbeaten record during March.  On their recent form they will be difficult to beat and devoid of any relegation or realistic play off expectations will be approach the game in a relaxed manner..........a truly dangerous mixture especially if they  quiten the Leeds crowd in the first twenty minutes. As for Leeds which team will turn up?  The bumbling embarrassment that faced Forest or Warnock's warriors who slayed the Lions at Millwall? It's anybody's guess but suffice to say only three points will do from Saint Neil's men.  As ever with following the mighty whites life is never dull. A clean sheet at home would be nice if only to prove we can do it!