28 years of Welsh hurt was on the line for today's game against the bluebirds (who are now red) of Cardiff.  Leeds' hopes of ending the 28 year winning drought in the principality had already been dealt a blow with injuries to Green, Norris and Michael Brown depleting their already thin squad.  So I was looking at the trip as one in hope rather than expectation as I left the house bright and early for the 230 mile slog to the home of Male voice choirs, numerous valleys and Charlotte Church.  Disaster struck before I even got the faithful Scirocco off the drive.  The back tyre was as flat as a pancake.  Bollox!  Was this a sign of the day to come? 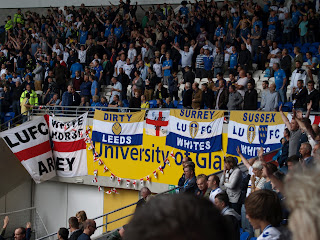 The Happy Chocker's car solved the transport problem and we were soon on our way picking Liloman up in Leeds before heading south.  Who would start in midfield? Tonge, Sam Byram or even Zac Thompson's name was mentioned as potential partners for Austin the Beast in the centre of the park.  I favoured young Byram in the centre.  Confirmation of the difficulty of Leeds' task was gained at Strensham services as the great Eddie Gray responded to my question on his thoughts on the forthcoming game "tough, very tough" was his succinct reply as he rushed to join Jonny Buchanan clutching an expensive service station sandwich.  Oh the glamour of these media stars!

Cardiff is one of the better stadiums we visit despite the stupid ticket collection arrangements. The catering facilities are adequate if not expensive (£3.50 for a pasty) and the gathered Mighty whites family were soon in good voice.  Tonge had made the starting line up with Byram and Aidey White out wide.  Ross Mac got a warm reception from the home fans as the game kicked off.  Cardiff in their red imitation Wrexham shirts looked slightly odd.  Can't imagine there's too many Cardiff fans enamoured with their newly branded kit and badge? If Leeds fans were apprehensive about the game before the start that changed to pessimistic after just four minutes as Ross Mac went off with a serious injury.  He was clearly in distress with what looked like an ankle injury as he was stretchered from the pitch.  Now it really was going to be a backs to the wall game. Varney came on for the Scot. The game started scrappy and continued in that vain for most of the first half.  Chances were at a premium.  Paddy dealt comfortably with any shots that scurried his way whilst at the other end Leeds struggled to carve any decent chances although Austin fizzed a header wide from a corner.  The travelling 1800 Leeds fans were making most of the noise in a strangely subdued atmosphere as the lack of quality on display on the field numbed the senses of a lot of fans.  The half time dash for the gents and bar started after just 35 minutes.  Just before half time Cardiff should have been in front as Helguson wasted a clear chance by heading over from 6 yards out.  Half time 0.0 and I subdued a pesky yawn that was trying to escape!

Diouf replaced Drury as White reverted to left back with Varney dropping wide and Diouf playing alongside Becchio.  Was Drury injured or was it just tactical?  The home side began to gain the upper hand as they attacked the Leeds flanks with some success.  Pearce and Lees were looking solid in the heart of the Leeds defence though and behind them Kenny was revelling in the taunts from the Cardiff fans.  The momentum was with the Redbirds though as Mutch and Hudson both tested our tubby little goalie.  At the other end Varney found space and drilled a tempting ball across the Cardiff box but frustratingly nobody could connect.  Soon after Diouf found space to volley goalwards but the referee had already blown for an infringement.  If the first half had 0.0 written all over it the 2nd was definitely suggesting goals were just around the corner.  On 63 minutes Malkie McKay made a decisive substitution as Craig Bellamy replaced Noone to a hero's reception.  "Mmmm this is just like the Thierry Henry moment at Arsenal in the cup" I moaned to HC.  And sure enough it was the same result.  Just like Arsene's favourite forward Bellamy was only on the pitch three minues before he'd broken the deadlock.  Cardiff got a dubious free kick on the edge of the box and the whinging welshman struck a superb free kick beyond Paddy into the net.  Now the home fans woke up as they celebrated their favourite son's goal. 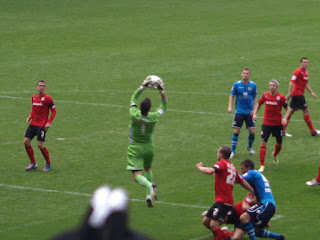 Five minutes later and Leeds were down and out.  Lees was adjudged to have pushed Maynard in the box and Whittingham slotted home the penalty.  Wow the Cardiff fans can sing!  For the second game running Leeds found themselves 2.0 down and started a belated fight back.  Caution was discarded as Leeds pushed forward.  Varney, who was having a lively game, cut inside from the wing and was bundled over.  Free kick 30 yards out.  Austin lined up the kick like a professional assassin adjusting the sights on his rifle before unleashing a thunderbolt shot that caught Marshall unawares.  Get in. 2.1 and still 15 minutes to go.

Leeds tried one final push but were thwarted by some classic timewasting and play acting from Cardiff and also a distinct lack of creative guile to open up a resolute home defence.  Peltier had a golden chance to steal an unlikely point though but headed wastefully over the bar.  It finished 2.1 to Cardiff.

Pearce and Kenny were stand out players for Leeds.  Tonge had a steady debut but understandably tired towards the end.  Byram had another good game as did Austin.  In the end Eddie Gray was correct in saying it would be a tough, tough game and the 28 year winless drought in Cardiff will stretch to at least 29.  This was not a classic game but did spring to life once a certain Mr Bellamy arrived on the pitch.  Just the sort of quality Leeds are lacking at the moment.

The long journey home was accompanied by radio debates about handshakes and the usual phone in stars talking absolute bollox.  The car soon fell silent as everyone but the driver went to the land of nod.  I do like away days but sometimes it's an awful long way home......especially when we've lost!  The Codheads up next at Elland Road fresh from thumping Millwall.  Another tough game Eddie?  You bet.

Posted by Andrew Butterwick at 23:58