Diouf chews up the Toffeeman and spits them out of the Cup!

The monsoon like weather that swamped the country was relentless as we parked the car and walked down Elland Road. The combination of the rain and the floodlights always adds a certain something to night matches and tonight was no exception.  It was cup football though and there was the whiff of hopeful expectation in the air despite Leeds facing an Everton side who are taking the Premier League by storm.  Surely we had no right to expect anything out of this game had we?  Well with my sensible head on the answer was definitely no so I swapped it for my romantic, optimistic head and laid a a bet on a Leeds 2.1 win at 11/1.  Daughter Sarah had joined the Happy Chocker and the Quiet One to experience her first game of the season.

David Moyes picked a strong team despite making 6 changes to the side that demolished Swansea at the weekend.  The bushy haired Fellaini started in midfield with man mountain Distin at the heart of their defence and Anchebe, or as HC referred to him Anchovies, leading the line.  Leeds had Peltier, Kenny and Drury missing from their line up allowing Ashdown, Pugh and Brown to replace them.  Byram went to full back and Aidey White filled in at right midfield.  Tonge was on the left leaving a centre midfield pairing of Austin and Brown that had a slightly combative look about it.  A very disappointing crowd of 21,000 (5,000 from Everton) were inside ER at kick off as the rain continued its persistent deluge of West Yorkshire.  Credit to the groundsman as the pitch looked to be in perfect condition despite the amount of rain it had endured. 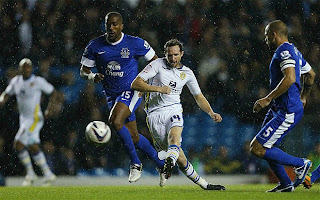 Even though the stadium was only half full the atmosphere was electric as the game got under way.  Straight away Mr Warnock's tactics were plain for all to see.  Press, press and then press again and don't let their aristocratic visitors a minute on the ball.  Leeds exploded out the blocks like a typhoon force and rocked Everton onto the back foot.  Two early free kicks in dangerous positions gave the Merseysiders notice of Leeds intent.  They might not have a full strength side but Leeds weren't going to roll over for the Premier League stars.  4 minutes had ticked by when the roof came off the soggy stadium.  First the peerless Austin won the ball in the centre circle and White picked up the ball............he switched on his turbo charger and swept past two blue shirted defenders towards the edge of the box before dropping his shoulder and curling a vicious shot into the top corner of the net.  1.0 Leeds and suddenly the soggy journey to the ground was forgotten as Leeds fans celebrated in wild disbelief.  This can't be the same Leeds team that put up such a disappointing show against Hull just 7 days ago?

The goal acted like a double dose of adrenaline through the veins of the Leeds players as they tore into the Bluenoses.  As 11 minutes of "Oh Gary, Gary,......... Gary, Gary, Gary, Gary, Gary Speed" rang round the ground Leeds took a stranglehold on the game.  It was Leeds who were winning the second balls, it was Leeds who were playing the more cultured Football.  Tonge looked a revelation on the left wing and behind him even Pugh looked solid and confident.  Just what had Warnock fed his team before the match?  Clearly a large helping of self belief for starters.  Diouf was revelling in the abuse he was getting from the away fans even finding time to blow them a few kisses.  Austin was cruising about in midfield like a Battleship destroyer and Michael Brown was snapping at the heels of anybody in a blue shirt.  Everton's willingness for the fight seemed to be drooping like Fellaini's hair in the incessant rain. This was magic.

As the game flew towards half time Leeds looked the most likely to add to their early goal.  White tested the Everton goalie once again before Pearce took a heavy blow to the head and had to have a Kisnorboesque bandage before returning to the fray.  Ashdown had dealt with the little Everton had created helped by a wayward shot from Anchovies when he should have at least hit the target.  In stoppage time I thought we were two up as Becchio rose high at the far post and headed the ball goalwards only to see his effort cleared off the line by Naismith. Leeds left the field to a thunderous ovation after one of the best 45 minutes they've played in a long time.  All 11 in white shirts were stars with Diouf leading from the front.  Byram had recovered from an unsteady start when he seemed to be intent on playing some testing 40/20 balls into touch?

Moyes sent on Pienaar and the ex Salford Yank pin up boy, Phil Neville, to try and shore up his creaking midfield.  Leeds continued playing a mixture of pressing and passing football that thwarted Everton.  Diouf was sublime in everything he did whilst Austin ruled the centre circle area like a roman gladiator.  Chances fell to Leeds, Diouf skimmed a cross dangerously into the 6 yard box and then Byram danced into the box and shot.  This was too good to be true. An under strength Leeds team were standing toe to toe with the Premier League form team and winning the battle.  Pienaar did add a bit more class and vigour to the away attack though as Everton finally decided they might want to reward their large following with some passion but when a deep cross found Naismith at the back post he headed the ball into the expectant fans behind the goal.  This was going to be our night?

On 68 minutes Leeds were two up.  Everton chose to leave Pugh unmarked on the edge of the box at a corner so Diouf rolled the ball for him to shoot goalwards.......Austin deflected the ball into the net and cue mass celebrations.  Elland Road was alive with ghosts of cup nights past as the old stadium delivered another memorable night............and it was Tuesday!  At two nil Leeds were now fighting tooth and nail to deny Everton.  Bodies were thrown at shots, any ball into the box was headed clear as the game entered the last ten minutes.  Thoughts of Wembley prematurely entered my mind but I was soon brought back to earth as Distin pulled one back for the blues with 9 long agonising minutes still to play.  Everton now threw the kitchen sink at Leeds looking for the equaliser.  Everton went up for a penalty claim and 16,000 fans held their breath.............play on waved the ref..............relief all round as the seconds ticked away.  Finger nails gave way to pure bone as the four minutes of added time started but Leeds possessed the one player with true star quality on the pitch, El Hadj Diouf, who controlled vast swathes of the added time with his clever possession play.  Finally the ref blew his whistle to a crescendo of relief from the Kop.  Leeds 2.1 Everton and we were in the next round together with a winning bet for yours truly.  Fan bloody tastic!

This was a performance straight out of Neil Warnock's top draw.  We scrapped for every ball and pressurised Everton into mistakes together no little display of skills as White, Byram, Lees, Pearce all enhanced their reputations whilst Brown, Ashdown and Pugh slotted in as if they'd been regular first teamers all season.  The man of the match and all round king of the night was Diouf.  He teased and hounded the Toffeemen from start to finish with his unerring ability to control the ball and release telling passes.  He is already an absolute hero at Elland Road.

So in the end the rain couldn't prevent a Diouf inspired Leeds from chewing the Toffeemen up and spitting them out of the League Cup.  Such a sweet game!  Onto Bristol in good heart for Saturday's League clash.  What a difference a week makes in Football.  Who'd have thought we would have bounced back from the Hull defeat with two rousing victories?  Funny old game isn't it?

And what did daughter Sarah think of it?  "Awesome Dad...........is it too late to get a season ticket" She gushed still high on most potent drug known to man............Leeds United.  Roll on Saturday and another three points? That'll do nicely!