FA Cup 3rd round day always used to be one of the special days of the season.  This was the day when the minnows met the aristocrats of Football in the oldest cup competition in the world and the football public craved shocks to gloat and marvel at.  Things have changed though.  The FA Cup is now seen as almost an inconvenience not only for the Premier league teams but also a lot of championship outfits who will rest their players so that they are ready for the next big league match.  Such a shame.The apathy of the clubs for the competition has spread to fans in recent years as crowds have dwindled even in the latter stages as teams get a sniff of Wembley.  So I wasn't expecting a massive crowd at Elland Road for our clash with Birmingham who with all due respect are not exactly a glamour club are they? 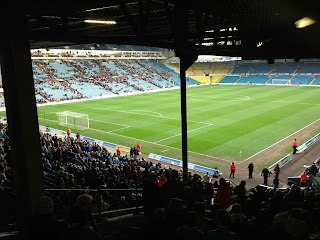 The first indications that the crowd was going to be tiny was when we reached Leeds station.  There was nobody about.  "There is a game on today isn't there?" I enquired of the Happy Chocker.  The shuttle bus was quiet and the lack of fans at Elland Road as we arrived indicated a mega low turnout. Mmmm maybe the marketing department at Leeds United should have made a bit of an effort on this one? Cheap tickets and kids go free would have surely boosted the crowd and got some of the stay aways back to LS11. But this was a missed opportunity. Once inside the ground the swathes of empty blue seats were a shock to even  the most pessimistic estimates. A paltry crowd of 11,400 had bothered to turn up.  We were going to need a thrilling match to lift the atmosphere for this one.

Warnock was absent with the dreaded virus that seems to be sweeping the country.  Presumably there were at least 10,000 Leeds fans with the same virus? Mick Jones and Ronnie Jepson were in charge of the team and had made significant changes to the team that beat Bolton. Ashdown replaced Kenny in the goals.  Drury, Tate, Pearce and Lees across the back, Brown and Norris in centre midfield with White and Hall on the flanks.  Ross Mac and Becchio were up top with Byram, Diouf and Somma amongst the subs.  Not the most constructive centre midfield pairing we've ever played! In recent games with Birmingham we've always suffered by shipping too many goals usually to Zigic.  So to help the cause HC and I sneaked into the Birmingham dressing room bound and gagged him and locked the 6ft 7" striker in the toilet.  At least he wouldn't score today.

The game kicked off in an atmosphere more akin to a reserve game.  Oh how the FA Cup has fallen from grace.  The opening exchanges were almost end to end as both teams seemed willing to throw caution to the wind.  Redmond and Burke caught the eye early on for Brum and Morrison tested Ashdown with a decent shot.  At the other end Pearce hit the up right with a header in front of the deserted South Stand.  Then Norris burst through twice to test the Blues goalie.  Maybe this was going to be a good match after all? 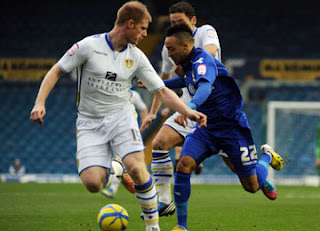 Birmingham were getting the upper hand though as Leeds allowed their West Midland's opponents far too much space in midfield.  On the half hour Wade Elliot took full advantage of Leeds' generous marking as he picked the ball up on half way and ran unchallenged to the edge of the box before hitting an unstoppable shot into the top left hand corner of the net.  1.0 Birmingham.  As the game headed for half time Birmingham tightened their grip on the game assisted by a pedantic ref, Chris Foy, and a seemingly blind linesman who allowed Redmond to twice go free when he looked yards offside.  Birmingham didn't make good use of their  opportunities though as poor finishing let them down time after time.  Half Time 1.0 Birmingham.

Leeds had spluttered in the first half giving up possession far too easily.  On the flanks both White and Hall were sadly ineffective.  Hall in particular looked hopelessly out of touch as time and again he lost the ball in promising and dangerous positions.  White scuttled about on the other wing without creating anything.  Ross Mac also looked out of sorts up front.  All in all after the Bolton game this hadn't warmed the cockles of the fans hearts............rather added a couple of lead weights to them!  Understandably the Urinal philosophers weren't impressed with most of their venom reserved for Ryan Hall and the ineffective midfield.  Warnock might have been on his sick bed but he moved to change things sending a message to replace Hall and White with Diouf and Byram at half time on the basis of Thom Kirwin's commentary on Yorkshire Radio. Even for Leeds Utd that must be a first, the manager changing the team because of what he heard on a radio commentary?

The subs had the desired affect though as both Diouf and Byram were immediately in the thick of it.  This was better and just two minutes into the second period Becchio had a glorious opportunity to equalise as he got goal side of his marker and latched onto a through ball before stinging Doyle, the Birmingham goalie's, hands rather than hitting the back of the net. He should have scored.  This lifted the home crowd as they hoped for a swift equaliser to fire the game into life.  There was a better balance to the team now but a 2nd Brum goal would kill the game and Leeds continued to look very vulnerable to the pacey away team.  It was a good job none of them appeared to be able to finish with the same style they opened up the Leeds defence.  Diouf and Byram continued to have a positive influence on the game and on the hour Leeds got their reward. For once the solid Brum back four looked vulnerable as Norris skilfully sliced them open with a sweet bit of skill that left Becchio free in the box.  The Leeds top scorer expertly finished despite the attention of the Blues defenders.  Get innnnnnnnnnnnn. 1.1.

Now can we go on and pinch the winner?  Neither side wanted a replay and certainly this fan didn't fancy a trek to Birmingham on a wet Tuesday night.  In true Leeds style they allowed Brum straight back into the game as Redmond once again easily got free of his "marker" before wasting a glorious chance to score.  On 67 minutes Becchio challenged for the ball with Packwood and the Birmingham player fell awkwardly.  From the player's immediate reactions it was clear this was a serious injury.  The medics made him comfortable before stretchering him off the pitch and direct to hospital with a broken leg. Ouch!

The long stoppage understandably took some of the sting out of the game as both sides looked for the goal that would avoid the dreaded replay.  Somma replaced Tate for the final 10 minutes but the final onslaught was more like a final whimper as the game petered out to a 1.1 draw.  Brown wasted a good chance in added time as he hit a loose ball from the edge of the box high into the Kop.  Sort of summed the game up.
Full time 1.1.

Pearce battled well at the back together with the solid looking Drury at left back.  It remains a mystery why he doesn't get more game time.  Lees looks uncomfortable at right back and Norris drifted in and out of the game but had two or three telling impacts the last one leading to Becchio's equaliser.  Diouf and Byram added some class to the 2nd half but there were very few fans leaving the stadium with smiles on there faces.  This wasn't a classic. Becchio notched his 19th goal of the season and yet again defied his critics in another battling performance.

So at least we are still in the 4th round draw and the possibility of a glamour tie to motivate us at St Andrews on the 15th Jan.  Macclesfield or Luton away anybody?  Before the replay we have a little matter of Barnsley away to look forward to.  3 points at Oakwell will do nicely thank you very much.  It would be nice to think NW will have strengthened the team by then? Once again breath is baited.

Posted by Andrew Butterwick at 21:01