Warnock banks on Barkley bringing joy for Leeds at Oakwell.

Expectations that Leeds United would take the transfer market by storm with the backing of their new owners have been quickly dashed as the transfer window reaches the half way stage. The signing of Michael Tonge is solid rather than spectacular and today's loan signing of Everton's under-21 starlet Ross Barkley has created a ripple of optimism amongst Leeds fans weary of a diet of over expectations in recent transfer windows. Barkley comes with good references and if he lives up to his perceived potential he will buck the trend of recent Premier League loanee disappointments to beat the path to Elland Road....... Livermore, Bannan, Townsend, Thomas etc.  Just the memory of those flops sends a shiver down my spine. 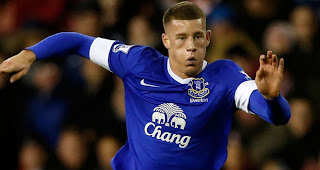 There is a familiarity about the transfer window that worries a lot of fans though. We have tried to sign 8 or 9 players but without success according to NW. The spirit of the Prince of Darkness lurking in the shadows of Leeds Utd, Shaun Harvey, is still alive and well as we fail to get deals over the line. Mmmmm I think we've been here before. To be fair January is not a good time to pick up quality players. The ones that are any good are already tied up and the ones that are available tend to be damaged goods. Still the rabidly expectant mighty whites fans will be looking for a signal from this month's dealings that we have at last got some cash to splash. If not the joke that we have bagged the only poor Arab owners in the world will gather pace. With a demanding schedule of games in February looming including games against Cardiff, Wolves, Posh, Blackpool and Blackburn in the League and the cup replay against Brum mixed in NW will certainly be judged by the fortunes of those games. Of course if we beat Brum we will also have another cup game to fit in against Spurs. If we put a run together we will be well and truly in the play off mix if not we will facing another anti climax to the end of the season. Time for Mr Warnock to earn his money me thinks?

Of course before that we have the small matter of a local derby with the Dingles of Barnsley. As we know our record against the South Yorkshire Reds is woeful at Oakwell. In the last three games there we have shipped an embarrassing twelve goals with the last two games definitely entered into the Leeds United Hall of Shame. This year will be different though. Barnsley are bottom of the league, they have just sold their best striker and are currently mangerless after the sacking of Hill. So what could possibly go wrong? Well on Planet Leeds quite a lot in my experience. I don't think it will this time though. If Barkley can give us a bit of creativity and a different out ball to supplement Diouf I think Leeds will stroll to a comfortable 3.1 win. Now that would be a nice feeling to inspire the 5,000 travelling fans on their trip back up the M1?

So fasten your seat belts we are about to ride the early year roller coaster that so often disappoints the die hard Leeds fans. Will we stay on the ride until May? Will Warnock work his promotion magic? Will the new owners provide a magic Carpet ride to the premier league? The next few weeks will tell.

MOT
Posted by Andrew Butterwick at 00:09

Andrew - just to say always enjoy reading your blog. Me and the family are big Leeds fans but based in Eastbourne rarely get to Elland Road - just the southern away games (Brighton/Palace etc - although we did get down to Bodmin in the summer), so its great to read the reports from someone who goes to all and like the way you post them up so quick. My boy (13yr old) always wears his Leeds shirt with pride - despite all his mates comments! I run a website (www.heartfootball.com) and produce footy badges (particularly LUFC ones). Contact me guy@heartfootball.com - and I'll send a couple up to you as a thanks for what you do with the blog.
Agree with your prediction for todays game (hopefully!). Keep it up mate - Guy MOT

Guy,
Thanks for your kind words Guy.
MOT