2,600 Leeds United fans had shuffled work commitments to get to the King Power stadium in the hope of seeing the mighty whites keep their flickering play off hopes alive. The play offs are still a long shot but a win against a strong Leicester side was what was needed to give us that spark of hope for the trip to Palace at the weekend.  The mood amongst the faithful congregating on the concourse before the game was cautiously optimistic.  After all we had kept three consecutive clean sheets and all of a sudden the 4.3.3 system seems to have given Leeds a better shape. Warnock stuck with the same team as Saturday. Could they deliver the goods away from home and on a Tuesday night? History would suggest not but that didn't stop the travelling hordes lifting the decibel level as the game kicked off. 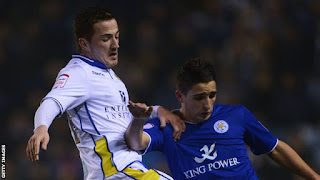 The Foxes started brightly with their confident passing style opening Leeds up twice in the opening ten minutes but their finishing didn't match their build up play.  Leeds were not over awed though and their hard working pressing style in midfield soon sparked attacks on Schmeichel's goal. Young Sam Byram ghosted in at the back post and tested the ex Leeds goalie with a firm header that the son of scum punched away in dramatic style. Next up Norris fired goalwards whilst at the other end Kenny was kept busy keeping out a viciously deflected shot before scrambling across to tip another goalbound effort over the bar.  Leeds were giving as good as they got though with both Byram and Warnock causing trouble down the flanks.  Ross Mac was having a busy game stretching the home defence wherever possible.  Norris popped up again in the box but pulled his shot wide.  Leicester finished the half putting pressure on the Leeds goal but the resolute defence held firm.  Half time 0.0 and an excellent showing from Leeds.  Full of energy and no little threat on Schmeichel's goal.  The only downside to the half was Morison's inability to make any impact on the game.

The half time penalty shoot out between Leeds and Leicester girls was entertaining especially when a Leeds girl who was no more than two foot tall rifled the ball into the top corner of the net.  Get in! Leeds started the second half with determination and were soon on the front foot.  Byram was causing havoc down the flank with his link play with Green and Ross Mac and from one classy run his cross was turned behind for a corner.  This was more like it..................but we never score from corners do we?........Well we did this time as Byram sneaked in at the back post and hammered the ball home from six yards. 1.0 Leeds. Get innnnnnnnnnn!  The players and the crowd celebrated the goal with an eruption of joy recognising that this goal could just be the one to fire Leeds back into the play off picture. Mint.

Leeds were now on fire as they looked to put the home side to the sword.  Norris, Ross Mac and Green all had good chances to get the killer 2nd goal but Schmeichel was equal to everything that was thrown at him.  Byram continued his raids down the flanks and sent over two gift wrapped crosses begging to be headed home but Morison failed to take advantage of either of them.  After the 2nd failure plenty of fans around me were speculating what Mr Becchio would have done with those crosses.  Leeds's purple patch fizzled out as they sought to hang onto their precious one goal lead.  Pearson shuffled his pack with twenty minutes to go as they went all out for an equaliser.  The Leicester crowd stuttered into life led by the roly poly drummer, cue "We're Leeds United we don't need a drum" and "he's eaten his drum, he's eaten his drum your fat bastard has eaten his drum" from the Leeds fans.  Kenny's goal was under siege though as bodies were flung in front of shots and Kenny flung himself from one side of the goal to the other to maintain the pristine clean sheet.

Norris had a golden chance to wrap the game up as he went one on one with Schmeichel but somehow the ball stayed out. Bollox! 5 minutes to go and the pressure was building on the men in white. Corner after corner swung into the Leeds box.  Header after header kept the ball out. 90 minutes were up but 4 minutes of added time to endure.  Nerves were jangling around me.  "I can't watch" HC muttered as we conceded another corner but once again we were equal to the vicious inswinging corner.  Schmeichel was now helping the attack. 93 minutes gone and yet another corner. I had no nails left. The corner came in and Keane rose unchallenged at the far post and headed an equaliser that felt like a stake through the heart of the Leeds resistance.  The home crowd were jubilant whilst the travelling fans watched in stunned silence.  Another late goal away from home had drained the blood from the Leeds play off push.  There was still time for a last desperate Leeds attack but to no avail.  Final score 1.1. Leicester will feel they deserved the equaliser but in truth it was very cruel on Leeds.

Despite yet again snatching a draw from the jaws of victory this was a good performance from Leeds.  Byram was outstanding as were the three man midfield.  If only we were more clinical in front of goal?  Morison looks laboured and out of touch up front.  Ross Mac had a decent game.  He just needs a goal.  Warnock had another impressive game at left back. Not for the first time this season I have left an away ground overcome by frustration at dropping points that we could have secured.

The journey home was a nightmare in the thick fog only lightened by the constant bleating of Manure fans on the radio bemoaning the fact that some referee had apparently scored two goals for Real Madrid to knock them out of the Champions League, tough shit.......better still Sir Alex Rednose was "too distraught" to attend the press conference.  Man up Fergie what do you think it feels like to concede an equaliser in the 93rd minute at Leicester? Get a grip man.

A win at Palace will give us the 7 points in a week we were looking for. If we can perform like tonight and convert our chances you never know? Mission Impossible still possible?

MOT.
Posted by Andrew Butterwick at 01:36