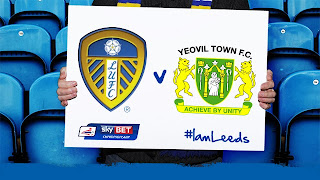 The winter chill in the air reflected the current mood on Planet Leeds. Even the visit of the mighty Yeovil Town, currently struggling in the relegation zone, couldn't inspire a unanimous expectation of three points from Leeds' latest championship clash. The only consistency Brian McD's charges have shown this term is inconsistency so it was anybody's guess how this afternoon's game would turn out and therefore it was with cautious optimism that I boarded the Leeds bound train at Selby with the Happy Chocker and the Quiet One. News that our new signing Zaliukas had been added to the squad and Byram could be missing with another injury didn't exactly brighten the mood. "Zaliukas has played in the two development games when we've conceded a total of 7 goals" HC announced. Mmmm not exactly the statistic I was hoping to hear!

A surprisingly healthy crowd of 25,000 were assembled inside Elland Road ready for kick off. You could here a pin drop as a poignant rendition of the Last Post pierced the West Yorkshire air in recognition of Armed Forces day and Remembrance Sunday. A sobering reminder of those who have lost their lives serving their country in the name of war over the years. That wasn't the only celebration though as the legend who is Norman Hunter was presented with a cake for his 70th birthday. Norman "Bites yer Legs" was one of my heroes in my formative years.  All of a sudden I felt old!

Brian McD made one enforced change to last week's team with Pelts coming into the right wing back role in place of Byram. Zaliukas and Diouf were on the bench along with last weeks goal scorer Blackstock. 500 fans had made the long trek from Yeovil hoping to see their team do better than their 3 previous visits to Elland Road where they had failed to score and returned to Somerset pointless each time.  They did beat Forest last week though!

The match kicked off in a swirling wind with the visitors wearing a ludicrously luminous away strip that made our "glow in the dark" effort look like an army camouflage uniform. Leeds started the game confidently and so nearly reprised last week's early goal when Mowatt tested Hennessey in the Glovers goal after good work from Smith and Austin. This should have inspired Leeds to push on and take the game by the scruff of the neck but it was the visitors who settled the better.  Kenny pulled off a super save from a Yeovil attack with the linesman's flag fluttering for offside as Yeovil's pacey frontman troubled the Leeds defence. The swirling wind didn't exactly help the quality of the play as Leeds struggled to find the necessary fluency that a home side need to dominate games.  Austin was making some driving runs from midfield though and tried his luck with two long range shots that failed to trouble Hennessey in the visitor's goal.  On the half hour mark Smith should have converted a glorious chance from 6 yards but failed to make contact with the ball and the chance fizzled away. It was that sort of game.

Entertainment was in short supply in the first 45 minutes although seeing Jason Pearce move to left wing back after Zaliukas replaced the injured Warnock did spark some interest amongst the home fans. Pearce, like all centre halves, is a frustrated forward at heart so he grabbed the chance to venture forward with both hands. This could be interesting I mused.................but then again there wasn't much competition in the "interesting" category on the basis of the first half.  The ref blew his whistle for the end of the half. 0.0. 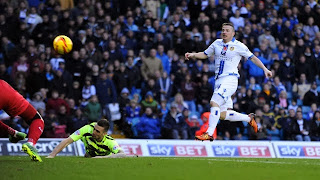 The urinal philosophers weren't too impressed with the first half display. "Same old rubbish" was one punter's view whilst another thought "McCormack's a waste of time" It is a well known scientific fact that beer can seriously affect your judgement and the last comment more than supported that theory! In truth the half was uninspiring and Leeds were in desperate need of some spark of quality to lift the team and the crowd. That spark came just 3 minutes after the restart. Mr "Waste of space" McCormack thundered forward on the shoulder of the impressive Austin who powered through the centre of midfield like a raging bull before releasing the Scot with a perfectly weighted pass. Ross Mac took one touch before rifling a rocket like shot past the Yeovil goalie. 1.0 Leeds and a massive roar of relief filled the Beeston air. 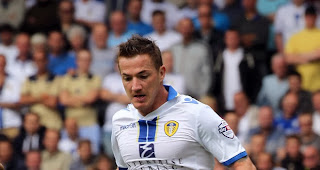 Yeovil were still having the Lion's share of possession though in the blustery conditions. Wootton was just holding the Leeds defence together at the back as the Glovers pushed on for an equaliser. Blackstock replaced Smith on the hour and almost repeated last weeks feat of scoring with his first touch. Ross Mac won the ball and picked out Blackstock who had drifted off his man and found space in the box. His shot was deflected agonisingly close past the post for a corner. Austin was beginning to gain some dominance in midfield with his barnstorming runs but his choice of when to shoot and when to pass prevented Leeds from adding to their single goal.................that is until the 68th minute when he threaded a superb ball through to Ross Mac on the edge of the box who thundered in his second of the match. Some "waste of space"! 2.0 Leeds.

Yeovil pushed forward in vain to try and get back in the game but Leeds closed the game out with a mixture of dogged defending and poor finishing from the Glovers. The game finished 2.0 to Leeds and another fruitless trip to LS11 for the Somerset men. Austin had a powerful game in midfield. Blackstock showed some nice touches when he came on whilst Wootton and Lees battled well at the back.  Ross Mac was my man of the match for the two goals that lit up this very average game. Why some fans slate him is beyond me? The new man Zakiulas had a quiet debut at the back.  This was a game that will be filed in the "forgettable" game archive for me.  A much needed three points though together with a clean sheet is not to be sniffed at in this ultra competitive league.

The high wind and driving rain tested the mood of the fans queueing for the delayed shuttle buses after the game as they huddled together like a herd of Emperor Penguins closing ranks to keep out the worst of the Antarctic weather. The win lifts Leeds to 8th in the table but the sensible inhabitants of Planet Leeds won't be getting too carried away with this victory safe in the knowledge that this rollercoaster of a season still has a long, long way to go. Next week's trip to Charlton will be a sterner test than today. It would be nice to go into the international break on a high though?

Posted by Andrew Butterwick at 21:08