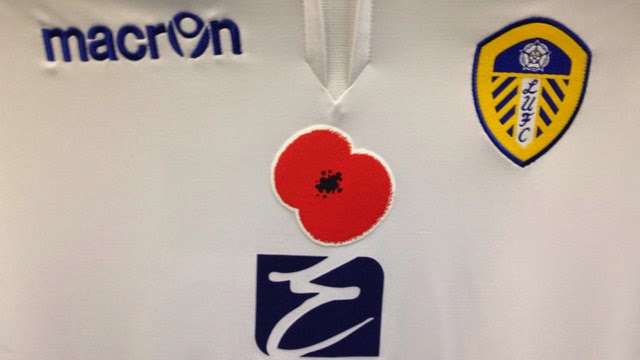 After yet another week of drama off the pitch I headed for Elland Road in the vain hope that there might just be an outbreak of football to keep the headline writers happy instead of the diet of winding up orders, Football League investigations and alleged new investment bids. Blackpool were the visitors to a decidedly grim and wet West Yorkshire with their collection of misfit players cobbled together in the wake of a summer of disastrous mismanagement of the historic club from their controversial owner Owen Oyston. Oyston, a convicted criminal who served 3 years in prison for rape, not only passed the Football League's fit and proper test  but has continually infuriated loyal Blackpool fans with his "cavalier" attitude to the running of their football club...............Mmmm sounds familiar?

As ever the Happy Chocker, Brother Chris and The Quiet One accompanied me as we assessed the prospects of picking up a welcome three points against the Division's basement club. After a run of 8 games without a win even the bottom club appeared to strike fear into some amongst me. Being the uber optimist I am I wagered a fiver on a 4-1 Leeds triumph despite the howls of derision around me. "Send for the funny farm he's completely lost it" was one of the printable comments I heard.

Not surprisingly Pearce replaced the suspended Bellusci in an otherwise unchanged starting eleven. Sharp and Austin returned to the bench after injuries. A poignant Last Post preceded a minutes silence in remembrance of the fallen before the game got underway. To say Leeds started with a bang is a like saying Blackpool's golden mile is slightly tacky. Refearn's young guns exploded into the match with an electric tempo and clinical passing to boot. It was a chance a minute as Antenucci and Doukara ripped the Blackpool defence to shreds as they gorged themselves on the continuous supply of ammunition from the eager Leeds team. Warnock and Byram were kings of the flanks with Cook, Mowatt and Adryan running riot in midfield. The inevitable first goal came after just nine minutes as Liam Cooper volleyed home from 20 yards after Blackpool failed to clear a corner. Wow! 1.0 Leeds.

The Leeds attacking machine was running like a finely tuned engine as wave after wave of carefully crafted attacks submerged the Tangerines. Joe Lewis was working overtime to keep out Leeds as Antennucci, Doukara and Adryan all tested the Blackpool keeper with the home crowd baying for more. If this was what Redfearn meant by getting his team to play with no fear then bring it on. Then as the clock ticked past 30 minutes Leeds doubled their lead with a magnificent team goal that will be remembered for a long, long time by those lucky enough to witness it in the flesh. First Cooper coolly brought the ball down in his own area and passed the ball into the midfield where swift first time passes released Adryan in the centre circle. The Brazilian sped away and headed for goal before releasing a slide rule ball to Doukara.............just when I thought he wouldn't get a shot away his big black leg stretched out to steer the ball into the corner of the net and send the 23,000 home fans into absolute delight. 2.0 Leeds and I don't think I've seen a better team goal since the Revie boys annihilated Southampton back in the 70's. To paraphrase Barry Davies...."It was almost cruel" 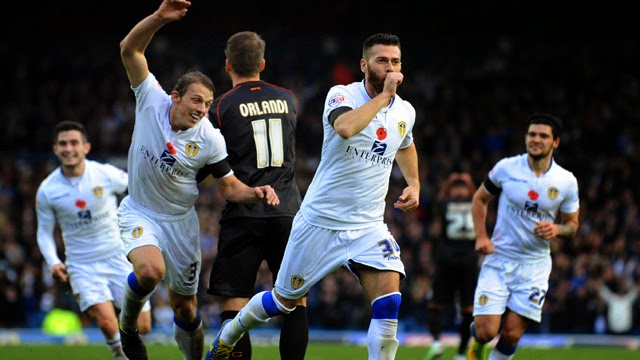 Leeds were now purring as they knocked the ball about with a swagger. O'Hara had replaced Blackman for Blackpool as the smiling Lee Clark tried to stem the Leeds dominance. Silvestri had hardly been troubled by the basement club's attack as he watched his colleagues go for Blackpool's jugular. Warnock was having another storming game at left back. If there's a better full back in the championship I'll gladly watch back to back episodes of X Factor. The ex Liverpool man was instrumental in the third Leeds goal as he combined with Mowatt to once again open up the Blackpool defence before slipping a ball to Doukara who beat the advancing Lewis to pull the ball back into the box from the bye line..............the ball fell nicely for new Daddy, Antennuci, who volleyd into the empty net courtesy of a slight deflection. Cue the baby celebrations with imitation dummies and the swinging cot........Awww bless. 3.0 Leeds. Unbelievable Jeff. Leeds were winning at a canter and it wasn't even half time. Peter Clarke saw a header go near for the visitors just before the half time whistle went. The home side trotted off to a thunderous ovation after the best half of football seen at Elland Road for a long, long time. Adryan was outstanding, Cooper was excellent and for once the finishing matched the approach play.

The half time urinal philosophers weren't as buoyant as you'd expect after a half of total domination by Leeds. "Hope we don't fuck it up in the 2nd half" one fan gruffly commented whilst another tempered the positivity with "Don't get carried away it's only Blackpool" We're a hard lot to please us Leeds fans. At 3-0 up it would be impossible to better the first half but surely we would keep steamrollering the Donkey Lashers? Errm well not quite.

Lee Clark changed his tactics to try and get his team back in the game. As a result the fluid, open football from Leeds was somewhat stymied as the home side got dragged into a scrappy battle with a number of dubious tackles that the remarkably tolerant ref, Stuart Atwell, chose to not punish with a card of any colour. Nile Ranger started the 2nd half for the Tangerines. The south Standers soon reminded the Pantomime villain that he has a lot in common with his club's owner. He is a big unit though and started to cause problems for the Leeds defence as he and Miller looked to benefit from a more direct approach from the seasiders. Leeds were given a warning on 58 minutes as Ranger missed a headed chance from 8 yards. The flow of chances for Leeds had dried up so Redfearn reached for the subs board and sent on Austin for the tiring Adryan. The young number 9 received a standing ovation as he left the pitch. Tonge also joined the fray in place of the injured Bianchi as nerves started to twitch amongst the home fans even though we were still three up.

On 75 minutes Nile Ranger headed a simple goal to get the visitors back in the game. Panic started to percolate around the ground as the nervy home fans contemplated a another possible capitulation of epic proportions. Don't panic I found myself shouting just as Antenucci so nearly made it 4 after a goal mouth scramble. Leeds had lost their way though and now it was a case of digging in and seeing out the game for the precious three points. Billy Sharp came on for a cameo and despite 6 minutes of added time the game finished 3-1 to Leeds.

Once again this had been a game of two halves in terms of performance but the sheer dominance and quality of the first 45 minutes was more than enough to win this game. Cooper was outstanding. His reading of the game is excellent and will certainly give Redfearn a selection headache once all the centre halves are available. Adryan was simply breathtaking at times and adds such a different dimension to this young Leeds team. Byram and Warnock both had good games and posed a real threat each time they raided the flanks. For me the influence of Redfearn is there for all to see in the way the team are playing with a much higher tempo coupled with a willingness to pass the ball in all areas of the pitch. With patience his team should prosper.

After the international break we have testing games against Blackburn, Derby, Ipswich, Fulham and Forest before welcoming Wigan to Elland Road on Boxing Day. If Redfearn can continue to improve the team through this run of games we should be nicely placed come Xmas day?

MOT
Posted by Andrew Butterwick at 20:29