There is an unwritten rule in football that states Leeds United will never beat Derby County.......well at least that's been the case in the last 12 meetings between these two old foes so it was with a large dose of trepidation that I headed for the Theatre of Hope for our latest clash with the Rams. As usual the Happy Chocker, Quiet One and Brother Chris were on board together with the Quiet One's mate Brian who happened to be a Derby fan..............could be interesting?

After last week's surrender of a one goal lead to Blackburn a lot of the pre match debate in the bar concerned the actions of a certain Mr Varney in securing the match winning penalty for Blackburn. He wasn't the most popular player when he wore a Leeds shirt and after his Oscar winning dive he's now right up there in the top 5 of most hated players at Elland Road. The vicious talk of the Blackburn game soon disappeared once the news that Noel Hunt had scored a late winner for the Tractor Boys filtered through.................absolutely unbelievable! He spends 18 months at Elland Road and scores no goals but pops one win within 10 minutes of coming on for Ipswich.... you couldn't make it up. So there were oodles of negativity sloshing about the stand as we took our seats.

Pearce had lost his place to Bellusci as Redfearn opted for a more traditional left/right foot pairing at centre back with the impressive Cooper ensuring the Leeds captain would start the game on the bench. Before the game there was a minute's applause in memory of Blake Cairns and his four friends who lost their live's so tragically in the Conisborough car crash. In a poignant touch after the applause every Leeds player went to the sideline to give Blake's brother, Alex Cairns, a hug before the game got under way.

The opening exchanges were played at lightening speed as table topping Derby swaggered into attack looking to extend their grip on the summit of this very competitive league. Jordan Ibe, on loan from Liverpool, looked as slippery as an Eel as he attacked the Leeds right flank creating the first chance of the game for Hendrick who pulled his shot horribly wide. In a different century games between these two rivals were always one bad tackle away from a brawl and it seemed this tradition was carrying on as "robust" tackles flew in from both sides. Bianchi earned a yellow for scything down Russell whilst Christie soon followed him into the ref's book as the game threatened to boil over after just 15 minutes.

Leeds weathered the early Rams pressure well and started to threaten the Derby backline with some neat football led by Cook and Mowatt in midfield and Antenucci's intelligent running up front. Chances started to appear for the home side, Antenucci's wasted a good chance after excellent work from Warnock before a barnstorming run from Mowatt saw him finish with a low shot that Lee Grant turned round the post for a corner. Things were starting to look optimistic for the home fans as the clocked ticked past the half hour mark. For the record Cooper and Doukara had picked up yellows along with Mascarell for Derby, as the war continued. Warnock was peerless at left back playing a true captain's role with a number of perfectly timed last ditch tackles one of which saved a certain goal on 36 minutes.

Leeds were building a head of steam though and Doukara was the next to try his luck but his low shot curled wide of Grant's post. The high energy pressing game had knocked Derby off their stride and Leeds got their deserved reward on 42 minutes. Antenucci won the ball back from the Derby defence before attempting to release Mowatt down the left............the ball ran kindly for the visitors but Mowatt didn't give up and somehow came up with the ball near the corner flag and raced at the panicking defence before laying the ball back to Antenucci who opened his body and slid the ball past the helpless Grant. Get innnnnnnnnnnnnnnn! 1.0 Leeds and the decibel level lifted in LS11.

Derby finished the half with a flourish as they pressed Leeds but the whistle went to leave Leeds leading by Antenucci's goal. A thunderous ovation accompanied the Leeds team off but could we hang onto the lead? The Urinal philosophers were in full flow in the half time debate. "we've gone from not tackling last week to kicking them off the pitch this week" one fan thought, "this is f****** winnable" shouted one optimistic fan. "we've been here before though let's try and keep the lead this week" another cautioned. Mmmm should be a terrific 2nd half I thought as I took my seat for the next 45 minutes. 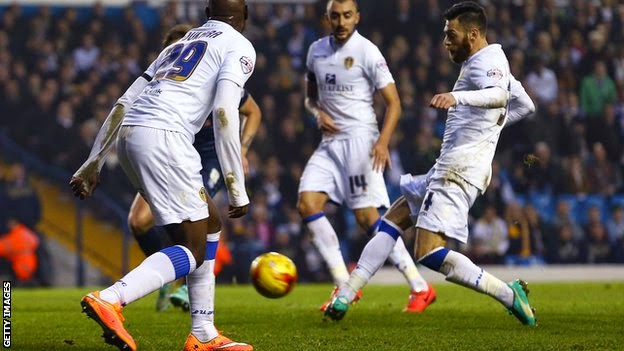 Leeds launched an immediate blitzkreig of the Derby goal as they went in search of the oh so important next goal. Doukara found room and attempted a shot but it crept wide but Leeds weren't to be denied. Mowatt exchanged passes with Warnock who thundered into the Derby box to pick out Antenucci on the penalty spot who passed the ball beyond Grant into the Derby net. 2.0 Leeds and the Theatre of Hope was rocking. "Top of the League you're having a laugh" rang out from the ecstatic South Stand as they taunted the sell out away support.

With Derby pushing on looking for a goal to get them back in the game Leeds started to pick them off on the counter. Sam Byram got on the end of a swift Leeds attack and drove into the box before testing Grant with a left foot shot. Russell chopped Adryan down on the hour mark to get onto the Ref's bulging yellow card list before the Derby boss McClaren sent on Bryson, Dawkins and Thomas to try and change the game. The Rams were now charging forward in a more direct 4-3-3 formation which opened up space on the flanks. Nerves started to flutter amongst the home fans as the pressure started to build on the home defence but time and again a Leeds body would block the desperate Derby shots.

Stephen Warnock epitomised the spirit of the Leeds team with another goal saving tackle on the prolific Chris Martin with just minutes remaining.............a goal then would have definitely brought on a massive attack of squeaky bums in the home crowd. Leeds had chances at the other end with Antenucci going near to completing his hat trick with a stinging shot just over the bar. 4 minutes of added time arrived with Leeds still repelling all Derby's efforts. Tonge replaced Adryan who had had his best game for Leeds sprinkled with some stunning touches that had the Leeds faithful purring with delight. The referee's final whistle was greeted with unbridled joy both on the pitch and in the stands. After all not only had we held onto a lead we'd also kept a clean sheet........all against the League leaders. Add to that we'd finally beaten Derby for the first time in 87 years and for once a happy weekend was on the cards for us long suffering Leeds fans! Mint.

Captain Fantastic, Stephen Warnock, was my man of the match with a simply awesome display but Cook, Mowatt, Cooper, Adryan, Bellusci and the goalscorer Antenucci will all sleep well tonight after highly impressive performances against the best team in the league. There was a glow of appreciation as the fans streamed away from the ground high on that very toxic drug, a deserved win against a good team. If we can build on this performance you never know where it could lead? Don't you just love Football?

Ipswich away next week and a nine hour round journey into deepest East Anglia. Can Leeds continue where they left off here? Will Adryan add goals to his illusive running? Can Redders wipe the "smile" off his ex Barnsley colleague and opposing manager Mick McCarthy's face?

MOT.
Posted by Andrew Butterwick at 19:23